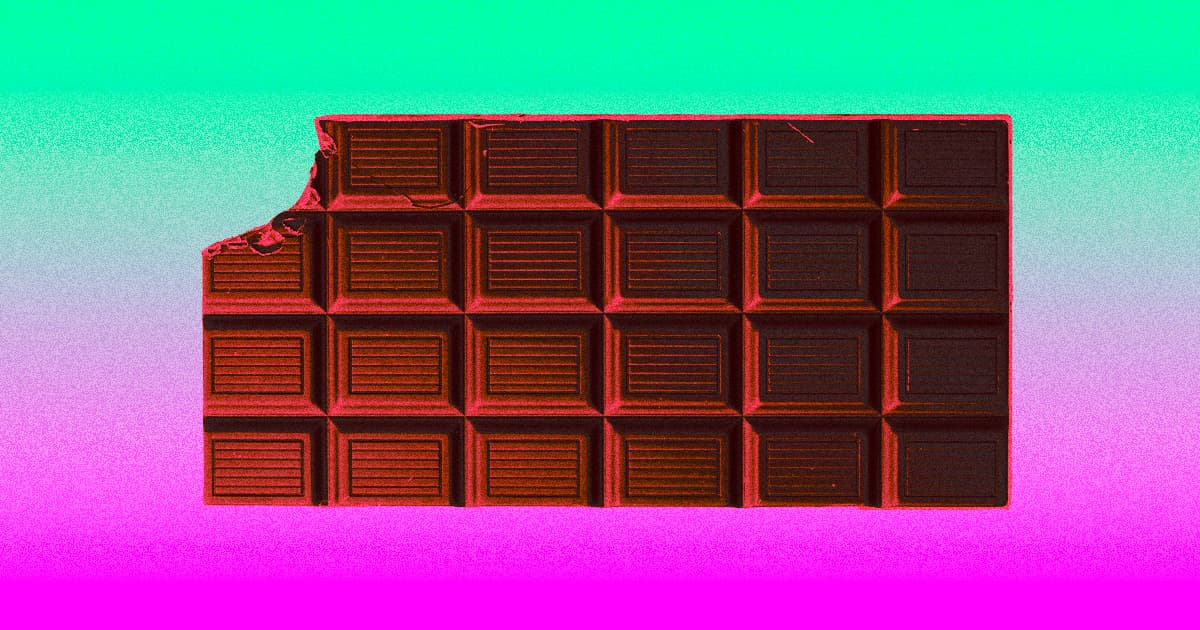 You may want to hold off on binge eating all the dark chocolates you're gifted this holiday season, because a new report by Consumer Reports found that many prominent brands contain worryingly high levels of dangerous heavy metals.

The independent nonprofit conducted tests on 28 dark chocolate bars, including popular brands like Hershey's, Godiva, and Trader Joe's, all of which were found to contain lead and cadmium.

Furthermore, CR found that for 23 of the bars, consuming just one ounce per day — roughly equal to a tiny chocolate bar — would be enough to put an adult over harmful levels of those heavy metals. According to market research cited by the report, around 15 percent of people eat chocolate daily.

That risk becomes especially acute in pregnant people and children, to whom the exposure to heavy metals — especially lead — could drastically hinder development and cause lasting brain damage.

"But there are risks for people of any age," said CR food safety researcher Tunde Akinleye in the report, noting that frequent exposure in adults can cause a host of ailments, ranging from nervous system problems to kidney damage.

Combine that with the heavy metal exposure from other foods like your veggies, Akinleye says, and you can easily accumulate dangerous levels in your body — even if you don't eat chocolate very often.

It's not all doom and gloom, though. Five of the bars, while still containing heavy metals, had relatively low levels.

"That shows it's possible for companies to make products with lower amounts of heavy metals — and for consumers to find safer products that they enjoy," Akinleye explained.

Ideally, consumers wouldn't have to rely on carefully reviewing independent studies and scientific literature just to pick some chocolate off the shelf as a last minute gift, but until then, CR offers the safest buying guide.

Among the five "safer" choices, Ghirardelli was the most prominent brand to feature. Meanwhile, brands like Lindt, Dove, Godiva, Trader Joe's, and Hershey's were all found to sell bars high in either lead, cadmium, or both.

Why dark chocolate, as opposed to milk chocolate, has such high levels of heavy metals is a complicated question. It seems to stem from dark chocolate's higher cacao content, the bean that chocolate is made from.

Michael J. DiBartolomeis, a toxicologist and a former California Department of Public Health official who led a 2022 study on cacao contamination, said that it appears lead is introduced into cacao beans after they're harvested and are left to dry in the Sun, during which dust and dirt containing lead falls on the beans. As for cadmium, it appears that the cacao plants derive it from the soil itself.

So does that mean giving up dark chocolate forever? Probably not, CR says, but it advises being aware of its risks and treating "chocolate as a treat," while opting for the brands with the lowest levels of heavy metals.

9.27.21 Studies
Half of American Kids Have Lead in Their Blood, Doctors Say
2.03.23 Developments
New Law Would Let Prisoners Donate Their Organs to Get Out Early
2.02.23
Unfortunate Redditor Says They Had Diarrhea in a Sensory Deprivation Tank
1.31.23 Studies
Flirting With a VR Hottie Might Help People Avoid Cheating, Experiment Finds
1.30.23 Neuroscience/Brain Science
US Surgeon General Warns Against 13-Year-Old Using Social Media