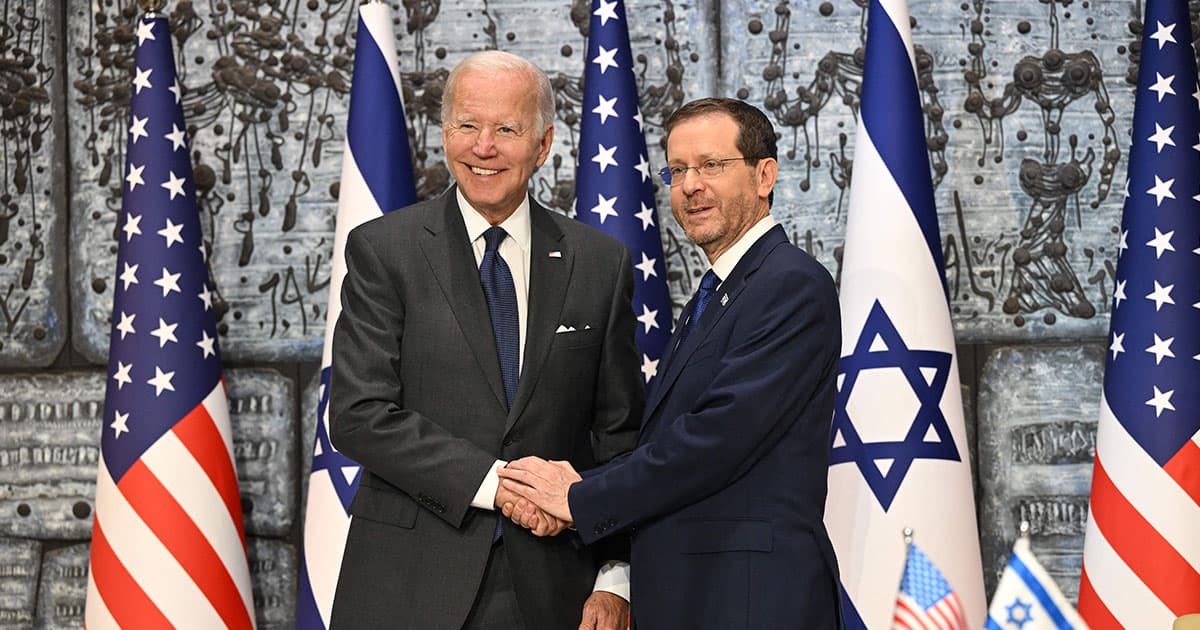 Some things last forever. Others, like President Joe Biden's no-handshake policy for his ongoing visit to the Middle East, last just a few minutes.

According to the New York Times, President 46 and his team had decided that in light of the newest coronavirus subvariant, Biden was to avoid shaking hands during his latest international trek to Israel and beyond.

"We're in a phase of the pandemic now where we are seeking to reduce contact," Jake Sullivan, national security advisor, reportedly told journalists onboard Air Force One while en route to Jerusalem. "I can't speak to every moment and every interaction and every movement. That's just a general principle we're applying.”

To the President's credit, he started off strong. A few politicians, including current Israeli Prime Minister Yair Lapid, were greeted on the airport runway with an ever-classic Biden fist bump.

But just minutes later, when the US leader was welcomed by former Israeli PMs Naftali Bennett and Benjamin Netenyahu, the anti-COVID effort apparently slipped his mind — the NYT reports that he heartily shook hands with both figures.

Even the best fall down sometimes. Still, the no-handshake policy, especially while traveling, is probably a good idea.

According to NPR, the latest ascendant variant, BA.5, is spiking numbers for both reinfections and hospitalization numbers. And according to experts, natural immunity has shown to be relatively ineffective against the fast-spreading virus.

"Not only is it more infectious, but your prior immunity doesn't count for as much as it used to," Dr. Bob Wachter, chair of the Department of Medicine at UCSF, told NPR. "And that means that the old saw that, 'I just had COVID a month ago, and so I have COVID immunity superpowers, I'm not going to get it again' — that no longer holds."

There is a bit of good news, though. While the overall numbers of infections are up, NPR reports that the death rate has yet to spike as a result.

Let's hope it stays that way. In the meantime? To keep our Hot Girl Summer going, we all might consider taking — and remembering — a few extra safety precautions. President included.

READ MORE: Biden Adopts ‘No Handshake’ Covid Policy, but Not for Long

More on other concerning illnesses: WHO "Concerned" Over Skyrocketing Monkeypox Cases

8.16.22 Genetics
Cops Use Newborn Baby's DNA to Nail Dad for Crime from the 90s
Unsettling.
By Noor Al-Sibai / Read More >>
8.12.22 Neuroscience/Brain Science
Evidence Is Growing That LSD Improves Learning and Memory
"[Psychedelics] should be seen not just as medicine, but also as part of human life at large."
By Lonnie Lee Hood / Read More >>
8.12.22 Devices
Experimental Synthetic Cornea Restores Vision for 20 Patients
"This opens up the procedure to many centers and rural areas that do not have eye banks."
By Noor Al-Sibai / Read More >>
Keep up.
Subscribe to our daily newsletter to keep in touch with the subjects shaping our future.
+Social+Newsletter
TopicsAbout UsContact Us
Copyright ©, Camden Media Inc All Rights Reserved. See our User Agreement, Privacy Policy and Data Use Policy. The material on this site may not be reproduced, distributed, transmitted, cached or otherwise used, except with prior written permission of Futurism. Fonts by Typekit and Monotype.