A dried up lakebed has proven to be rife with organic material. 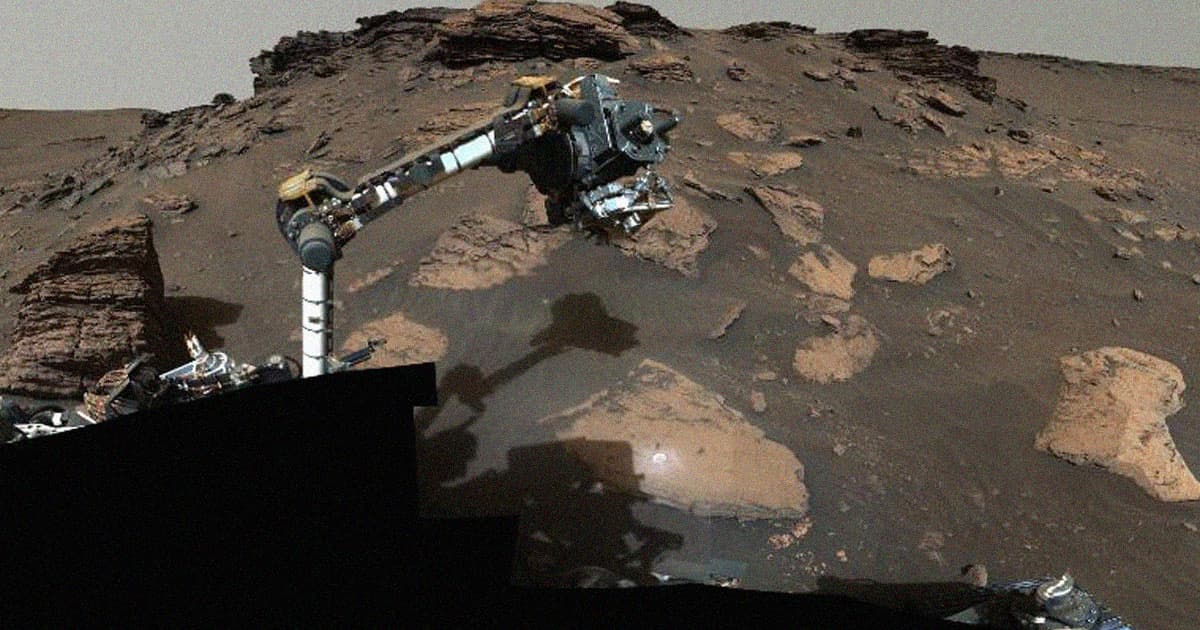 The search for evidence ancient life on Mars is ramping up, as NASA's Perseverance rover has already secured some potentially revelatory samples containing organic matter. The presence of organic matter isn't slam dunk evidence of life on the Red Planet, but it is a distinctly promising sign — and, perhaps most tellingly, agency scientists seem uncharacteristically excited.

Since July, the indefatigable rover has been roaming a dried up river delta in the 28-mile Jezero Crater, believed to have been home to a lake billions of years ago. So far, Perseverance has managed to collect four of these fluvial samples, which according to NASA scientists, boast the highest concentration of organic matter since the rover began its Martian mission 18 months ago.

What makes the samples such a great boon is the delta they were collected from. Where a river once flowed into the lake, it also deposited tons of sediment in distinct layers, making the delta ground a terrific preservation of Mars’ historical environment.

"The delta, with its diverse sedimentary rocks, contrasts beautifully with the igneous rocks — formed from crystallization of magma — discovered on the crater floor," said Perseverance project scientist Ken Farley at press conference on Thursday, as quoted by CNN.

"This juxtaposition provides us with a rich understanding of the geologic history after the crater formed and a diverse sample suite," Farley continued. "For example, we found a sandstone that carries grains and rock fragments created far from Jezero Crater."

Among the rocks sampled is a small formation of stone dubbed Wildcat Ridge, thought to have been formed at the bottom of the extinct lake when it was still around. In addition to collecting two rock core samples, Perseverance chipped away at the "ridge" and scanned the exposed interior of the stone using a specialized laser instrument known as SHERLOC (Scanning Habitable Environments with Raman and Luminescence for Organics & Chemicals).

What it found was organic molecules related to sulfate, likely meaning that as the lake was drying up, that particular area became highly concentrated in both sulfate and organics.

And when it comes to preserving organics, sulfate is king.

"On Earth, sulfate deposits are known to conserve organics and can harbor signs of life, which are called biosignatures," explained SHERLOC scientist Sunada Sharma, who works at NASA's Jet Propulsion Laboratory, at the conference.

"This makes these samples and this set of observations some of the most intriguing that we've done so far in the mission and fulfills some of the excitement that the team had when we were approaching the delta front."

As exciting as this all sounds, it's still possible that the compounds aren't the vestiges of former life, and instead could have been formed through chemical or geological processes.

And nailing down a definitive answer could take some time. As robust as Perseverance has proven to be, the rover isn’t equipped with the kind of scientific instruments necessary to declare the samples as containing biosignatures beyond a shadow of doubt. Instead, scientists will have to wait for the samples to be transported back home via NASA's Mars Sample Return mission, which isn't currently scheduled to arrive back on terrestrial soil until at least 2033.

Until then, Perseverance will continue to tirelessly collect more samples, and preliminarily analyze the rocks of the now-desolate Martian surface. Even off world, hope springs eternal.