Children just... do that a lot, okay? 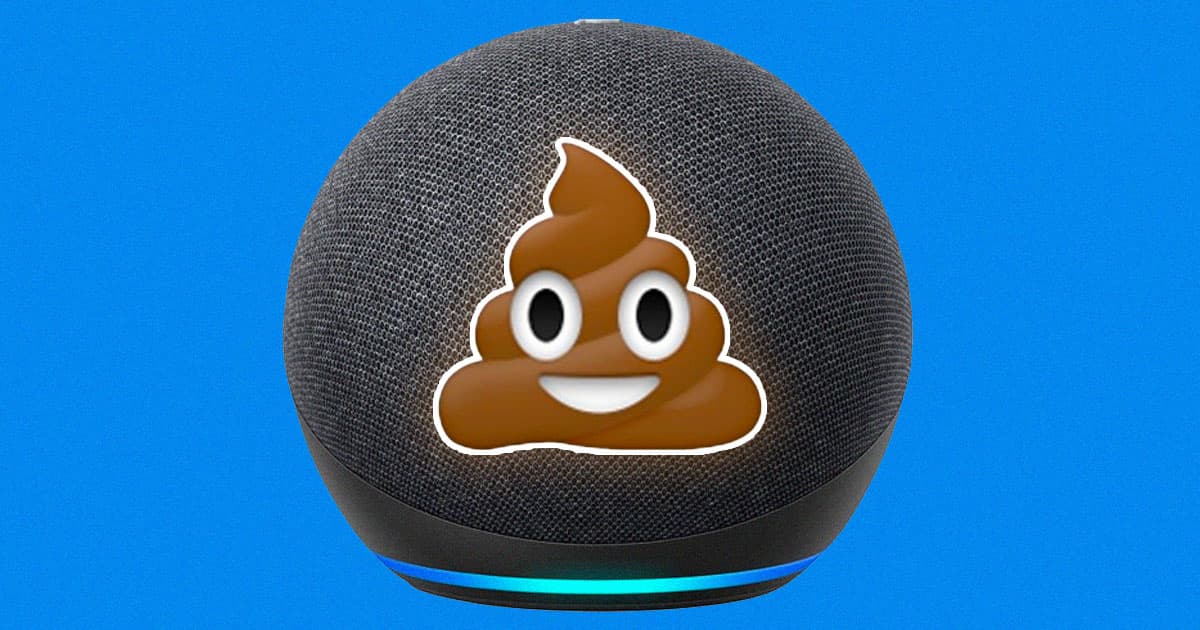 Many kids — and their parents — have stumbled on a fascinating discovery: that yelling “poop” at their Alexa devices made a certain song play.

New reporting by BuzzFeed about the defecation-themed songs reveals that the artists behind these gross and hilarious childrens’ songs found that as the streams have accumulated, so too have the royalties. In other words, hoping that children will yell “poop” at smart home devices is a sound business model.

The first artist profiled — Oregon music teacher Dan Helpish, who plays under the name Dandyland — told BuzzFeed’s Katie Notopoulos that he was shocked to discover his song “Poopy Stupid Butt” had become a pandemic favorite.

Helpish said that the song was written collaboratively between himself, his partner and music school co-runner Kristen Muir, and their special needs students when they prompted three students to come up with a phrase that had five syllables. One girl hollered “poopy stupid butt!” and the rest was history as the kids began riffing off of the theme, with Helpish writing down their muses’ every word.

The result was “Poopy Stupid Butt,” which Helpish uploaded to Amazon Music and subsequently forgot about until COVID-19 lockdowns began and kids were stuck at home alongside their parents and devices. The song that once garnered about $100 in streaming revenue per month suddenly began racking up plays, and ultimately the couple earned more than $10,000 in revenue from more than 10 million streams.

As Notopoulos notes from “lived experience,” children love to yell “poop” at Alexa devices, and when they do, songs like “Poopy Stupid Butt” tend to play. Another Alexa favorite, she found, are those written by SEO expert musician Matt Farley, who has a bunch of goofy songs about poop under the stage names “The Toilet Bowl Cleaners” and “The Odd Man Who Sings About Poop, Puke, and Pee.”

Though Farley suggested in 2021 that his poop songs were hits due to kids having fun in their parents’ Spotify accounts, he added in his interview with BuzzFeed that Amazon Music does account for his main streaming income, which lends credence to Notopoulos’ theory. (Amazon didn’t respond to BuzzFeed’s request for comment.)

“Amazon is at least 30% of my income, and the others go down from there,” Farley told the reporter. “It’s gotta be from Alexa. Amazon Music isn’t something big music fans use.”

Until Amazon confirms or denies that children yelling “poop” at Alexa devices has resulted in a huge streaming uptick for artists who publish potty humor songs on its streaming service, there’s no way to know whether or not the theory is correct.

But given that kids love yelling about poop and that these artists have made money from their poop-themed songs for kids, it’s not a far stretch.

Read This Next
New Frontiers
Mind-Melting AI Makes Frank Sinatra Sing "Toxic" by Britney Spears
Fear Factor
Amazon Claims Rekognition Can Now Detect Fear
Sexist AIs
United Nations: Siri and Alexa Are Encouraging Misogyny
Radical Misuse
Police Are Using Facial Recognition Tech on Unconscious Suspects
AI Boss
Amazon Used An AI to Automatically Fire Low-Productivity Workers
More on Artificial Intelligence
AI Asshole
Yesterday on the byte
BuzzFeed Columnist Tells CEO to "Get F*cked" for Move to AI Content
Deepfaked Neighbors
Yesterday on futurism
Trashy TV Prank Show Deepfakes Celebrities Into Jackass-Style Situations
Bad Bots
Yesterday on the byte
Oxford Scientists Warn AI Could Be More Deadly Than Nuclear Weapons
READ MORE STORIES ABOUT / Artificial Intelligence
Keep up.
Subscribe to our daily newsletter to keep in touch with the subjects shaping our future.
+Social+Newsletter
TopicsAbout UsContact Us
Copyright ©, Camden Media Inc All Rights Reserved. See our User Agreement, Privacy Policy and Data Use Policy. The material on this site may not be reproduced, distributed, transmitted, cached or otherwise used, except with prior written permission of Futurism. Articles may contain affiliate links which enable us to share in the revenue of any purchases made.
Fonts by Typekit and Monotype.