In poor visibility, your car could look for landmarks — under the surface of the road. 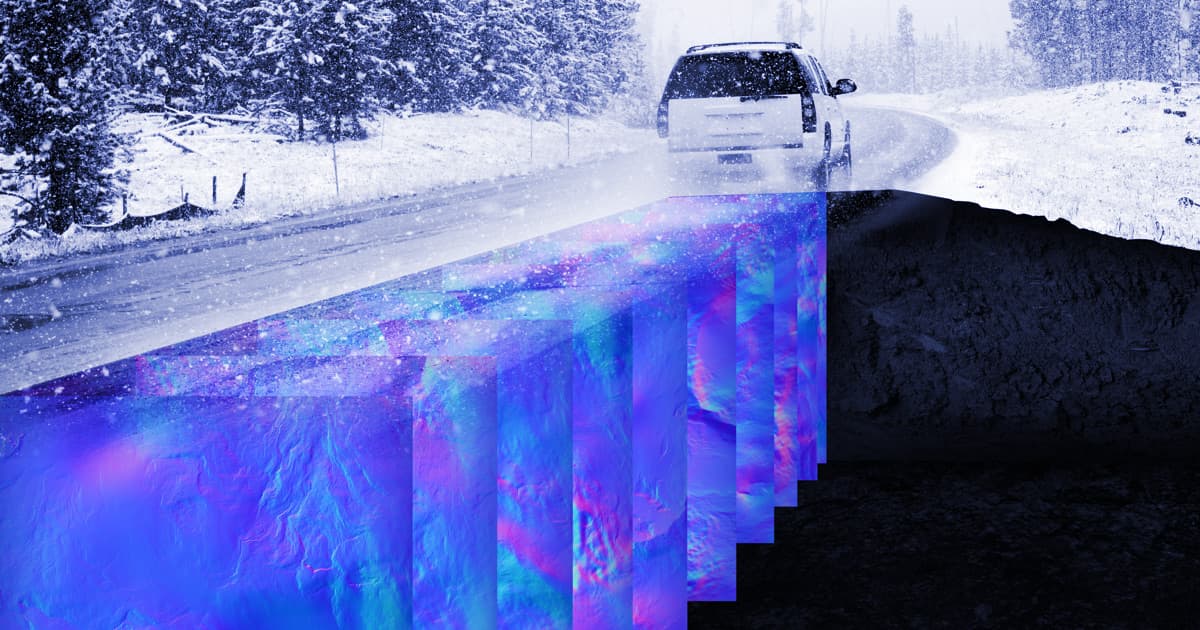 MIT is working on self-driving technology that allows cars to "see" through the ground up to a depth of ten feet below the surface of the road. The idea is to allow self-driving cars to figure out exactly where they are — especially when snow, heavy fog, or other bad weather obscures road markings.

Current-generation self-driving cars typically rely on cameras and light detection sensors (LIDAR) to position themselves on roadways. But once the snow starts falling and covers up lane markers, it can get tricky for the car to tell where it is — and that could spell disaster, especially at highway speeds.

A team at MIT's Computer Science and Artificial Intelligence Lab have come up with a new system they call "Localizing Ground Penetrating Radar"  (LGPR) that can create a real-time map of the ground below the road's surface.

"If you or I grabbed a shovel and dug it into the ground, all we're going to see is a bunch of dirt," says CSAIL PhD student Teddy Ort told Engadget. "But LGPR can quantify the specific elements there and compare that to the map it's already created, so that it knows exactly where it is, without needing cameras or lasers."

In a video released today, the team of researchers show off the tech working on a private road that's covered in snow.

The tech even works inside a parking garage, thanks to the arrangement of concrete and metal reinforcements below that create a unique imprint, as ExtremeTech reports.

The team is now working on miniaturizing their invented system as it is six feet wide right now — way larger than a current generation suite of cameras and LIDAR sensors.

Read This Next
Steering Wheels Coming Off
Automotive Lobbying Group Abandons the Term "Self-Driving"
Driving Himself Crazy
Watch Elon Musk Promise Self-Driving Cars "Next Year" Every Year Since 2014
Look Ma
It's Shockingly Easy to Drive a Tesla Without Anybody in the Driver's Seat
Shots Fired
Ford CEO Mocks Tesla For Rolling Out Half-Finished Autonomous Driving
Trolley Problem Enhanced
Tesla Bros Are Freaking Out Right Now About the New Full Self-Driving Beta
More on Advanced Transport
Wrong Turn
Jul 2 on the byte
Terrifying Video Shows Self-Driving Tesla Head Into Oncoming Traffic
Where's Musko
Jul 1 on futurism
7 Theories About Why Elon Musk Has Disappeared
Robotaxi to Nowhere
Jul 1 on the byte
Group of Robotaxis All Shut Down at Same Moment, Stopping Traffic for Hours
READ MORE STORIES ABOUT / Advanced Transport
Keep up.
Subscribe to our daily newsletter to keep in touch with the subjects shaping our future.
+Social+Newsletter
TopicsAbout UsContact Us
Copyright ©, Camden Media Inc All Rights Reserved. See our User Agreement, Privacy Policy and Data Use Policy. The material on this site may not be reproduced, distributed, transmitted, cached or otherwise used, except with prior written permission of Futurism. Fonts by Typekit and Monotype.