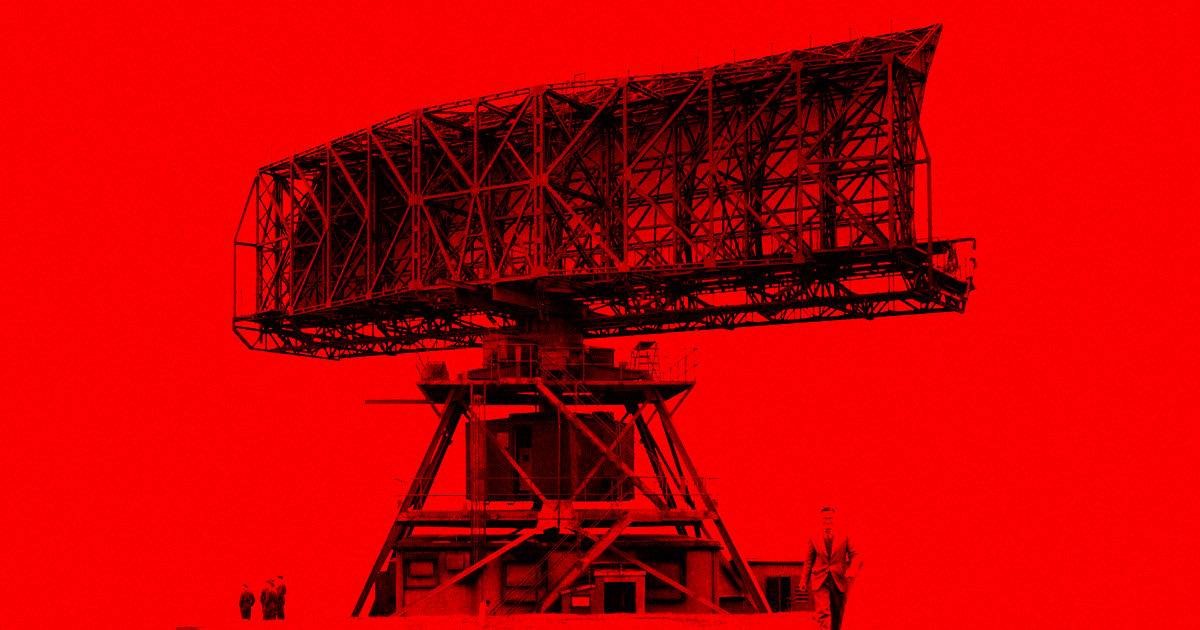 Millionaires are just like the rest of us — when they need help repairing their out-of-commission, Cold War-era radar units to detect UFOs, they turn to the good folks over at Reddit.

As spotted by Vice, an anonymous Reddit post featuring a gigantic British AMES Type 84 radar unit led users on a quest to unmask the mysterious person who'd bought it — and their equally-out-there reason for doing so.

"Help!" the user wrote on their anonymous Reddit post, featuring a photo of the Cold War behemoth. "I want to bring this back to life."

Later, when someone asked the original poster what they wanted to do with the giant hunk of junk, the user replied, "because I convinced myself it may be good fun to use to attempt to find UFOs?"

Redditors pretty quickly figured out who was behind the post, since there are only five Type 84 radar units like it in Britain: none other than entrepreneur and roboticist William Sachiti.

Sachiti, who has already made a name for himself in the UK for having founded autonomous delivery startup Kar-go, later confirmed to Vice that he was indeed behind the post.

Sachiti told the publication that he was only kind of joking when he said he wanted to use the machine — which was previously used by the British Air Force to detect enemy crafts and weapons — to hunt for aliens.

"It’s not for me to decide what the best use in the modern world is for it," he said. "So long as it doesn’t harm and it’s not intrusive… I've got the tech… let’s give it a life."

The main reason Sachiti is refurbishing the Type 84, however, is much more mundane.

He told Vice that when he purchased a decommissioned Royal Air Force base for his company Kar-go earlier this year, the property came with the abandoned radar unit.

Because the Type 84 is considered a historic monument by the British government, it couldn't be demolished, so it sat unused for decades — until Sachiti decided to do something with it.

"Because there was nobody here for a while," Sachiti told Vice, "it was slowly beginning to degrade. And to me, every time I've looked at it, I just thought, 'something's got to be done.'"

So he took to Reddit to try to crowdsource a fix for the decaying behemoth, and the rest, as they say, is history.

Because it's only been a week since his initial post, the Type 84 isn't back up and running just yet. It will likely need a lot of tinkering to make sure that it doesn't wipe out local television waves, as Sachiti explained to Vice, thanks to the staggering amount of ionized radiation it produces while operating.

But given the level of expertise Sachiti's post has already attracted, it's probably only a matter of time until it starts scanning the skies for visitors from other worlds.

More on UFOs: Astronaut Speculates That UFOs Are Time Travelers From the Future

Read This Next
Out There
Former Pentagon Officials Say Family of UFO Investigator Reported Creature Peering into Their House
Futurism
Former Official: UFO Report Actually Strengthens "Alien Hypothesis"
Alyums?
US Officials Say Gov Can't Rule Out Aliens Behind UFO Sightings
Obama
Barack Obama: "When It Comes to Aliens, There Are Things I Just Can’t Tell You on Air"
Look at That Thing
Navy Pilot Describes Bizzare "Tic Tac" UFO Encounter He Filmed
More on Future Society
Hearing Help
Yesterday on the byte
Hearing Aids Will Be Available Over-The-Counter Starting This Fall, FDA Says
Democracy Shmemoc...
Yesterday on the byte
Free Speech Warrior Elon Musk Writes Column For Chinese State Censor's Magazine
Under the Sea
Aug 13 on the byte
Harvard Professor Trying to Recover Alleged Alien Tech From Ocean
READ MORE STORIES ABOUT / Future Society
Keep up.
Subscribe to our daily newsletter to keep in touch with the subjects shaping our future.
+Social+Newsletter
TopicsAbout UsContact Us
Copyright ©, Camden Media Inc All Rights Reserved. See our User Agreement, Privacy Policy and Data Use Policy. The material on this site may not be reproduced, distributed, transmitted, cached or otherwise used, except with prior written permission of Futurism. Fonts by Typekit and Monotype.