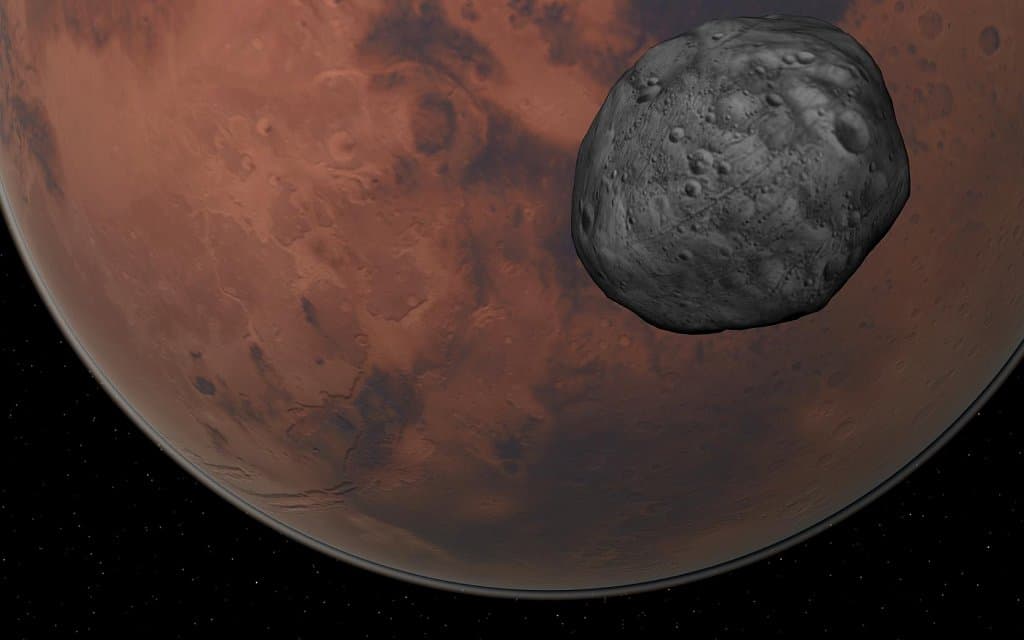 The Death of Phobos

About 6,000 km (3,700 miles) above the Martian surface there's Phobos, one of Mars' two natural satellites. It orbits its parent planet like any other moon, except that it does so from a shorter distance than any other (known) moon in our solar system. If one could stand on the surface of the Red Planet and look up into the night sky, Phobos would zoom across the sky in just under 4 hours and 15 minutes.

For some time we've know that Phobos, which is also Mars’ largest moon, is slowly falling towards its planet. Now, scientists have determined that, eventually (around 20 to 40 million years from now) Mars’ gravitational pull will shred Phobos to pieces, which will then come to form a ring around the Red Planet.

UC Berkeley postdoctoral fellow Benjamin Black and graduate student Tushar Mittal came to this conclusion after examining the moon’s cohesiveness. They’ve deduced that, as Phobos gets closer to the planet, the variations in gravitational tugs being exerted by Mars will be enough to tear the moon apart due to Phobos being made mostly of rubble and porous rock. The broken pieces will then begin orbiting around the planet as a new ring, though some of the larger fragments will probably fall onto the planet’s surface and form impact craters.

According to Black, since Phobos was moving towards Mars at a rate of a few centimetres a year, it is inevitable that, one day, it would either crash into the planet or break apart. In fact, it is suspected that the rings surrounding the outer planets (such as Saturn) were once moons, which have long disintegrated.

To estimate Phobos’ strength, they took data from rocks and meteorites that were similar in composition and appearance to that moon.  They then theorized roughly when the moon would shatter, and how the resulting debris would eventually be captured by Mars to form a ring. They also hypothesized that this ring would persist for about 100 million years.

Read This Next
A Sip of Opal
NASA Discovers Precious Gemstones on Mars
Moon Wrestling
The Head of NASA Is Scared Chinese Astronauts Will Seize Portions of the Moon
Martian Oases
Scientist Proposes Growing a Forest Inside a Bubble on Mars
Big Impact
Meteorite Hit Mars So Hard NASA Thought It Was a Quake
Palliative Care
NASA's Mars Lander Refuses to Die Even Though It's Supposed To
More on Off World
Lonely Planet
4:20 PM on futurism
Scientists Find Nearby Planet the Same Size of Earth, Plan to Search It for Life
Take Cover
Yesterday on the byte
Space Startup Blows Up Another Giant Inflatable Space Station Module
Rock Blast
Yesterday on the byte
Scientists Say There's an Upside to Those Rocks That Keep Bludgeoning the James Webb
READ MORE STORIES ABOUT / Off World
Keep up.
Subscribe to our daily newsletter to keep in touch with the subjects shaping our future.
+Social+Newsletter
TopicsAbout UsContact Us
Copyright ©, Camden Media Inc All Rights Reserved. See our User Agreement, Privacy Policy and Data Use Policy. The material on this site may not be reproduced, distributed, transmitted, cached or otherwise used, except with prior written permission of Futurism. Articles may contain affiliate links which enable us to share in the revenue of any purchases made.
Fonts by Typekit and Monotype.