Everything You Need to Know From Mark Zuckerberg’s Congressional Testimony: Day 1 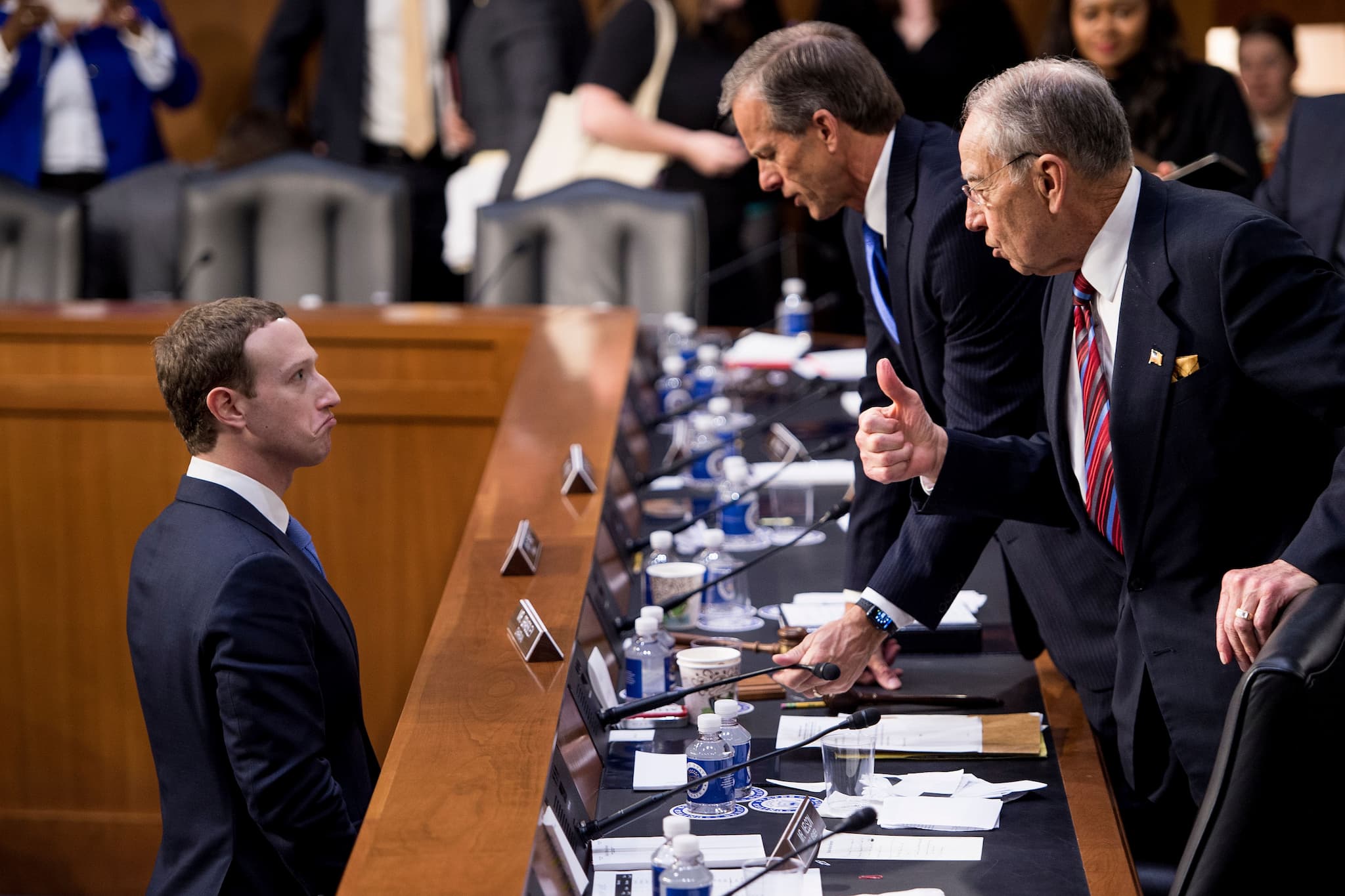 You've heard the rumblings over the years: Might Mark Zuckerberg make it to Washington? We're pretty sure this isn't the type of visit he had in mind. In the wake of Facebook's involvement in the data-sharing scandal, Zuckerberg testified today before a joint session of the Senate Judiciary Committee and the Senate Commerce, Science, and Transportation Committee (at 10:00 ET tomorrow morning, he'll be in the hot seat again, this time before the House Committee on Energy and Commerce).

Zuckerberg already shared his written testimony, but during today's live-streamed hearing, 44 Senators had five minutes each to ask him questions directly. The whole thing took about five hours. Here are the topics they batted around the most, and what both the Senators and Facebook's CEO had to say about them.

"If you and other social media companies don't get your act in order, none of us are going to have any privacy any more," Sen. Bill Nelson (D-FL) said during his opening statement. Given the nature of the Cambridge Analytica scandal (reminder: the third-party app used a quiz to get ahold of user data, as well as that of all of their friends), it's not surprising that privacy was a hot topic throughout the hearing.

Lawmakers tried to suss out exactly what Facebook knew about the Cambridge Analytical scandal, most of which was already covered in Zuckerberg's previous statements on the topic. They also asked if he'd react differently if the data scraping happened today (yes, he would).

At several points throughout the testimony, Zuckerberg attempted to clarify exactly what data Facebook collects and what it doesn't. He frequently emphasized that Facebook does not sell user data. It collects data, and then gives advertisers access to the Facebook users that are most relevant for their products or services.

In one of the most overtly critical moments of the day, Sen. Maria Cantwell (D-WA) questioned outright whether Zuckerberg had the "will" to help Congress solve the problem of inadequate privacy protections.

Zuckerberg told Sen. John Cornyn (R-TX), "I agree that we're responsible for the content [on Facebook]," and a number of questions focused specifically on what kind of "content" actually showed up on the social media site.

Meanwhile, Sen. Ted Cruz (R-TX) took a different line of questioning (perhaps not surprising since, as several have pointed out, Cruz himself was working with Cambridge Analytica), noting that the platform seems to express a bias against conservative stories and users.

"I am very committed to making sure Facebook is a platform for all ideas," Zuckerberg responded. Facebook attempts to police content that can cause "real-world harm," such as terrorism, self-harm, or election interference, according to Zuckerberg.

Beyond that, though, the platform's goal is "to allow people to have as much expression as possible."

Sen. John Thune (R-SD) noted in his opening remarks that lawmakers may soon need to take more control in the tech industry instead of letting the companies mostly regulate themselves.

When Sen. Lindsey Graham (R-SC) asked Zuckerberg if Facebook would "welcome regulation," Zuckerberg said, "I think, if it's the right regulation, then yes."

As for what those that regulation might be, Zuckerberg told Graham he would "absolutely" work with lawmakers on crafting it, and that his team would follow up after (this, perhaps, was Zuckerberg's most-often repeated phrase of the afternoon).

He later told Sen. Amy Klobuchar (D-MN) that a rule requiring Facebook to notify users of a breach within 72 hours "makes sense" to him. He also supports having a law that makes "opt in" the standard for data sharing.

The Best of the Rest

Here's a potpourri of things that might have come up less frequently, but were still significant during Zuckerberg's testimony:

Tune in tomorrow for Zuckerberg's round 2 in the ring with the U.S. Senate.

Read This Next
Confrontation is Hard
Former Facebook Exec Says Zuckerberg Has Surrounded Himself With Sycophants
Zesus
Interesting Theory: Mark Zuckerberg Is Trying to Become God and Build Heaven
Make Mark Happy
Facebook Employees Seem Completely Confused by the Metaverse
Midlife Crisis
Rumors Swirl That Mark Zuckerberg Is Fighting at a UFC Show
Mark's Bad Year
Layoffs Hitting Facebook as Zuckerberg's Vision Stumbles
More on Future Society
Rough
Monday on futurism
Elon Musk's Twitter Is Reportedly Failing Miserably to Contain Horrific Child Abuse Content
YouTube Propaganda
Monday on the byte
Experts Say There's Something Very Weird About North Korean YouTubers
Bird Crap
Feb 4 on the byte
It Looks Like Elon Musk Is Actually Building a Twitter Payment Platform
READ MORE STORIES ABOUT / Future Society
Keep up.
Subscribe to our daily newsletter to keep in touch with the subjects shaping our future.
+Social+Newsletter
TopicsAbout UsContact Us
Copyright ©, Camden Media Inc All Rights Reserved. See our User Agreement, Privacy Policy and Data Use Policy. The material on this site may not be reproduced, distributed, transmitted, cached or otherwise used, except with prior written permission of Futurism. Articles may contain affiliate links which enable us to share in the revenue of any purchases made.
Fonts by Typekit and Monotype.