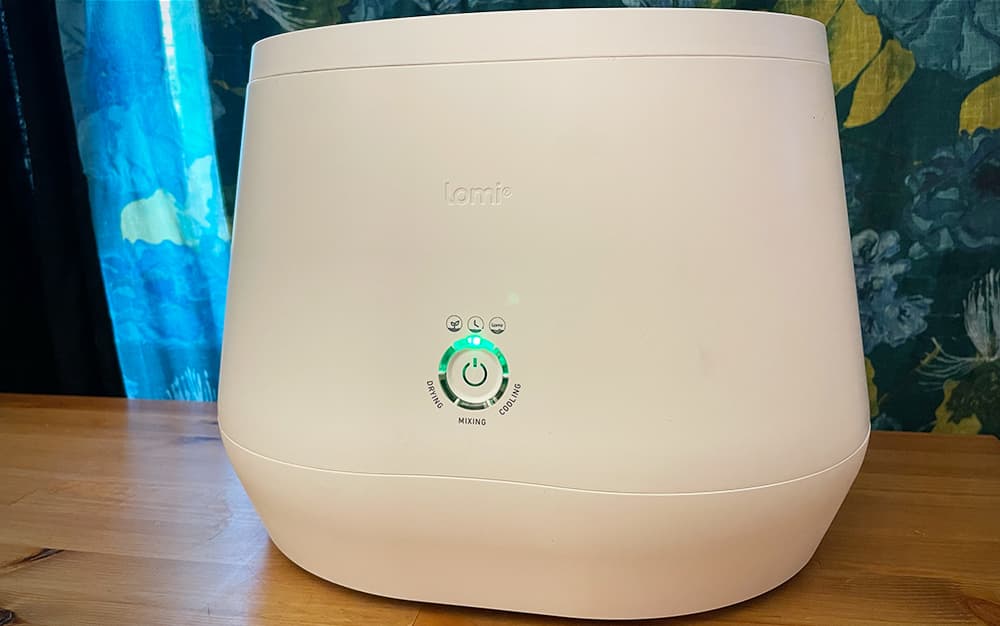 Apple cores, wilted cabbage leaves, spent espresso pucks, and that zucchini you bought and forgot about in your crisper drawer: these are just a handful of things that folks throw out every day, which eventually end up in landfills where they continue to rot. Composting is one of the ways to help flatten the food-waste curve, but nature’s a little slow when it comes to decay. Lomi is a composter that can live in your kitchen and turns scraps into nutrient-rich dirt. Here’s a quick review of its features.

Developed by eco-friendly brand Pela Earth, The Lomi composter is made to get people in the spirit of sustainability by making composting as common a chore as taking out the trash. Composting is typically done outdoors in large bins near gardens, where the compost can go to feed hungry plants. Occasionally, worms are added to the mix to help turn food scraps into dirt over long periods of time. Lomi, on the other hand, lives on any kitchen countertop and is easy to fill and operate on a daily basis. There are no bugs involved here, but the device works much in the same way worms break up organic matter and turn it into soil. Lomi is far quicker than our invertebrate friends, using heat, abrasion, and oxygen to tear down food scraps and turn them into healthy, nutritious dirt for your indoor or outdoor garden. Here are some of Lomi’s capabilities:

Cut Food Waste Footprint By Up to 50 Percent: Lomi breaks down common food scraps, like vegetables, fruit, and even small animal bones, but that’s just the beginning of the composting possibilities. Using its exclusive “Lomi Approved” mode, it can even break down bioplastics, which are made from organic, biodegradable materials instead of petroleum, and include everything from takeout forks to phone cases. Cut down on your energy usage further with the best solar panels.

The Miracle of Decomposition, Without the Smell: Decay is a smelly business. There are two activated-charcoal filters inside the Lomi, which will keep the smell of rot away from your kitchen, even as Lomi performs its magic.

Three Waste-Reduction Modes to Choose From: There are three different modes to turn refuse into dirt, depending on how much time and energy you want to invest. Lomi Approved turns bioplastics into dirt in as little as five hours. The default Eco-Express saves electricity and gets results in as little as four hours. For those cultivating green thumbs, the slow and steady 24-hour Grow mode uses less heat to preserve microorganisms that will make seriously carbon-rich soil.

Knowing Lomi’s capabilities still left me stunned. After running it for a simple four-hour cycle, I still have a hard time grasping how fuzzy tomatoes and festering lemons could so quickly and easily become garden soil. I’d be lying if clutching this dirt didn’t make me feel like an alchemist. A day’s worth of scraps from a two-person family barely filled the device halfway. You don’t have to fill it to its two-liter (about half a gallon) capacity to operate it either.

Cutting down on your carbon footprint almost always requires a little bit of effort, but Lomi’s broken down reclamation down to a few simple steps. There’s no complicated interface here, just one button, a dishwasher-safe bucket, and a sleek white enclosure complete with an attractive matte finish. Smaller kitchens may struggle with the countertop real-estate, considering it’s a hulking 16 inches long by 13 inches wide by 12 inches tall. After witnessing its power, the Lomi composter may replace your KitchenAid mixer as your favorite countertop appliance.