Fashion 2.0: Levi's "Distressed Look" Robot Is Better for the Environment

But will it leave global garment workers jobless? 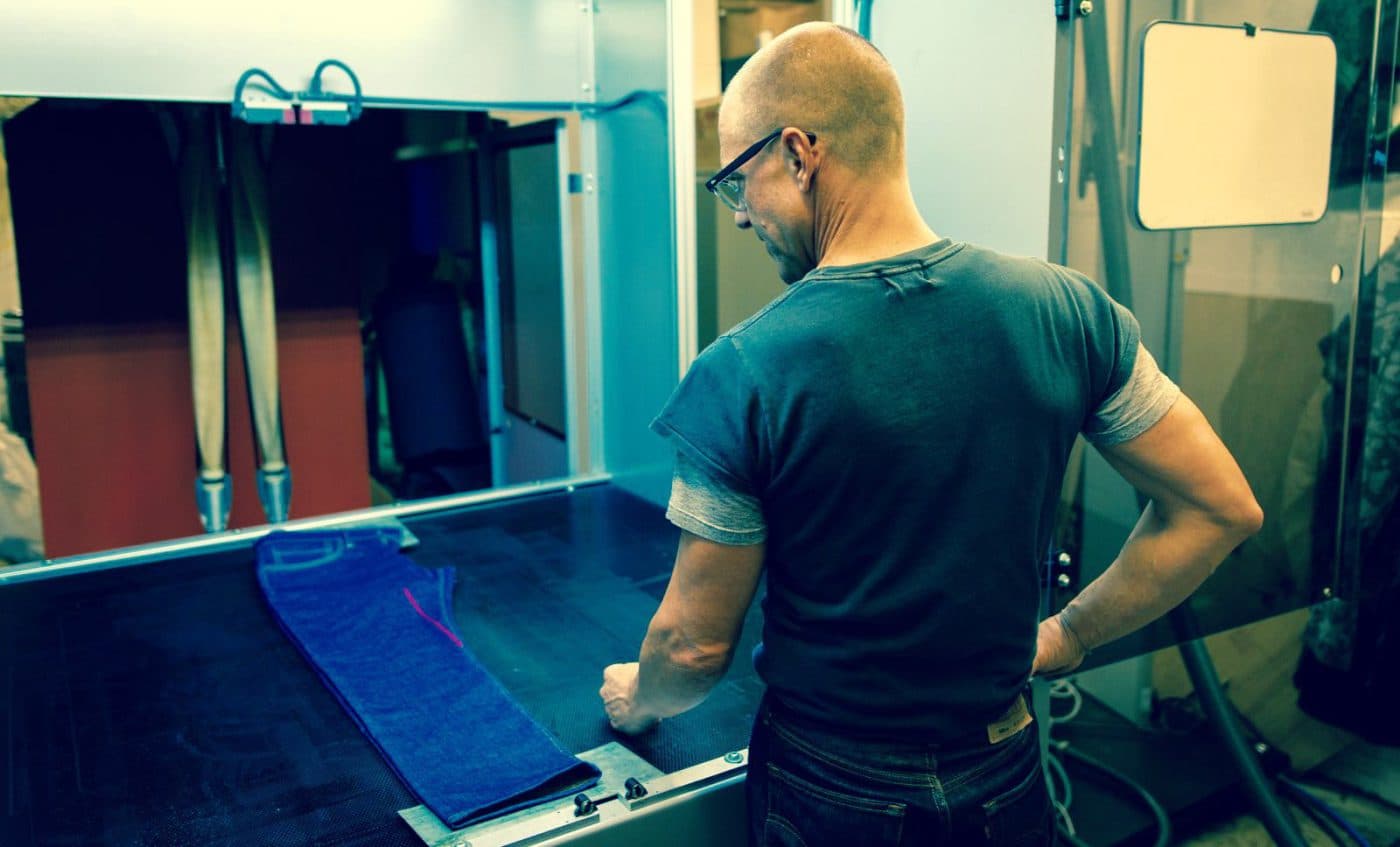 From faded fabrics to shredded knees, the "distressed look" is all the rage in the world of denim jeans. Now, the clothing company Levi's has found a way to keep up with that latest fashion demand while saving time and the environment. Their secret? A laser-equipped robot.

In 2013, Levi's established their Eureka Lab, a research and development center that combined technology and fashion. This innovation lab's latest breakthrough is Project F.L.X. (short for future-led execution) — a new way of styling jeans that utilizes software and lasers instead of sandpaper and chemicals.

Project F.L.X. could transform the jean finishing process, or when the pants get given their signature distressed look, from the prototype stage all the way to mass production.

Levi's designers use new software to sketch out a specific look for a pair of jeans. Then, they send that design file to the robot, which uses lasers to recreate the look on a basic pair of jeans. Instead of each prototype requiring between 12 and 18 steps, the process is now just three.

According to Levi's, this cuts the time needed to develop and finish a design in half, which can help the company stay on top of the latest trends.

Project F.L.X. also streamlines the process of replicating the look of a pair of genuinely vintage jeans. A designer simply takes a photograph of the jeans, illustrates it, and send it to the robot. Wherever there's a hole or a rip in the illustration, the laser puts a hole or a rip in the jeans. The robot completes in 90 seconds what would take a human worker eight to 12 minutes.

Once a designer decides on a look, Levi's can use the digital file to accurately mass produce it in their factories across the globe.

Levi's has vowed to completely eliminate the discharge of any hazardous chemicals into the environment. This new finishing system has the potential to go a long way toward helping them reach that goal, especially if the system is widely implemented — which Levi's states it plans to do.

“We’re all in, we’re going for it,” Liz O’Neill, Levi’s supply chain officer, told Fast Company. “Our intention is that for 2019 and beyond, we’re going to have scaled this technology. We’re going to be making upwards of 75 million pairs of denim like this.”

Unlike some artificially intelligent clothing-making machines, the garments that Levi's new system produces are still designed by humans. However, while designers aren't pushed out of the manufacturing process by Project F.L.X., other workers could be.

By saving the company time, Levi's Project F.L.X. presumably saves it money as well, or at least it will after the company recoups upfront costs. This, combined with the environmental benefits, could be enough to encourage other jean manufacturers to follow suit with their own laser-wielding robots.

The garment industry is notorious for its inhospitable working conditions, and in jean manufacturing factories across the globe, workers risk exposure to cancer-causing chemical dyes while inhaling the fine particles of sand typically used to distress jeans.

If the companies that follow Levi's lead retrain their workers to perform other, less dangerous jobs, everyone will benefit from the new system.

However, if Project F.L.X. results in those already vulnerable workers moving from low-paying, dangerous jobs to no jobs at all, the laser-robot technology could prove to be less of an environmentally-friendly way to manufacture jeans, and more like another threat to the global human workforce.

Read This Next
From the Dept. of Buying Things
Byte-Sized Review: Dyson V12 Detect Slim Is Powered With Freaking Lasers
Futurism
The U.S. Is Turning to Lasers for the Future of Warfare
Futurism
Boeing Is Developing Laser Pods for U.S. Fighter Jets
Futurism
Next-Generation Warfare Will Feature Laser-Mounted Combat Vehicles
Futurism
Proof That the Clothing of the Future Will Likely Come From a Printer
More on Robots & Machines
From the Dept. of...
Yesterday on futurism
The Best Exercise Bikes of 2023
It's Nothing Pers...
Thursday on the byte
Scientists Create Shape-Shifting Robot That Can Melt Through Prison Bars
From the Dept. of...
Thursday on futurism
The Best Smart Lights of 2023
READ MORE STORIES ABOUT / Robots & Machines
Keep up.
Subscribe to our daily newsletter to keep in touch with the subjects shaping our future.
+Social+Newsletter
TopicsAbout UsContact Us
Copyright ©, Camden Media Inc All Rights Reserved. See our User Agreement, Privacy Policy and Data Use Policy. The material on this site may not be reproduced, distributed, transmitted, cached or otherwise used, except with prior written permission of Futurism. Articles may contain affiliate links which enable us to share in the revenue of any purchases made.
Fonts by Typekit and Monotype.