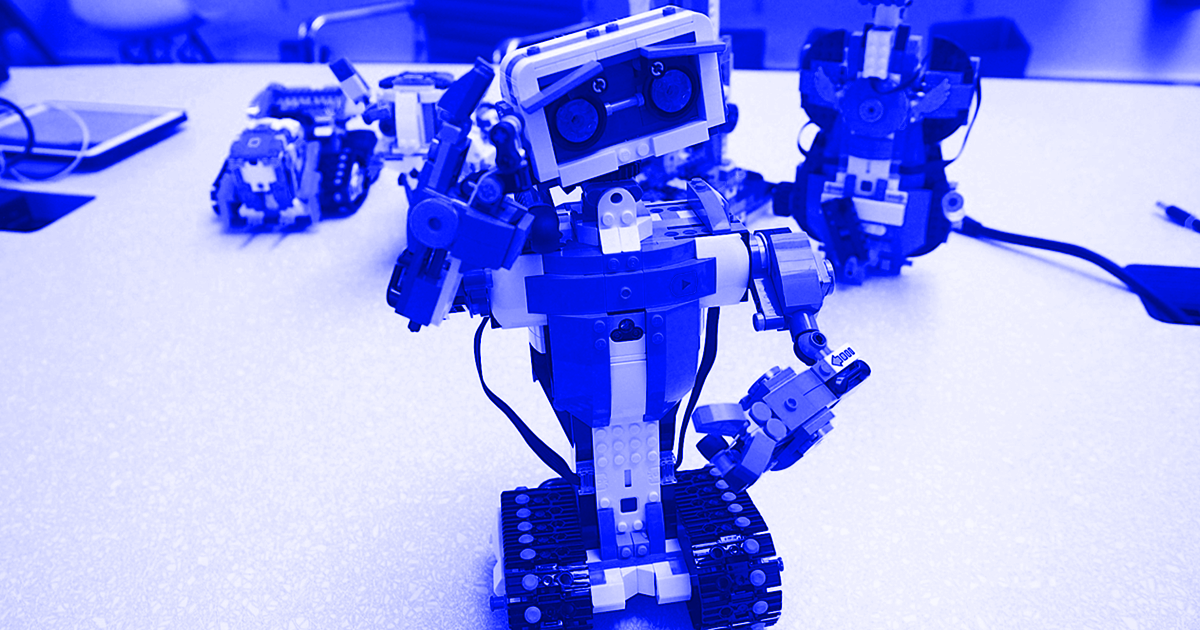 Do you like robots? Don’t bother answering that, everyone likes robots. And if you’re ready to take that love to the next level by building a robot yourself, LEGO has a way for you to build not one, not two, but five specially designed, functional robots with one set of LEGO building bricks. It’s the LEGO Boost Creative Toolbox (17101).

The LEGO Boost Creative Toolbox (17101) is 847 pieces that combine into any of five different multi-functional robotic friends, each of which is listed below:

“A robot that dances, cracks jokes and passes gas,” Vernie would appear to be the comedy relief wildcard of the group, complete with Groucho-esque eyebrows, which hopefully have their own waggle function.

Described as “interactive pet that plays, purrs and expresses its mood,” Frankie is a throwback to the golden age of electronic pets, and this one you can technically pet in real life. And unlike a real pet, you don’t have to remember to feed it -- except batteries, of course.

One of the first lessons you learn when you study robotics is that not all robots are anthropomorphic mechanical friends. The M.T.R. 4 is a “robust, versatile rover with four different tool attachments including a spring-loaded shooter,” which the NASA rovers don’t even have.

Guitar 4000 is, as its name suggests, a “musical instrument learning toy with pitch bend and sound effects.” Basically, choosing to build it means being rewarded for your hard work with hours and hours of shredding.

Quite possibly the highlight of the entire LEGO Boost Creative Toolbox is the aptly named Auto Builder, purportedly a “automated production line that really builds miniature LEGO models” -- that’s right, it’s a LEGO model that builds other LEGO models, the dream of every child now made real.

You probably already realize that the LEGO Boost Creative Toolbox is automatic fun, but it’s a good educational tool as well that acts as an introduction to basic engineering concepts. And the free LEGO Boost app lets you code different behaviors for your robot friends and control them remotely, as well.

The LEGO Boost Creative Toolbox is recommended for kids aged 7 and up who are interested in learning the basics of robotics, engineering, coding, and other STEM-friendly concepts. The kit is designed to be intuitive and easy to learn, and its five different robot designs give it a longer shelf life than any typical modeling kit. And if you or your kids are hardcore LEGO fans, you might be interested to know the robots in this kit can be combined and used along with the LEGO City 60194 Arctic Scout Truck and the LEGO NINJAGO 70652 Stormbringer for even more complex robotic creations.

So if you have a kid in your life who wants to grow up to be a robot-building genius, grab the LEGO Boost Creative Toolbox (17101) right now.

Read This Next
FROM THE DEPT. OF THINGS TO BUY
The Best Lego Star Wars Sets of 2023
Diner Drama
People Furious at Robot Serving Pancakes at Denny's
Killer Robot Update
Uh Oh, They Strapped a Sniper Rifle to a Robot Dog
Brands We Love
Take Your LEGO Game to New Heights (Literally) With the Flybrix LEGO Drone Kit
Brick by Brick
This Engineer Published Scientific Papers Using a Lego Microscope
More on Robots & Machines
FROM THE DEPT. OF...
Yesterday on futurism
The Best Wired Earbuds in 2023
From the Dept. of...
Tuesday on futurism
The Best Wireless Mouse of 2023
Balloon Boy
Monday on the byte
Other Chinese Balloons Apparently Flew Over America, But Nobody Noticed Them
READ MORE STORIES ABOUT / Robots & Machines
Keep up.
Subscribe to our daily newsletter to keep in touch with the subjects shaping our future.
+Social+Newsletter
TopicsAbout UsContact Us
Copyright ©, Camden Media Inc All Rights Reserved. See our User Agreement, Privacy Policy and Data Use Policy. The material on this site may not be reproduced, distributed, transmitted, cached or otherwise used, except with prior written permission of Futurism. Articles may contain affiliate links which enable us to share in the revenue of any purchases made.
Fonts by Typekit and Monotype.