Jupiter’s powerful magnetic storms do not have the same source as they do on Earth. 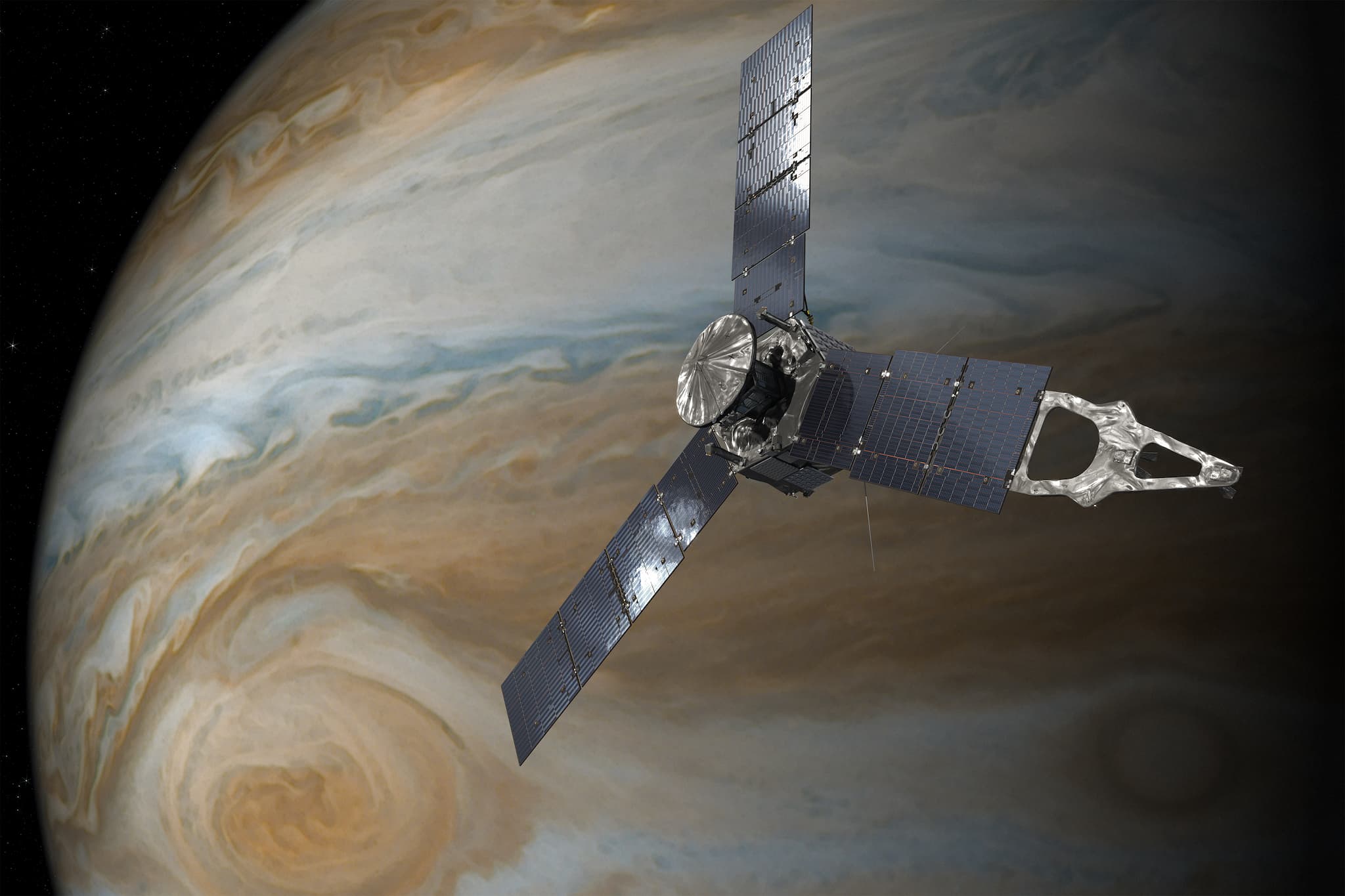 Studying this phenomena has been one of the main goals of the Juno probe, which reached Jupiter on July 5th, 2016. However, after analyzing data collected by the probe’s instruments, scientists at Johns Hopkins University Applied Physics Laboratory (JHUAPL) were surprised to find that Jupiter’s powerful magnetic storms do not have the same source as they do on Earth.

As with Earth, on Jupiter, auroras are the result of intense radiation and Jupiter’s magnetic field. When this magnetosphere aligns with charged particles, it has the effect of accelerating electrons towards the atmosphere at high energy levels. In the course of examining Juno’s data, the JHUAPL team observed signatures of electrons being accelerated toward the Jovian atmosphere at energy levels of up to 400,000 electron volts.

This is roughly 10 to 30 times higher than what is experienced here on Earth, where only several thousand volts are typically needed to generate the most intense aurora. Given that Jupiter has the most powerful auroras in the Solar System, the team was not surprised to see such powerful forces at work within the planet’s atmosphere. What was surprising, however, was that this was not the source of the most intense auroras.

As Dr. Mauk, who leads the investigation team for the APL-built JEDI instrument and was the lead author on the study , explained in a JHUAPL press release:

“At Jupiter, the brightest auroras are caused by some kind of turbulent acceleration process that we do not understand very well. There are hints in our latest data indicating that as the power density of the auroral generation becomes stronger and stronger, the process becomes unstable and a new acceleration process takes over. But we’ll have to keep looking at the data.”

These findings could have significant implications for the study of Jupiter, who’s composition and atmospheric dynamics continue to be a source of mystery. It also has implications or the study of extra-solar gas giants and planetary systems. In recent decades, the study of these systems has revealed hundreds of gas giants that have ranged in size from being Neptune-like to many times the size of Jupiter (aka. “Super-Jupiters”).

These gas giants have also shown significant variations in orbit, ranging from being very close to their respective suns to very far (i.e. “Hot Jupiters” to “Cold Gas Giants”). By studying Jupiter’s ability to accelerate charged particles, astronomers will be able to make more educated guesses about space weather, radiation environments, and the risks they pose to space missions.

This will come in handy when it comes time to mount future missions to Jupiter, as well as deep-space and maybe even interstellar space. As Mauk explained:

“The highest energies that we are observing within Jupiter’s auroral regions are formidable. These energetic particles that create the auroras are part of the story in understanding Jupiter’s radiation belts, which pose such a challenge to Juno and to upcoming spacecraft missions to Jupiter under development. Engineering around the debilitating effects of radiation has always been a challenge to spacecraft engineers for missions at Earth and elsewhere in the solar system. What we learn here, and from spacecraft like NASA’s Van Allen Probes and MMS that are exploring Earth’s magnetosphere, will teach us a lot about space weather and protecting spacecraft and astronauts in harsh space environments. Comparing the processes at Jupiter and Earth is incredibly valuable in testing our ideas of how planetary physics works.”

Before the Juno mission is scheduled to wrap up (in February of 2018), the probe is likely to reveal a great many things about the planet’s composition, gravity field, magnetic field and polar magnetosphere. In so doing, it will address long-standing mysteries about how the planet formed and evolved, which will also shed light on the history of the Solar System and extra-solar systems.

Read This Next
Hello Darkness
NASA Proposes Sending Spacecraft to Measure Mysterious Dark Matter
Jupiter Jokesters
Nitwits Claim Wrongly to Have Disproved the Existence of Jupiter
Ganymede Closeup
NASA Spacecraft Takes Gorgeous Pictures of Jupiter’s Largest Moon
Fission Power
Russia Wants to Send a Nuclear-Powered "Space Tug" to Jupiter
Captain Planet
Planet Nine Might Not Actually Exist, Scientists Say
More on Off World
Killernova
Yesterday on the byte
Scientists Find "One in Ten Billion" Star System Primed to Explode in Titanic Kilonova
Lonely Planet
Feb 5 on futurism
Scientists Find Nearby Planet the Same Size of Earth, Plan to Search It for Life
Take Cover
Feb 4 on the byte
Space Startup Blows Up Another Giant Inflatable Space Station Module
READ MORE STORIES ABOUT / Off World
Keep up.
Subscribe to our daily newsletter to keep in touch with the subjects shaping our future.
+Social+Newsletter
TopicsAbout UsContact Us
Copyright ©, Camden Media Inc All Rights Reserved. See our User Agreement, Privacy Policy and Data Use Policy. The material on this site may not be reproduced, distributed, transmitted, cached or otherwise used, except with prior written permission of Futurism. Articles may contain affiliate links which enable us to share in the revenue of any purchases made.
Fonts by Typekit and Monotype.