Inside Dubai's Quest to be the First Blockchain-Powered City

From energy to media, almost every sector is exploring blockchain technology. 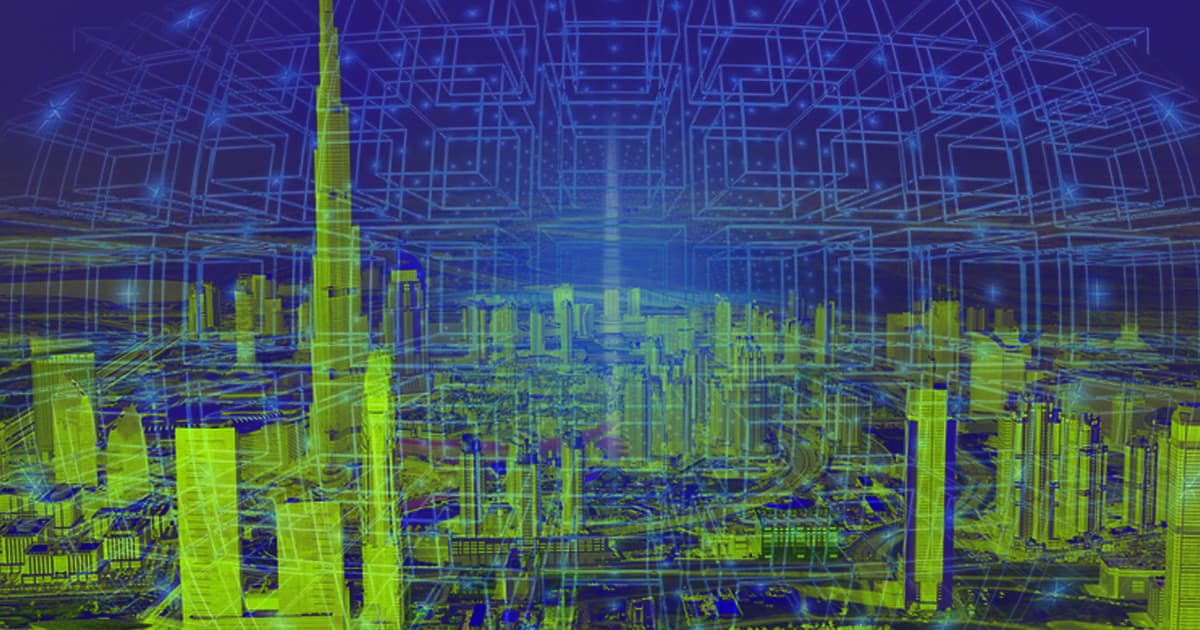 Disclaimer: This article was originally published on the Arabic version of the Futurism website, Mostaqbal. It has been edited for clarity and length. Futurism partners with, and receives funding from, the Dubai Future Foundation.

As a part of its digital transformation efforts, the United Arab Emirates (UAE) has capitalized on blockchain technology to transform government transactions on the federal level. Almost every sector of the UAE – from energy to media – is exploring blockchain and distributed ledger technology.

The Emirates Blockchain Strategy 2021 focuses on four main themes: happiness of citizens and residents, elevating government efficiency, advanced legislation, and international leadership. Together with the World Economic Forum, the UAE hopes to continue shaping the trajectory of blockchain deployment by using the best methods and minimizing the risks for the deployment of the technology.

Here's just some of what the UAE has learned from blockchain implementation over the last four years.

DP World – a world leader in global supply chain solutions that operates in 46 countries – specializes in cargo logistics, port terminal operations, maritime services and more. The shipping and logistics industry remains slow to change and is still heavily dependent on complex paperwork for managing goods and financial settlements. DP World has been actively exploring new solutions and technologies to address these challenges, including the ability to easily share data and automate processes through open APIs and smart contracts.

The company’s goals were the easing of the customer registration process, and the digitization and securing of trade documentation. The implementation of blockchain technology in the company’s workflow has yielded many benefits, including providing a single-window into all processes which have helped eliminate duplicate processes across organizations. It has also maintained close communications and fostered positive relationships with the engaged parties.

Emirates Airlines is the world’s largest international airline with a global network of 159 destinations in 85 countries across 6 continents. The company wanted to explore the potential of using blockchain to enhance its Skywards loyalty program by reducing the time and cost of on-boarding loyalty partners.

On the technical side, the goal was not to replace existing architecture, but to augment it. Partners would continue to use their existing software but connect via blockchain to leverage the benefit of a shared ledger for payment management. After demonstrating the value of the application, the decision was made to proceed with a full rollout of the solution in March 2019. Since moving to production, the project has yielded several positive results. It has led to greater transparency between Emirates Skywards and its partners, enhanced security, and a decrease in fraud.

Emirates NBD – a leading banking group in the Middle East, ranked as one of the largest by assets – set out to explore ways in which it could apply the technology to create real impact at scale. In 2016, it tested blockchain for cross-border transactions and trade finance documentation in partnership with ICICI Bank in India.

Afterwards, the Emirates NBD team decided to use blockchain to tackle the size-able challenge of cheque fraud. In the first month of launch alone in early 2017, Emirates NBD registered almost one million cheques on the blockchain. From January to November 2019, the network has verified over 35 million cheques. Furthermore, the bank has witnessed a 99% reduction in cheque fraud since the launch in March 2018. The concept then led the bank to create a digital financial instrument with a legal framework in place: the e-cheque.

Etisalat Digital, a business unit of Etisalat, is driving the digital revolution and transformation by enabling enterprises and governments to become smarter through the use of the latest technologies. The lack of digitization and mechanisms to validate data across different banks has led to a significant risk of fraud in transactions. Small to medium enterprises trade finance through invoice discounting is a growing business that requires controls to avoid risk to lenders of duplicated invoices. It is an increasing concern as multiple banks might end up financing the same invoice, and fraudulent invoices may appear along the process, due to the lack of communication between these banks.

To address this challenge of fraud where duplicate invoices have been financed, Etisalat Digital announced a new platform in June 2019, called UAE Trade Connect (UTC). UTC brought together eight major banks of the UAE. The founding members of the UTC network sought to apply blockchain as a verification layer to detect fraud in invoice financing through a shared blockchain network while maintaining the confidentiality of each bank’s client information. This has helped uncover an estimated 3.75 million fraudulent transactions in the UAE annually, representing $435 million USD in potential losses.

Abu Dhabi Digital Authority (ADDA) has been developing a government blockchain platform to enable and support a secure, trusted data-exchange mechanism between Abu Dhabi government entities and any other external organizations.

Throughout the project’s progression, the workflow is expected to become more streamlined between the government entities and enhance relationships between them. ADDA sees blockchain’s potential in improving government services, data-driven policies, and economic incentives, enabling a thriving data marketplace.

Ministry of Health and Prevention

As part of its objective to develop effective healthcare systems and continuously improve services, the Ministry of Health and Prevention identified organ donation allocation and transplants as a focus area while also aiming to prevent illegal organ trading in the UAE. As a result of this, Dhonor Healthtech was selected to develop UAE’s “Hayat” donor registry for recording individuals’ legal will as donors, using blockchain as a secure verification layer.

Since its initial launch in January 2019, thousands of registered donors have recorded their will on the Hayat blockchain-based application, and all hospitals permitted to conduct transplants have been participating in the national waiting list and allocation platform. The solution is expected to save the ministry over $20 million in estimated dialysis costs per year. In addition, it saves citizens the time and economic cost of driving to registry centers during working hours, by offering donor registration on the app or online.

In 2018, the system conducted more than 10.4 million transactions amounting to 16 billion dirhams ($4.3 billion USD). However, each entity has its own books and records, leading to significant time and cost in cases where the bookkeeping process was largely manual. One of the most significant challenges that sparked Smart Dubai’s interest in applying blockchain was the lengthy and costly manual reconciliation and settlement process, which took up to 45 days.

The Smart Dubai blockchain payment reconciliation and settlement project thus set out to create a more effective layer to address the limitations of the existing platform. As of November 2019, the majority of entities in the Dubai Pay platform have joined the blockchain platform. With the implementation of the platform, reconciliation has been cut from a 45-day process to real-time resolutions. Issues can be detected in real-time and, as a result, entities can provide more effective services or issue transaction refunds. Additionally, distributed financial records have helped the network improve the transparency and trust of the financial data between banks and entities.

The main challenges to blockchain deployment remain tied to operational and regulatory questions, as opposed to technical factors. Challenges have primarily revolved around identifying the right applications of blockchain, ensuring proper education and awareness for partners involved. For the UAE, resolving some of the main challenges wouldn’t have been possible without the government playing a big role in embracing emerging technologies and emphasizing the value of innovation for advancing society. As such, the Dubai Blockchain Strategy and Emirates Blockchain Strategy played a significant role in the creation of a collaborative environment and put in place processes for the private and public sectors to work together to explore blockchain at scale.