Realistic VR sex has reached a price point almost anyone can afford. 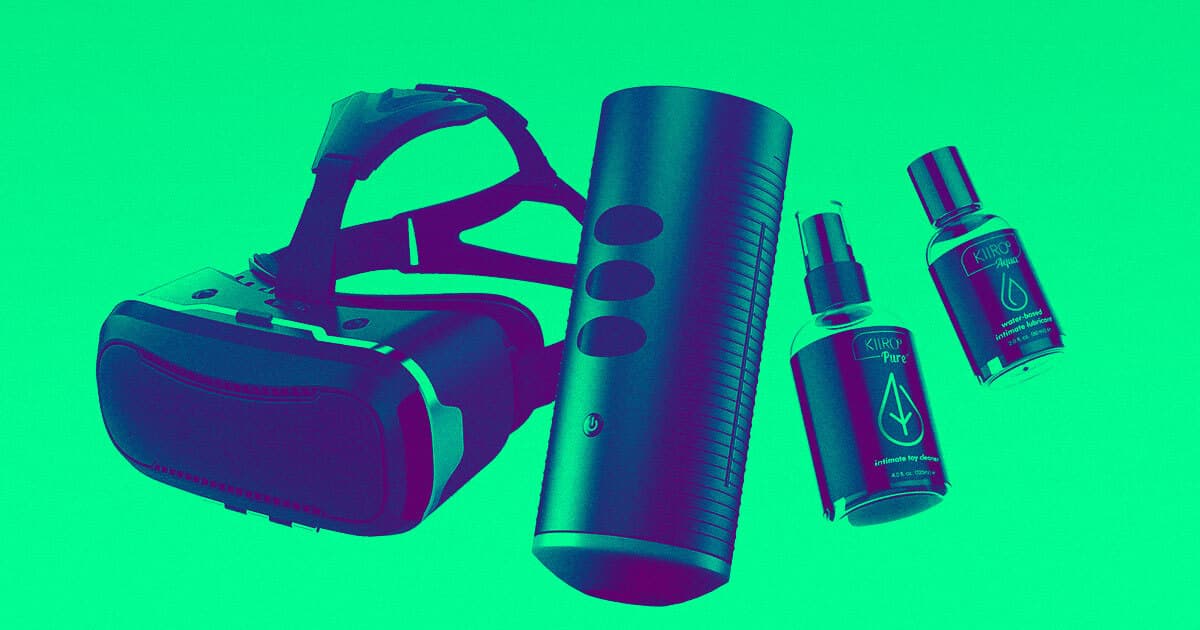 It has long been claimed that sex is the guiding force behind major technological developments or at least a major catalyst for taking new technologies mainstream. And with innovations such as home video, home computers, and the Internet, there's a case to be made for this argument. Now, if a company called KIIROO has its way, realistic, affordable VR sex will soon catapult virtual reality onto that list.

Titan by KIIROO is a virtual reality headset and vibrating stroker that boasts an unparalleled sexual experience. Not only can the device work in sync with adult videos that are viewed through the headset, but it can also be controlled by an actual human partner form anywhere in the world.

The Titan is equipped with touch-sensitive vibration technology built into nine bullet-shaped vibrators distributed across its special “real-feel” sleeve. The end result is an experience that has no parallel in the world of adult entertainment. It’s like something out of a special X-rated director’s cut of Ready Player One, and you’re "Player One."

The KIIROO Titan’s app is all about connectivity. As mentioned above, it can link up with another device, allowing the user to feel everything their partner does by way of synchronized vibrations that adjust for speed and intensity. That sort of connection (in both senses of the word) is a massive evolutionary leap forward in the field of VR sex. But it’s not the only way for you to experience the Titan’s incredible interactivity features.

There are currently thousands of VR videos out there with vibration patterns programmed to work in sync with the Titan, with more titles being added all the time. Without getting into graphic detail, it's safe to say that the implications of this technology will completely change the way people watch adult videos. In fact, “watch” isn't even an adequate word for what we're describing.

The Future of VR Sex Now Costs Less Than $200

This sort of technological advancement doesn't mean much to the average person if it's priced well beyond their means. But KIIROO is offering the Titan VR Experience, a package deal that gives you everything you need to enter the world of VR sex, for only $199. This includes the Titan itself, as well as a virtual reality headset that turns your phone into an instant VR rig. It also includes KIIROO Pure Premium Toy Cleaner and KIIROO Aqua Premium Water-Based Intimate Lubricant. It’s everything you need for realistic, interactive, virtual reality sex, all delivered discreetly to your door at no additional shipping cost.

As you might imagine, with so many people social distancing at present, the market for the KIIROO Titan is bigger than ever. So if you’re curious about VR sex, don't wait. Head over to the KIIROO online store and place your order now, and experience this amazing new technology for yourself.

Read This Next
To Meta Predator
Experts Warn of Child Predators in Mark Zuckerberg’s Metaverse
Defcon Fun
Princeton Researchers Create Terrifying VR Simulation of Nuke Attack to Train US Officials
Brands We Love
Realistic, Interactive VR Sex Is Finally Here, and It's Affordable
VR Gaming
Expert: VR Headsets Should Have Brain Interfaces
A Week in VR
This Guy Spent a Whole Week In a VR Headset
More on Virtuality
Who's This For?
Oct 11 on the byte
Meta's Uber-Expensive New VR Headset Is Dead on Arrival
We Met Online
Aug 21 on the byte
People Are Going on Dates in the Metaverse and It Sounds Very Strange
Spare Us
Aug 17 on the byte
Wave of Criticism Hits Zuckerberg's Metaverse for Looking Like Crap
READ MORE STORIES ABOUT / Virtuality
Keep up.
Subscribe to our daily newsletter to keep in touch with the subjects shaping our future.
+Social+Newsletter
TopicsAbout UsContact Us
Copyright ©, Camden Media Inc All Rights Reserved. See our User Agreement, Privacy Policy and Data Use Policy. The material on this site may not be reproduced, distributed, transmitted, cached or otherwise used, except with prior written permission of Futurism. Articles may contain affiliate links which enable us to share in the revenue of any purchases made.
Fonts by Typekit and Monotype.