India is Trying to Turn its Trash into Free WiFi 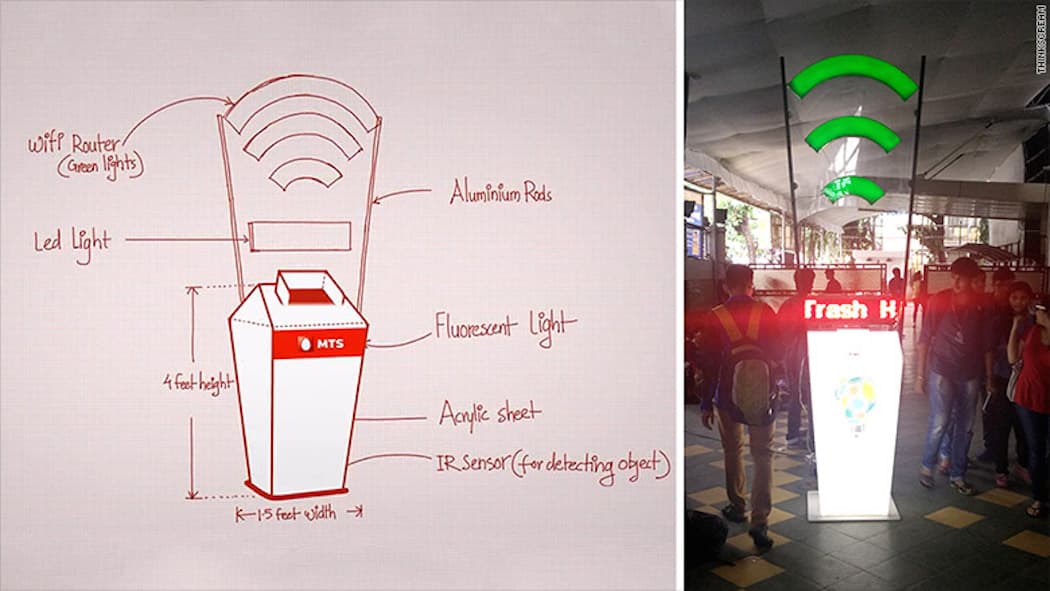 No littering—it’s a simple rule that always gets broken; but now, a pair of Mumbai entrepreneurs are seeing an opportunity to incentivize the simple act of respecting public spaces by throwing garbage in the trash can.

It started after Raj Desai and Pratik Agarwal, the cofounders of startup ThinkScream, attended a music festival in 2013. Here, they realized that it would be immensely helpful for people to stay connected during these events. Simultaneously, the two also saw the massive amount of trash that accumulates during festivals.

The two then began to develop a trash can that can give people 15 minutes of free WiFi simply by making sure that they throw their trash in the right place.

The smart garbage can is made of plastic, about 1.3 meters (4.5 feet) high, and comes with an LED screen. When someone throws something in the bin, the screen displays a unique code that will allow the user to access the internet within a 50 meter radius of the trash can. It costs about $1,470 to produce.

ThinkScream is also partnered with a local telecom company who managed to debut six smart garbage cans at a music festival back in 2014.

Novel as the idea is, the pair assures everyone that the intent behind the project was not to create a gimmick, but to actually spur civic action. “It was meant to be a catalyst for the public to change their behavior and stop littering," the pair told CNN.

Because the bins are fairly new, there hasn’t been enough data gathered to see how effective they are.

Currently, the smart garbage cans are available in a few colleges and some events for testing, but they are optimistic that government agencies and private companies are going to see widescale deployment. "

We haven't done a before-and-after analysis yet, but anecdotally we know that people do like to use the bin for the wow factor at first and then for the free WiFi," they said.

Read This Next
Futurism
India Is Launching the Largest Basic Income Experiment in History
More on Sci-Fi Visions
What is Happening
Feb 1 on the byte
Elon Musk Sets His Twitter Account to Private
From the Dept. of...
Jan 30 on futurism
The Best Humidifiers of 2023
Human v. Giraffe
Jan 24 on the byte
Chaotic Italian Fashion Line Baffles Facial Recognition Software
READ MORE STORIES ABOUT / Sci-Fi Visions
Keep up.
Subscribe to our daily newsletter to keep in touch with the subjects shaping our future.
+Social+Newsletter
TopicsAbout UsContact Us
Copyright ©, Camden Media Inc All Rights Reserved. See our User Agreement, Privacy Policy and Data Use Policy. The material on this site may not be reproduced, distributed, transmitted, cached or otherwise used, except with prior written permission of Futurism. Articles may contain affiliate links which enable us to share in the revenue of any purchases made.
Fonts by Typekit and Monotype.