Origami capsule made of meat can be ingested to remove objects swallowed accidentally, patch up wounds or deliver medicine. 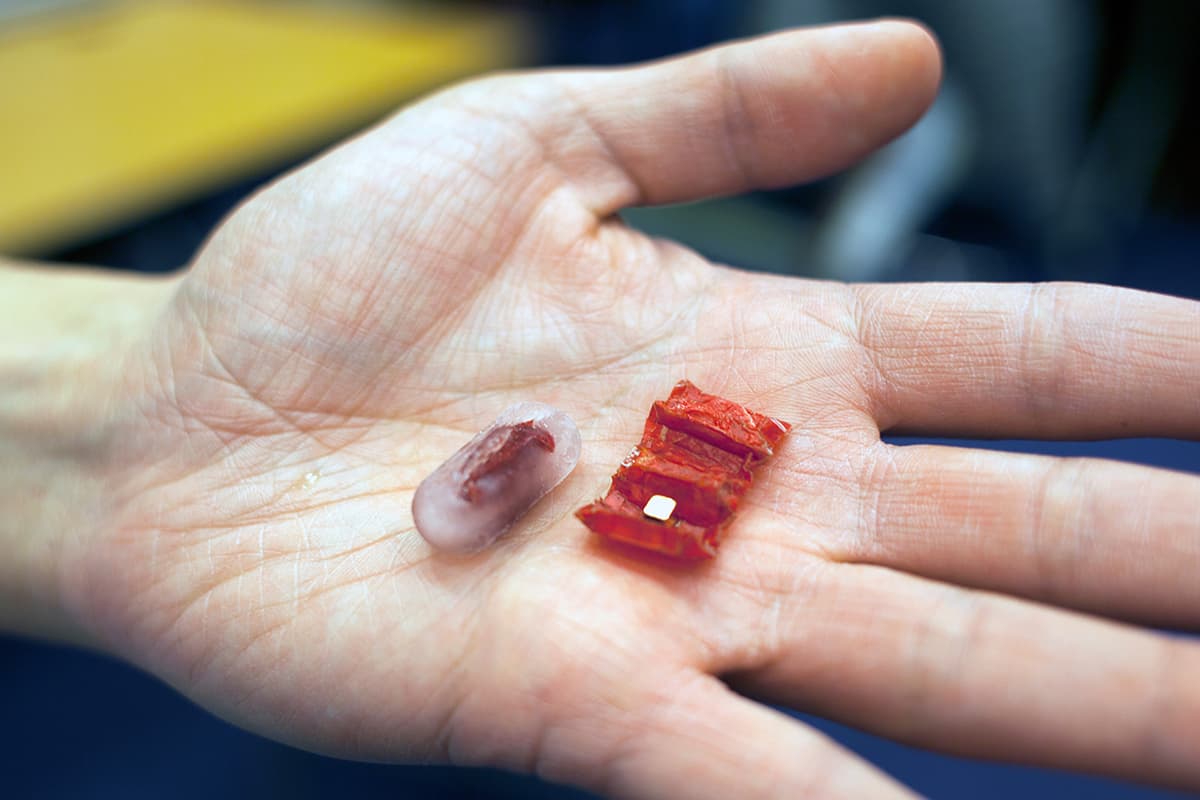 Researchers from MIT, the University of Sheffield, and the Tokyo Institute of Technology unveiled a capsule that can unfold once swallowed. The revolutionary capsule is steered by external magnetic fields and is capable of being used to help remove objects, patch up internal woulds, or deliver medicine.

The capsule is made of dried pig intestine (typically used as sausage casing) and a small magnet. When folded up it can be ingested easily by a patient, and once it reachers the stomach, it unfolds in its acidic juices where it is guided to complete the task at hand.

The design for the capsule is still a work in progress, but it does offer a lot of potential for future development and use.

"For applications inside the body, we need a small, controllable, untethered robot system," said Daniela Rus, the director of MIT’s Computer Science and Artificial Intelligence Laboratory (CSAIL) and co-creator of robot. "It’s really difficult to control and place a robot inside the body if the robot is attached to a tether."

In the demonstration however, which required the origami robot to remove a swallowed battery from the stomach, it was able to do so easily using a pig’s stomach. They filled the model with water and lemon juice in an attempt to mimic the acidity of the stomach.

The next step is now to add sensors to the robot so that it can control itself without the need of an external magnetic field.

Read This Next
WE HAVE THE TECHNOLOGY
Meet the Researchers Bringing Bizarre AI Creations to Life
Futurism
IBM Just Committed $240 Million to the Future of Artificial Intelligence
Futurism
MIT is Trying to Unlock the Power of the "Hive Mind"
Futurism
Meet the Nightmare Machine: An AI That Creates Your Worst Fears
Futurism
MIT's "Moral Machine" Lets You Decide Who Lives & Dies in Self-Driving Car Crashes
More on Artificial Intelligence
Good Morning!
8:09 PM on the byte
Startup's Plans for Robot Lawyer Nixed After CEO Threatened With Jail
Secret Sauce
6:26 PM on the byte
Amazon Begs Employees Not to Leak Corporate Secrets to ChatGPT
Bot My Fault
4:58 PM on futurism
CNET Editor-in-Chief Addresses AI Journalist's Errors and Plagiarism
READ MORE STORIES ABOUT / Artificial Intelligence
Keep up.
Subscribe to our daily newsletter to keep in touch with the subjects shaping our future.
+Social+Newsletter
TopicsAbout UsContact Us
Copyright ©, Camden Media Inc All Rights Reserved. See our User Agreement, Privacy Policy and Data Use Policy. The material on this site may not be reproduced, distributed, transmitted, cached or otherwise used, except with prior written permission of Futurism. Articles may contain affiliate links which enable us to share in the revenue of any purchases made.
Fonts by Typekit and Monotype.