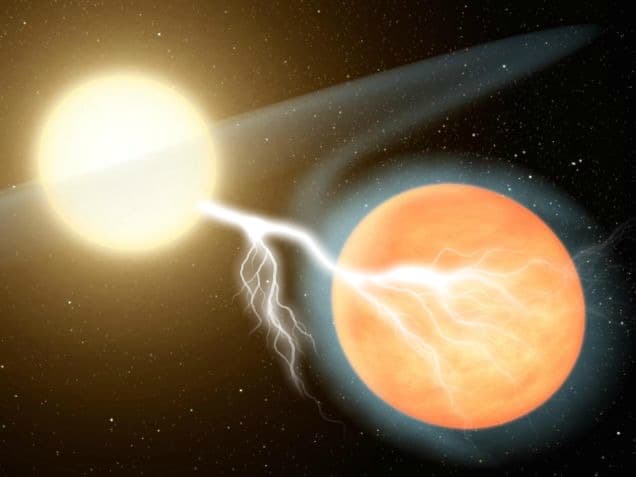 When we look at other planetary systems, we find that there are a number of different forms a planet can take. The largest, and most easily identifiable, type is the hot-Jupiter. These planets tend to be incredibly massive (often several times heavier than Jupiter itself), and situated in closer to their parent star than Mercury is to the Sun. Naturally, there are many negative consequences that come with this close proximity, which include searing temperatures, tidal stresses, a heightened intensity of solar winds, perhaps even tidal locking. As it turns out, the relationship might even be more complicated than we ever imagined, if new(ish) studies ring true.

The revolutionary Kepler Space Telescope has redefined our notions about these so-called hot-Jupiter exoplanets, revealing that they are far more prevalent than small, rocky planets orbiting inwardly. Astronomers have also learned that gas-giants in such a configuration sometimes exhibit strange "puffy" characteristics, which have been attributed to things ranging from air currents, to tidal interactions or overtly energetic stellar winds (basically anything that deals with an added source of heat), but none of these hypotheses offer an explanation for why the parent stars themselves tend to be especially prone to magnetic activity.

One model has attempted to reconcile all of the individual components by throwing electric shocks into the equation. Specifically, Dr. Derek Buzasi, an astronomer from Florida Gulf Coast University (FGCU), has proposed a model that suggests electric currents are sent reeling throughout the super-heated atmosphere of these hot-Jupiter exoplanets, which, in turn, generate the puffy appearance of certain planets. The currents, which start in the magnetosphere, are created through interactions between the magnetic field of the planet and the solar winds streaming from the star's surface, to the planet's interior (this process is akin to a planetary electric toaster). The more magnetic activity the star exhibits, the more energetic its stellar winds are, which eventually lead to the planets experiencing larger currents and hotter temperatures.

According to Buzasi, "This kind of electric heating doesn't happen very effectively on planets in our solar system because their outer atmospheres are cold and don't conduct electricity very well." "But heat up the atmosphere by moving the planet closer to its star and now very large currents can flow, which delivers extra heat to the deep interior of the planet—just where we need it," he continued. However, Earth does experience a similar phenomenon to a smaller degree, which we call a "global electric circuit." They see Earth be bombarded by currents that are only a few thousand amps at 100,000 volts or less. (Whereas, hot-Jupiter exoplanets may receive "billions of amps at voltages of millions of volts.")

To understand each and every single mechanism driving the aforementioned characteristics of hot-Jupiter exoplanets, we are still missing numerous basic details. One question that comes to mind is this: how does one of these planets become so close to its parent star to begin with? Was it formed much farther out before being sent inward somehow? If so, what set it off?

What's more is that knowing the answers to these questions could shed more light on the inner workings of our own solar system. Astronomers have long suggested that we lost one of our planets early on in our evolution. Perhaps it was ejected in a similar manner?

Read This Next
Hall Effect
Test Suggests Ion Thrusters Could Power Crewed Interplanetary Missions
Shoo
Scientists Warn Giant Asteroid Is Actually Swarm, Nearly Impossible to Destroy
What Does It All Mean?
The Second Alien Probe We Detect May Be Particularly Bizarre, Scientist Says
A Sip of Opal
NASA Discovers Precious Gemstones on Mars
And He Scores
We Are Completely Puzzled by This Video of a Chinese Astronaut Playing Ping-Pong in Space
More on Off World
Final Selection
Yesterday on the byte
NASA Finalizing Secretive Decision on First Astronauts for the Artemis Moon Mission
CHON: Legacy
Jan 29 on the byte
James Webb Discovers Coldest Ice in Known Universe, Harboring Molecules Essential For Life
Is There?
Jan 29 on the byte
NASA Setting Up Facility For Mars Rock Samples That Might Contain Alien Life
READ MORE STORIES ABOUT / Off World
Keep up.
Subscribe to our daily newsletter to keep in touch with the subjects shaping our future.
+Social+Newsletter
TopicsAbout UsContact Us
Copyright ©, Camden Media Inc All Rights Reserved. See our User Agreement, Privacy Policy and Data Use Policy. The material on this site may not be reproduced, distributed, transmitted, cached or otherwise used, except with prior written permission of Futurism. Articles may contain affiliate links which enable us to share in the revenue of any purchases made.
Fonts by Typekit and Monotype.