The technique relies on the presence of a large cluster of matter between the observer and the object to magnify light coming from that object. 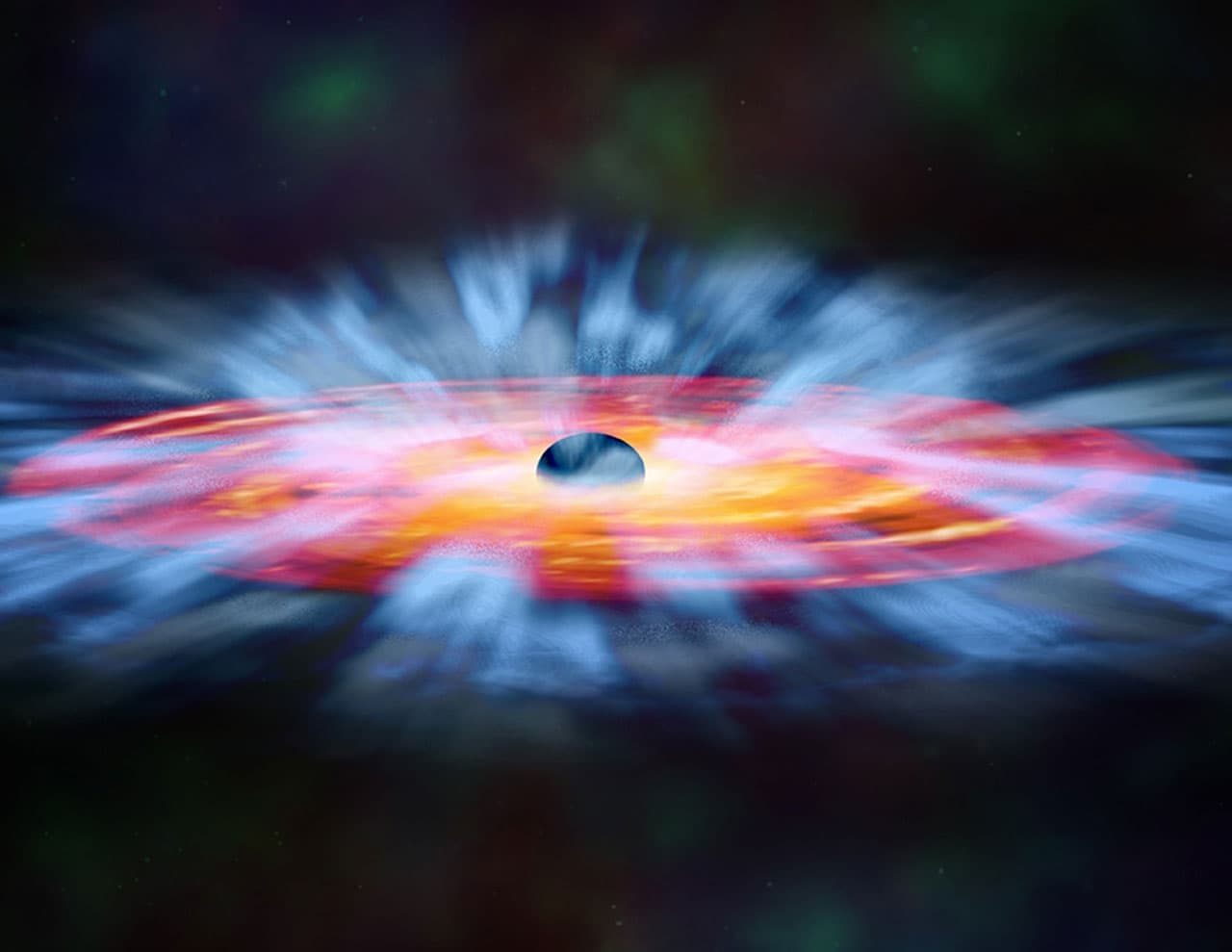 The observable Universe is an extremely big place, measuring an estimated 91 billion light-years in diameter. As a result, astronomers are forced to rely on powerful instruments to see faraway objects. But even these are sometimes limited, and must be paired with a technique known as gravitational lensing. This involves relying on a large distribution of matter (a galaxy or star) to magnify the light coming from a distant object.

Using this technique, an international team led by researchers from the California Institute of Technology’s (Caltech) Owens Valley Radio Observatory (OVRO) were able to observe jets of hot gas spewing from a supermassive black hole in a distant galaxy (known as PKS 1413 + 135). The discovery provided the best view to date of the types of hot gas that are often detected coming from the centers of supermassive black holes (SMBH).

The research findings were described in two studies that were published in the August 15th issue of The Astrophysical Journal. Both were led by Harish Vedantham, a Caltech Millikan Postdoctoral Scholar, and were part of an international project led by Anthony Readhead — the Robinson Professor of Astronomy, Emeritus, and director of the OVRO.

As the team indicated in their two studies, these observations have provided new insight into the clumps of matter that are periodically ejected from supermassive black holes, as well as opening up new possibilities for gravitational lensing research. As Dr. Vedantham indicated in a recent Caltech press statement:

We have known about the existence of these clumps of material streaming along black hole jets, and that they move close to the speed of light, but not much is known about their internal structure or how they are launched. With lensing systems like this one, we can see the clumps closer to the central engine of the black hole and in much more detail than before.

While all large galaxies are believed to have an SMBH at the center of their galaxy, not all have jets of hot gas accompanying them. The presence of such jets are associated with what is known as an Active Galactic Nucleus (AGN), a compact region at the center of a galaxy that is especially bright in many wavelengths — including radio, microwave, infrared, optical, ultra-violet, X-ray, and gamma ray radiation.

These jets are the result of material that is being pulled towards an SMBH, some of which ends up being ejected in the form of hot gas. Material in these streams travels at close to the speed of light, and the streams are active for periods ranging from 1 to 10 million years. Whereas most of the time, the jets are relatively consistent, every few years, they spit out additional clumps of hot matter.

Back in 2010, the OVRO researchers noticed that PKS 1413 + 135's radio emissions had brightened, faded and then brightened again over the course of a year. In 2015, they noticed the same behavior and conducted a detailed analysis. After ruling out other possible explanations, they concluded that the overall brightening was likely caused by two high-speed clumps of material being ejected from the black hole.

These clumps traveled along the jet and became magnified when they passed behind the gravitational lens they were using for their observations. This discovery was quite fortuitous, and was the result of many years of astronomical study. As Timothy Pearson, a senior research scientist at Caltech and a co-author on the paper, explained:

It has taken observations of a huge number of galaxies to find this one object with the symmetrical dips in brightness that point to the presence of a gravitational lens. We are now looking hard at all our other data to try to find similar objects that can give a magnified view of galactic nuclei.

What was also exciting about the international team's observations was the nature of the "lens" they used. In the past, scientists have relied on massive lenses (i.e. entire galaxies) or micro lenses that consisted of single stars. However, the team led by Dr. Vedantham and Dr. Readhead relied on what they describe as a "milli-lens" of about 10,000 solar masses.

This could be the first study in history that relied on an intermediate-sized lens, which they believe is most likely a star cluster. One of the advantages of a milli-sized lens is that it is not large enough to block out the entire source of light, making it easier to spot smaller objects. With this new gravitational lensing system, it is estimated that astronomers will be able to observe clumps at scales about 100 times smaller than before. As Readhead explained:

The clumps we're seeing are very close to the central black hole and are tiny — only a few light-days across. We think these tiny components moving at close to the speed of light are being magnified by a gravitational lens in the foreground spiral galaxy. This provides exquisite resolution of a millionth of a second of arc, which is equivalent to viewing a grain of salt on the moon from Earth.

What's more, the researchers indicate that the lens itself is of scientific interest, for the simple reason that not much is known about objects in this mass range. This potential star cluster could therefore act as a sort of laboratory, giving researchers a chance to study gravitational milli-lensing while also providing a clear view of the nuclear jets streaming from active galactic nuclei.

Looking ahead, the team hopes to confirm the results of their studies using another technique known as Very-Long Baseline Interferometry (VLBI). This will involve radio telescopes from around the world taking detailed images of PKS 1413 + 135 and the SMBH at its center. Given what they have observed so far, it is likely that this SMBH will spit out another clump of matter in a few years time (by 2020).

Vedantham, Readhead, and their colleagues plan to be ready for this event. Spotting this next clump would not only validate their recent studies, it would also validate the milli-lens technique they used to conduct their observations. As Readhead indicated, "We couldn't do studies like these without a university observatory like the Owens Valley Radio Observatory, where we have the time to dedicate a large telescope exclusively to a single program."

The studies were made possible thanks to funding provided by NASA, the National Science Foundation(NSF), the Smithsonian Institution, the Academia Sinica, the Academy of Finland, and the Chilean Centro de Excelencia en Astrofísica y Tecnologías Afines (CATA).

Read This Next
Falling In
Objects We Thought Were Black Holes May Actually Be Wormholes, Scientists Say
Black Hole Snapshot
Scientists Release Image of Black Hole at Center of Our Galaxy
Sucking Atmospheres
Scientists Spot Ravenous "Vampire" Star Devouring Its Neighbor
Yuge
Scientists Discover Enormous Black Hole Right Near Our Galaxy
EHT Tu, Black Hole
Astronomers Release Stunning New Image of Black Hole
More on Hard Science
Warped Tour
Feb 2 on futurism
Professor Believes Door to Warp Drive May Lie With Ethylene Glycol
Sky Bursts
Feb 2 on the byte
Astronomers Intrigued by 25 Mysterious Repeating Radio Signals From Deep Space
Tractor Beam
Jan 26 on the byte
Scientists Build Working Tractor Beam, Although It's Comically Tiny
READ MORE STORIES ABOUT / Hard Science
Keep up.
Subscribe to our daily newsletter to keep in touch with the subjects shaping our future.
+Social+Newsletter
TopicsAbout UsContact Us
Copyright ©, Camden Media Inc All Rights Reserved. See our User Agreement, Privacy Policy and Data Use Policy. The material on this site may not be reproduced, distributed, transmitted, cached or otherwise used, except with prior written permission of Futurism. Articles may contain affiliate links which enable us to share in the revenue of any purchases made.
Fonts by Typekit and Monotype.