Get a Remarkably Accurate 3D Printed Action Figure...Of Yourself 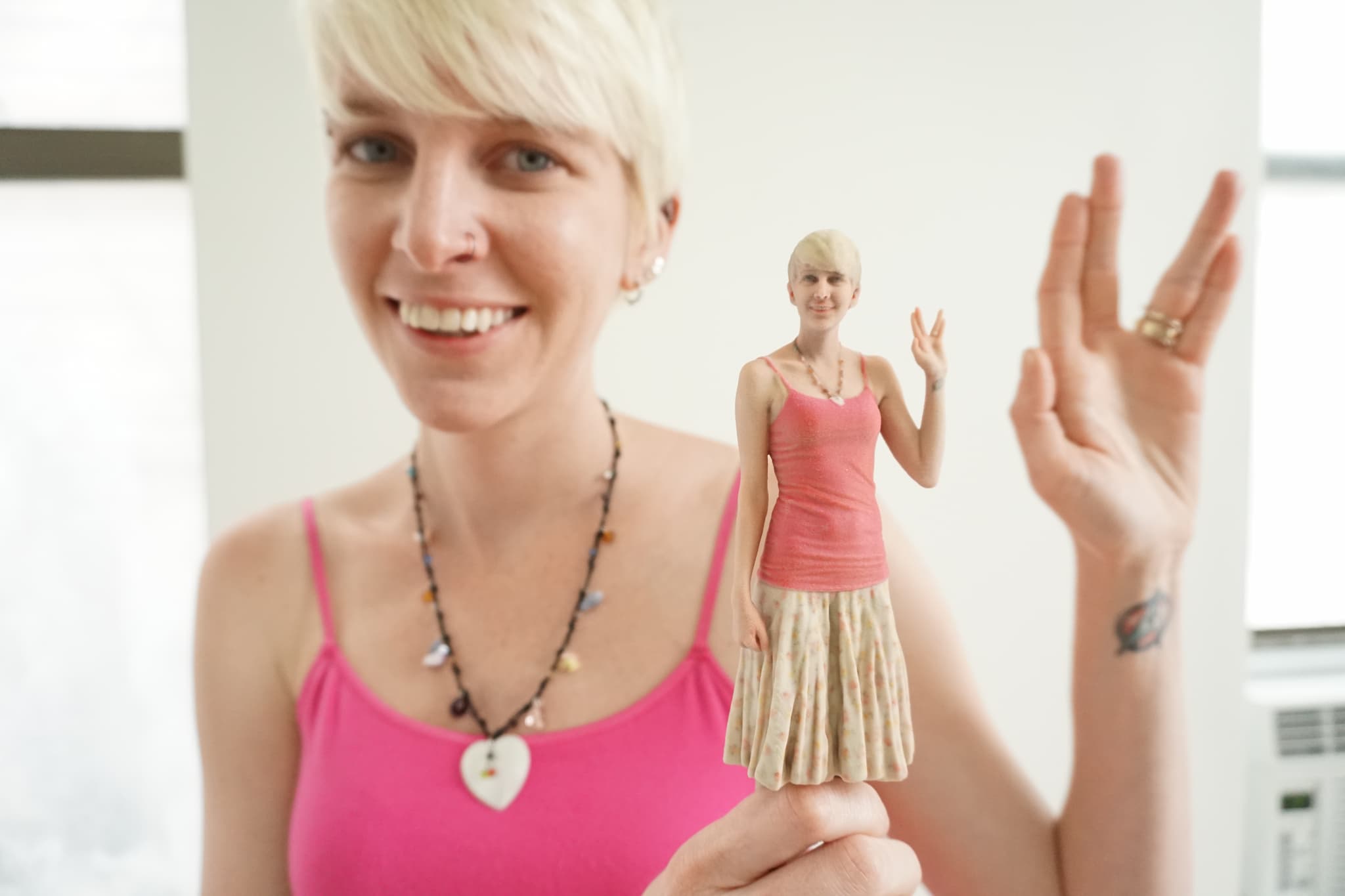 Ever wanted to be a superhero? Now you can be...or at least, you can have your own action figure (which is the next best thing, really).

It all goes back to a company known as doob. doob allows you to get a 3D printed, nearly identical replica of yourself with something they call the “dooblicator.” Recently, I met with Michael Anderson, the CEO for the USA branch of doob, to learn how the process works and, of course, to get my own mini-me.

When you get to the doob office, the process begins with cameras. Lots of cameras.

Anderson summarized how it works, “We use 54 cameras in a process called photogrammetry. All of the cameras go off at the exact same moment, and then doob's proprietary 3D software converts it into a 3D file." And he continued to note the uniqueness of their specific technology, asserting, "doob's software is really what makes the big difference in getting high resolution in a fraction of the cost and time."

And the price is quite reasonable. Depending on the size, a figure can run you as little as $95, which is far less than what you pay for typical collectables.

Notably, the method demands excruciatingly high precision in order to work properly. As Anderson notes, “It’s really all got to be timed for the exact same moment. The cameras have to be accurate to about a tenth of a second, and all of the lighting has to flash at the same time. This precision lets you capture things in motion, like jumping or twirling your dress or a moving baby.”

However, Anderson was quick to clarify that jumping may not be the best choice, as the base needs to be flat or the figure will just, well, flop over and lie their awkwardly.

Take a tour of doob, and see more of my 3D figure, in the video below:

The standard sizes run up to 14-inches for a figure, but they can actually do life-sized ones. These are 3D printed in segments and then pieced together. And across sizes, the detail is remarkable. As Anderson notes, “It’s amazing. On even a 10-inch figure, you can sometimes read the time off of a watch.

But what are the practical applications?

Of course, there is the fact that you have a remarkably lifelike figure of yourself, and the figure functions in basically the same way as a photograph—so instead of your grandparents having an image of you in your cap and gown on graduation day, they can have a realistic 3D representation that is accurate down to the very last detail.

That said, Anderson notes that Doob actually took its first steps in the healthcare industry

More Than Just a Figure

“We actually started in the medical field. We were scanning stroke patients, cancer patients, and doing things like 3D printing facial implants and prosthetics," Anderson asserts, noting the rather remarkable beginning of the tech. "But long term, it’s really all about this concept of mass customization.”

In other words, this technology could allow you to get nearly any product that is tailored just for you—from a customized prosthetic hand to a customized sundress. But the practical uses go well beyond that.

This technology is really going to change the way that we live.

“Once we have the 3D file, we can roll that into a number of different applications, a 3D printed figure is just one, and it’s a great place to start because it’s visual, it’s so engaging, and really emotional, but really, you can take that 3D file and do all sorts of stuff. You can try on clothes online, or you could be yourself in a video game, or you could use it in a fitness app to actually see how your body is changing overtime. And then to take that to the next level of customization…not only are you trying on clothes online, manufactures and retailers are able to make their clothes specifically to your body type—that could be on a personal level or it could be based on an aggregation of data that tells them what people’s bodies really look like.”

But the most remarkable thing about this tech?

Anderson asserts that, for him, it’s the fact that it’s all so new. “Every single day, someone comes in and has a new idea of what they could do with this technology, of where they could take it. We have a very long term vision of how this technology is really going to change the way that we live. But at the same time, that’s constantly building in these new ideas that the everyday person—whether it is a family member or an artist or innovator who comes in and says, ‘we could also do this’ or ‘we could add so much to this part of what we are doing’—so the fact that we’re just constantly able to keep up with the changing world and keep up with new ideas, and then build it all into one thing.”

In other words, this is a new frontier. Learn how to get your own figure here.