Why waste more straws, when you can be one of the cool kids? 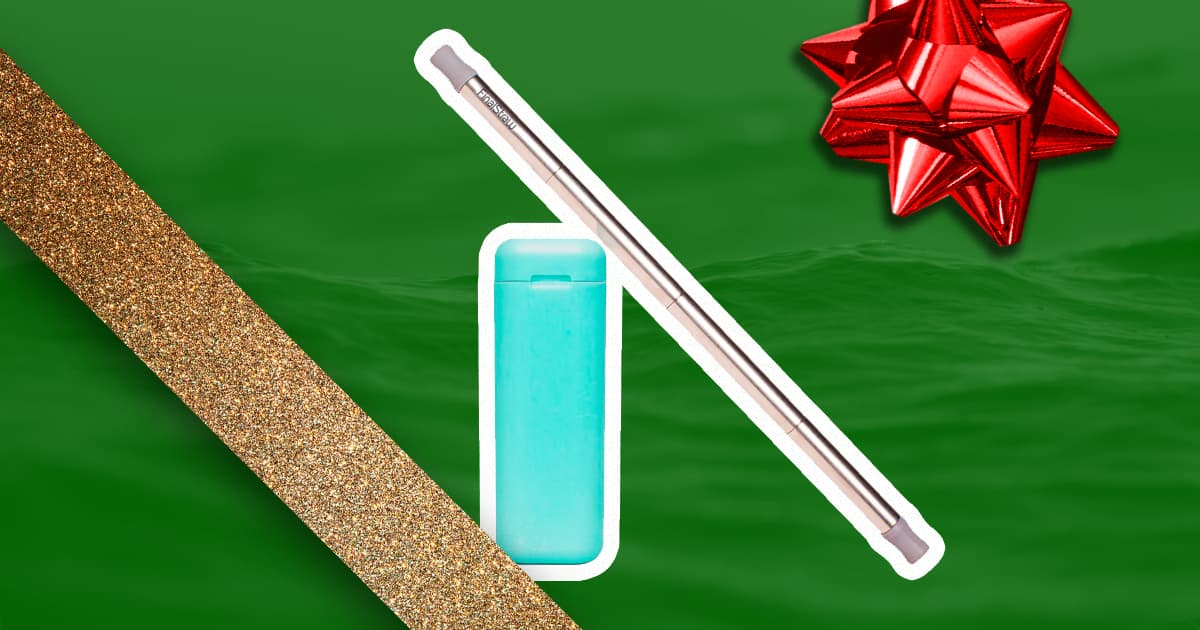 Depending on who you ask, straws are either having the worst year ever, or a revolutionary one.

For whatever reason, be it Hashtag Activism, or their ticket just finally getting punched, in 2018, everyone's starting to get hip, woke, whatever—they're fully-realizing the danger of single-use plastics (like plastic straws).

For example, the EU voted to completely ban single-use plastics.

And, bottom-lining it, whether you like it or not, the simple fact is this: On a long-enough timeline, there's never a good argument in favor of plastic straws.

Which is why everyone, all the cool kids, are getting themselves their own reusable straws. And not just any straw—a good one. Maybe one that, say, is easy to clean. Or one that you don't have to schlep around all inconvenient-like. One that comes in a few decent colors would be nice, too? Alas, enter FinalStraw: The collapsable, cleanable, folding straw-on-a-keychain that took Kickstarter by storm, to the tune of a $1.8 million-dollar crowdfunding campaign. Why all the fuss over a folding straw?

Well: It's simple to clean. It works with all to-go cups. It comes with its own case. It should last you, according to FinalStraw, about 3600 hundred cycles (or five years at twice-a-day use). It's latex-free and BPA-free. It's dishwasher safe. And the case comes in five colors.

But if none of those selling points are enough, how about this one: You'll be saving the world, one sip at a time. Also, it's a brilliantly easy, cheap stocking stuffer for anyone you know. Especially anyone intent on ruining the world with their plastic trash, or trash habits. Or people who can't drink out of the lid of a cup correctly. Or anyone who you just want to smash, with a present, into a moral equivalence quagmire, where they will be forced to reckon with their own innate selfishness and the fact that they do not, in fact, want a better world for those who come after them, and that they are—let's be perfectly clear—destined to repeat the cycles of damage, not just to our Earth, but the people on it. Because they just need to drink out of a plastic straw. That, you will argue with this person, is the reason they want their children to have a dying world.

This is a perfect gift for them.

And it only costs $25! Buy it here at FinalStraw.

Editor's note: To create this content, the editorial team sought out products we love without any consideration of payment. That said, if you buy a product through this page Futurism may receive a small commission, which helps us save up for a fleet of jetpacks.

Read This Next
Futurism
Stop Whining That Your Plastic Straws Are Disappearing. Be Glad They're Not Ending Up In Oceans.
More on Earth & Energy
Cow Chow
Yesterday on the byte
Bill Gates Gives $12 Million to Flatulent Australian Cows
Dye in the Water
Yesterday on the byte
Scientists Dye Chunks of Ocean Water Pink for Head-Turning Coastal Experiment
Face/On
Yesterday on the byte
Scientists Found a Dinosaur's Face, Complete With Its Skin
READ MORE STORIES ABOUT / Earth & Energy
Keep up.
Subscribe to our daily newsletter to keep in touch with the subjects shaping our future.
+Social+Newsletter
TopicsAbout UsContact Us
Copyright ©, Camden Media Inc All Rights Reserved. See our User Agreement, Privacy Policy and Data Use Policy. The material on this site may not be reproduced, distributed, transmitted, cached or otherwise used, except with prior written permission of Futurism. Articles may contain affiliate links which enable us to share in the revenue of any purchases made.
Fonts by Typekit and Monotype.