These Bikes Can Help Power a Home for 24 Hours, and It Only Takes One Hour of Pedaling 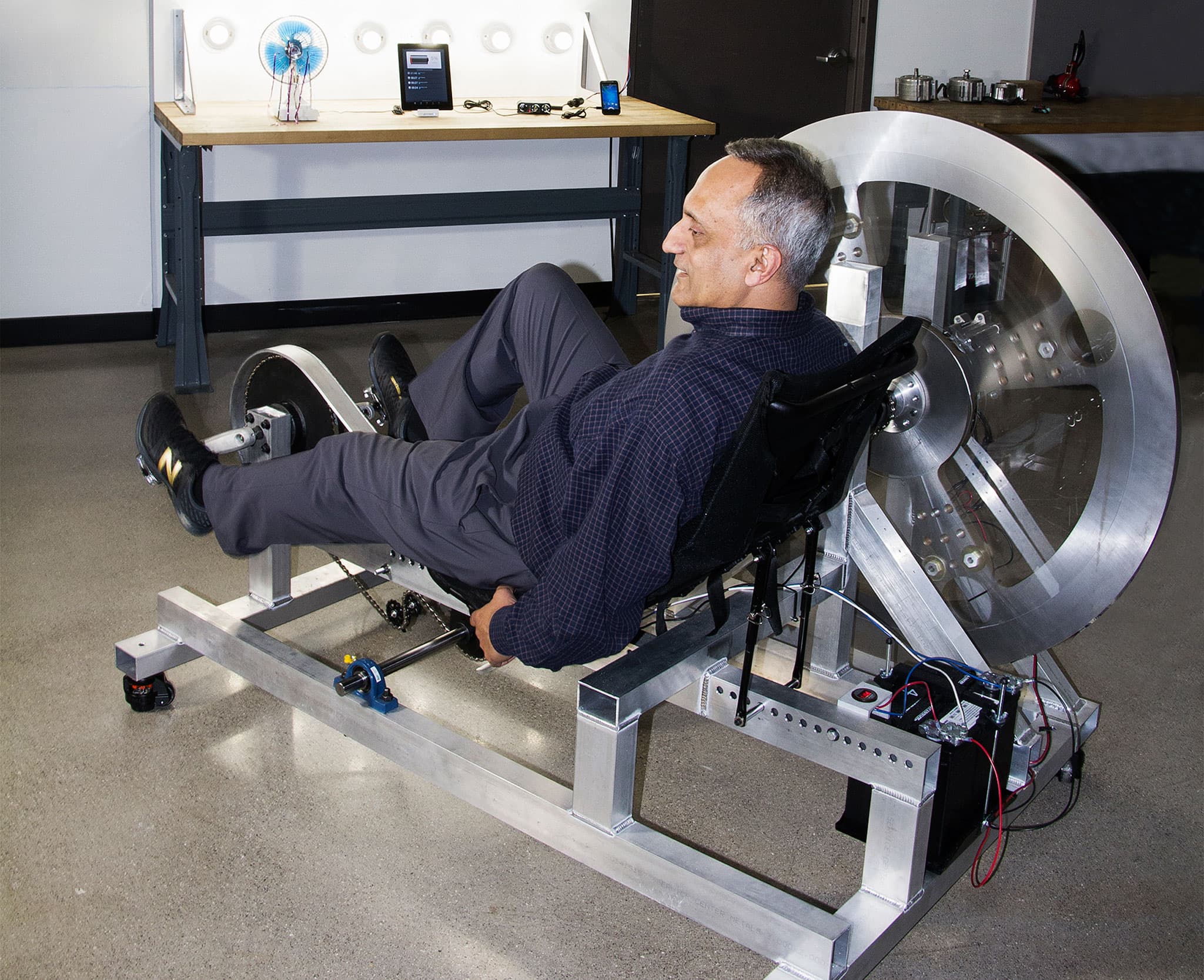 The inventor of the 5-hour Energy drink, Manoj Bhargava, has invested his billions into finding a solution for the world’s rising energy crisis. Indeed, he is giving away a substantial portion of his wealth in order to try and solve this problem.

His proposal? A personal invention that has the capacity to power homes through pedal power: Electric battery-equipped stationary bikes that will help keep lights and small appliances running for an entire day after just an hour of pedaling. Notably, this isn't just meant to create a sustainable future, this will greatly assist individuals who are currently without electricity or (perhaps more pointedly) live in remote areas and have shaky access to power. In areas that don't rely so much on technology, it could provide for nearly all of one's energy needs.

Now, Bhargava is planning to put his idea into practice—and it's costing him a staggering 4 billion dollars (but no one ever said that fixing an energy crisis was cheap).

Pedaling allows a turbine generator to create electricity that can be stored in a battery. “It’s so simple that we think we can make it for $100 … A bicycle repairman anywhere can fix it,” Bhargava says in an interview.

The first 50 of Bhargava’s invention will be rolled out in 15-20 villages in Uttarakhand before its scheduled major rollout, which is slated for 2016. According to Bhargava, he intends to incentivize the bike’s distribution, instead of giving it away for free—allowing users to truly recognize its value.

“The problem of universal energy access is so big and diverse that we need multiple innovations to solve it...Free Electric appears to be one such product innovation,” says Piyush Mathur, chief financial officer of Simpa Networks, a company that offers pay-as-you-go financing for its solar lighting.

Of course, there are some questions related to how much energy a human will have to use in order to create enough power to make this technology viable i.e., how much you'd need to exert yourself. Obviously, you can't pedal excessively slow for an hour and hope to do much good. But nevertheless, the implementation of this idea will, at the very least, allow us to troubleshoot and develop more efficient alternative methods of power generation.

Read This Next
Futurism
This Device Could Power One-Third Of The U.S. Using Ocean Waves
Futurism
We Have a New Way To Create Super-Efficient Liquid Batteries
Futurism
Trash is Helping Protect Hawaii's Air Force Units
Futurism
Cracking the “Americium Problem”—Researchers Find a Way to Safely Store Nuclear Waste
Futurism
Panasonic Sets World Record in Photovoltaic Energy Conversion Efficiency
More on Robots & Machines
Balloon Pop
Yesterday on the byte
Footage Shows Chinese Balloon Being Shot Down
From the Dept. of...
Thursday on futurism
The Best Mini Fridges of 2023
Blow Up Doll
Monday on the byte
Ukraine Accuses Russia of Using Inflatable "Dummy Tanks," Which Deflated
READ MORE STORIES ABOUT / Robots & Machines
Keep up.
Subscribe to our daily newsletter to keep in touch with the subjects shaping our future.
+Social+Newsletter
TopicsAbout UsContact Us
Copyright ©, Camden Media Inc All Rights Reserved. See our User Agreement, Privacy Policy and Data Use Policy. The material on this site may not be reproduced, distributed, transmitted, cached or otherwise used, except with prior written permission of Futurism. Articles may contain affiliate links which enable us to share in the revenue of any purchases made.
Fonts by Typekit and Monotype.