The "Doomsday Clock" Is Now Set at "Two Minutes to Midnight"

It matches the tensions of the Cold War's darkest hour. 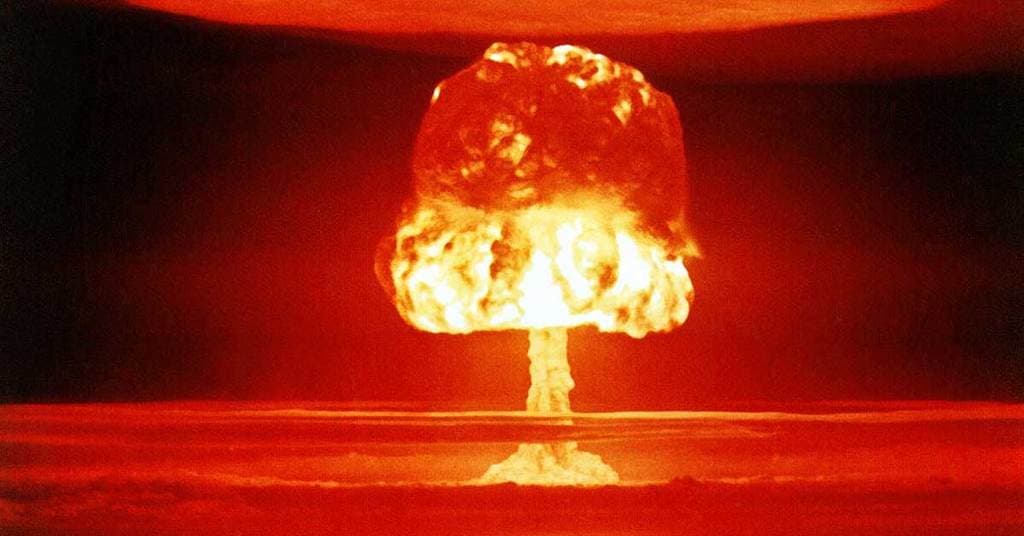 For the second year in a row, the Bulletin of Atomic Scientists has moved the symbolic "Doomsday Clock" thirty seconds closer to midnight. The clock, which exists to show how close humanity is to annihilation, is now uncomfortably sitting at "two minutes to midnight," matching the closest the it has ever come to the zero hour in its entire 71-years of existence. The last time the clock was in this position was when the United States and the Soviet Union performed test detonations of hydrogen bombs.

Rachel Bronson, president of the Bulletin of Atomic Scientists spoke to reporters directly citing “the failure of President Trump and other world leaders to deal with looming threats of nuclear war and climate change.” The panel points to the Trump's administration's loosening of the country's policies on nuclear weapons use and development as a signal that the President intends to follow up his rhetoric with dangerous actions.

The panel also is concerned with the state of nuclear programs in Pakistan, India, Russia, and North Korea, and respective leaders' responses to ratcheting up tensions. The statement included other factors like Trump's resistance to supporting any deals that would lead to monitoring of Iran's nuclear program, as well as China's claims to territory in the South China Sea.

According to the Bulletin, an increasingly fractured response to climate change is the last crucial factor that is pushing the clock's hand towards the end of humanity. The threats posed by climate change make the Doomsday Clock tick since 2007, when the Bulletin described them as "nearly as dire" as the threat of nuclear weapons.

Turn Back the Clock

Even for a symbolic exercise like the Doomsday Clock, the return to a time of fear as dire as the Cold War is unsettling. And what's remarkable, never before this level of global risk has been so closely tied to the words and actions of a single man.

In an op-ed penned for the Washington Post last year, when the clock was moved to 2.30 minutes to midnight, Lawrence M. Krauss and retired Navy Rear Adm. David Titley said, “Never before has the Bulletin decided to advance the clock largely because of the statements of a single person. But when that person is the new president of the United States, his words matter.”

It has gotten to the point where experts and lawmakers are discussing restricting the President's powers to use nuclear weapons. Foreign relations experts Jeffrey Bader and Jonathan D. Pollack would welcome new rules stripping Trump of the ability to launch a nuclear strike on his own authority.

Even if such a resolution ever made it through a Congress controlled by the President's own party, that just addresses one of the troubling players in this dangerous powder keg of global affairs. It will take much more skillful diplomacy to turn the tide away from the possibility of a global arms race of the likes of the Cold War.

The world's response to climate change must also seek a renewed cohesion if we hope turn back the steady trend of which the Doomsday Clock is just a headline-grabbing indicator. One important step would be for the United States to rethink the resolution to move away from the Paris Agreement and defund important scientific research.

Read This Next
What's a Space Force?
Progressive Groups Call For Elimination of Space Force
Like a 6G
Trump Calls For "6G," Which Doesn't Exist
Futurism
Donald Trump Is Still Going in on Jeff Bezos and Amazon, Still Getting Basic Facts Laughably Incorrect
Futurism
There Are Strict Rules About What Some Federal Employees Can Say on Social Media
Futurism
What Are the Real Threats Behind Nuclear War?
More on Future Society
Rough
Yesterday on futurism
Elon Musk's Twitter Is Reportedly Failing Miserably to Contain Horrific Child Abuse Content
YouTube Propaganda
Yesterday on the byte
Experts Say There's Something Very Weird About North Korean YouTubers
Bird Crap
Feb 4 on the byte
It Looks Like Elon Musk Is Actually Building a Twitter Payment Platform
READ MORE STORIES ABOUT / Future Society
Keep up.
Subscribe to our daily newsletter to keep in touch with the subjects shaping our future.
+Social+Newsletter
TopicsAbout UsContact Us
Copyright ©, Camden Media Inc All Rights Reserved. See our User Agreement, Privacy Policy and Data Use Policy. The material on this site may not be reproduced, distributed, transmitted, cached or otherwise used, except with prior written permission of Futurism. Articles may contain affiliate links which enable us to share in the revenue of any purchases made.
Fonts by Typekit and Monotype.