Does the Sun Look Scary? It Might Be the Dreaded "Doom Sun" 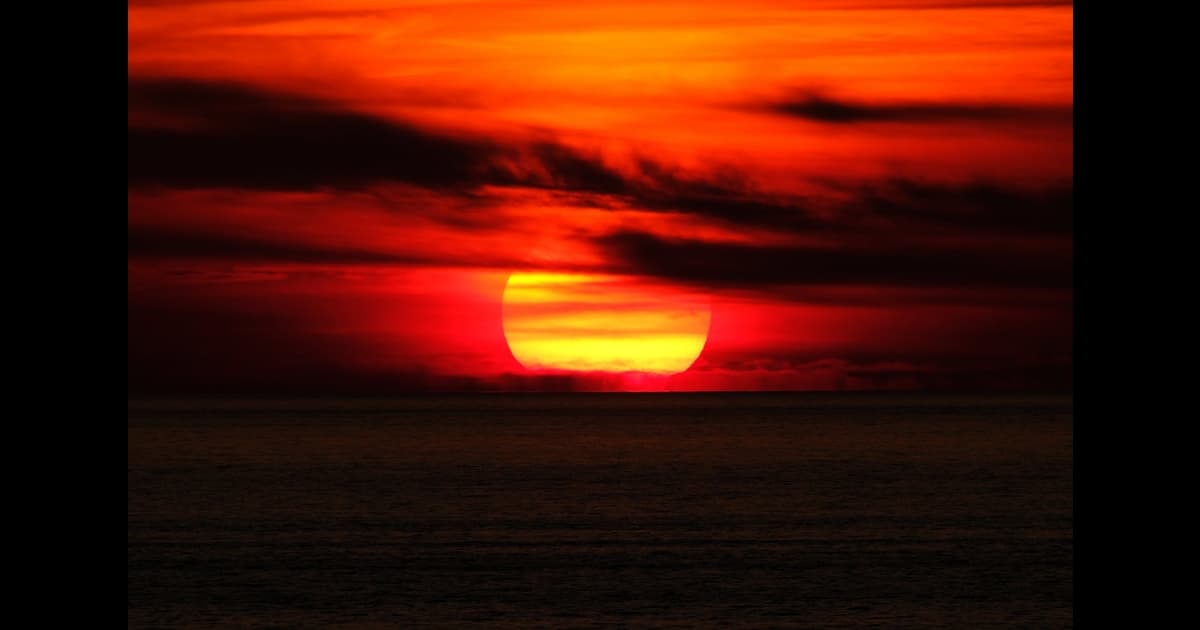 Throughout the summer, you might have looked to the skies and noticed that the Sun looked distinctly scarier than usual.

This is the dreaded "Doom Sun." It’s a phenomenon that’s typified by a hazy sky causing the Sun to take on its spooky, apocalyptic appearance.

Doom sun is back. pic.twitter.com/CvNzfle8JI

While it’s certainly surreal looking, it can’t be as bad as it looks… right? Well, actually it might be an indicator of some pretty bad things happening to our environment.

In fact, Doom Suns are typically seen in places where there are frequent forest fires like in California, Washington, and Colorado. The science behind it is fairly straightforward: The Sun typically shines red and orange light. Those colors have longer wavelengths than say blue or purple.

Smoke or other particulates scatter those light waves longer, making them appear more vibrant and vivid. Here’s a good example of this concept in action after the Pine Gulch fires in Colorado in 2020:

Our sunset tonight with the smoke from the #PineGulchFire approximately 45 miles southwest of where I live. We have an Air Quality Health Advisory in effect. #COwx pic.twitter.com/Dfbzz5V9l0

Since smoke drifts and spreads with air currents, they can create Doom Suns in places hundreds or even thousands of miles away. For example, the Pine Gulch fires created a Doom Sun in Denver despite being more than 300 miles away from the fire itself.

While Doom Suns used to be a primarily West Coast and Southeastern US issue, folks across the country have seen them as wildfires have been running more and more rampant.

Just this past summer, people in places as far away as New York City have seen Doom Suns due to massive forest fires in the West Coast and Canada.

Smoke from the Western wildfires is continuing to invade our skies this morning.

An advancing cold front generates scattered showers and thunderstorms later today, and a few may be severe. Good news is the front helps clear our skies out some tonight. pic.twitter.com/u7jIWmyX3z

Man-made pollution and smog can create Doom Sun events too, but these are more rare because smog particles aren’t as effective in scattering light, according to HowStuffWorks.

Smoke and debris from volcanic eruptions often result in some of the most frightening and gorgeous looking Doom Suns. Here’s a great looking sunset in Kansas that occurred after an eruption of the Kasatochi volcano in Alaska:

They can also occur without a clear cause like a wildfire or smog, which further adds to the horrifying mystique of the spectacle.

It’s definitely worth noting that no matter how cool a Doom Sun looks, you absolutely should not stare at them. Just because there’s smoke in the way (and the Sun looks more awesome than it’s ever looked before) doesn’t mean direct sunlight won’t have a disastrous effect on your eyesite.

Fight the allure to stare at the Doom Sun. Fight it! Instead, we recommend you just look at pictures of them instead. Here are a few to hold you over the next time a Doom Sun appears above your head:

Here’s what our sun and sky look like in our Southern California town due to the fires. pic.twitter.com/RvGHpsr9gj

I’m not an expert but this seems like a bad thing pic.twitter.com/Oo5p3s7F2v

Obligatory photo of the Doom Sun in Sydney this arvo pic.twitter.com/mnLl8xOw72

In the end, Doom Suns are a scary, beautiful, and sobering reminder of our negative impact on the environment.

If we don’t change course soon (and start toppling big corporations ravaging the Earth's environment), we can expect to see them more often than we see the regular Sun.