The country issues its first red alert for toxic smog. 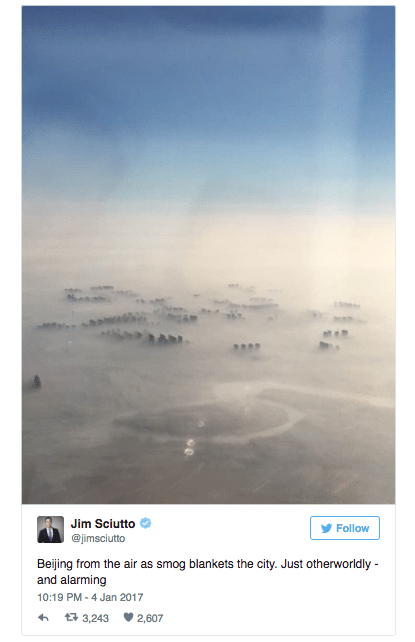 Hundreds of flights were canceled in Beijing and Tianjin. City highways were shut down as the smog rendered roads unsafe for driving. And concentrations of small, breathable particles called PM2.5, which can lead to asthma and chronic lung disease, reached over 500 micrograms per cubic meter–50 times higher than World Health Organization (WHO) recommendations.

Twenty-four Chinese cities, mostly those located in Northern China, have since issued red alerts (the highest of four levels), given the state of pollution enveloping the country. Other cities, including Beijing and Tianjin, are currently under orange alerts.

This time-lapse video captures the smog as it begins to blanket Beijing in a span of 20 minutes.

It’s a worrying vision of the price we pay for industrialization.

According to an article published in the South China Morning Post who spoke to the country’s Minister of Environmental Protection, Chen Jining:

[…] winter heating, industrial emissions and automobile exhausts were major contributors to smog, but the low air quality was also caused by unfavourable weather conditions linked to a very strong El Nino over the Pacific from 2015 to last year.

Also, while the country has pledged to lower emissions and dedicated billions in support of renewable energy, plummeting winter temperatures and rising electricity demand during this season inevitably led increased burning of coal, which is still the country’s main source of energy.

The smog marks the worst episodes of air pollution China has seen and has affected 460 million people. To that end, the ministry has detailed several steps that they hope will lower winter smog, including shutting down (or at least reducing production) high emission cement and steel factories during winter and restricting the use of coal, especially in rural homes.

China Isn’t Taking Our Recycling. Here’s What We Could Do With It Instead.