This case truly has everything. 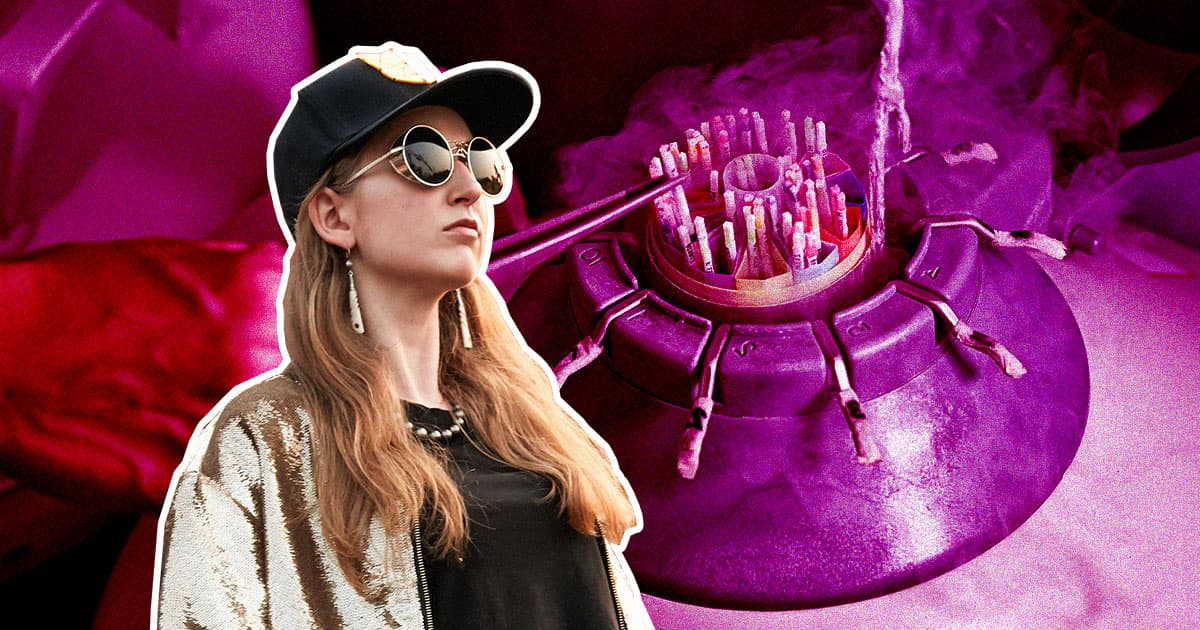 Good news: the rapping CEO who got arrested for an alleged crypto laundering scheme this week isn't a flight risk because — get this — she wants to stay close to her frozen eggs.

As CNBC reports, filings made on behalf of Heather "Razzlekhan" Morgan and her husband Ilya Lichtenstein following the couple's arrest on federal money laundering charges claim that the spouses aren't likely to flee because they intend to use the frozen embryos to start a family soon.

"The couple would never flee from the country at the risk of losing access to their ability to have children," lawyer Samson Enzer wrote in the filing, "which they were discussing having this year until their lives were disrupted by their arrests in this case."

Enzer also intimated that the couple was aware of the federal government's investigation when he claimed that Lichtenstein and Morgan "both stayed put in their residence in lower Manhattan" after learning in November 2021 via their internet service provider that a grand jury subpoena had been served a year prior for records on them.

Today they were arrested for trying to launder billions in stolen crypto. They face up to 20 years in prison. pic.twitter.com/iUNRJDfVfL

Aside from revealing some of this salacious detail about the couple's use of reproductive technology, the CNBC report also notes more of the circumstances surrounding the case, including that the $3.6 billion in stolen Bitcoin seized by the feds is now the largest single financial seizure the Justice Department has ever made.

That stolen Bitcoin, taken during the 2016 Bitfinex heist, was transferred to a crypto wallet at the time of the hack that, by 2022, Lichtenstein was in control of, federal prosecutors claim.

Ahead of the couple's scheduled court appearance in Washington, DC, prosecutors urged the district court judge presiding over the case to jail them without bail because Lichtenstein and Morgan are allegedly, according to filings, "sophisticated cyber criminals and money launderers who present a serious risk of flight and should be detained pending trial."

Their lawyer pushed back against the denied bail request, saying in counter-filings reviewed by CNBC that, in essence, the government's arguments against the couple are based on the feds misunderstanding the blockchain — which, to his credit, is a pretty ballsy clapback.

This case truly has everything: alleged money laundering, bad white girl rap, a wholesome love story, and, of course, the classic crypto bro claim that everyone just doesn't get it.

More on the meta-media aspect of the case: The World's Biggest Crypto Exchange is Investing $200 Million in Forbes, a Site Where Anyone Can Shill Crypto

Read This Next
Dubious Donations
Politicians Refuse to Say Whether They'll Give Back Donations From Sam Bankman-Fried
Apes Ahoy
A Major NFT Project Is Falling Apart in a Storm of Lawsuits
Rube Goldbergian
The Dune NFT Project Is Back With an Inscrutable New Scheme
Regulating Crypto
Hillary Clinton Calls Out Crypto Exchanges for Letting Russia Bypass Sanctions
Wrong-Clicker
Knockoff eBay NFTs Are Kind of Based, Actually
More on Future Society
Rough
Monday on futurism
Elon Musk's Twitter Is Reportedly Failing Miserably to Contain Horrific Child Abuse Content
YouTube Propaganda
Monday on the byte
Experts Say There's Something Very Weird About North Korean YouTubers
Bird Crap
Feb 4 on the byte
It Looks Like Elon Musk Is Actually Building a Twitter Payment Platform
READ MORE STORIES ABOUT / Future Society
Keep up.
Subscribe to our daily newsletter to keep in touch with the subjects shaping our future.
+Social+Newsletter
TopicsAbout UsContact Us
Copyright ©, Camden Media Inc All Rights Reserved. See our User Agreement, Privacy Policy and Data Use Policy. The material on this site may not be reproduced, distributed, transmitted, cached or otherwise used, except with prior written permission of Futurism. Articles may contain affiliate links which enable us to share in the revenue of any purchases made.
Fonts by Typekit and Monotype.