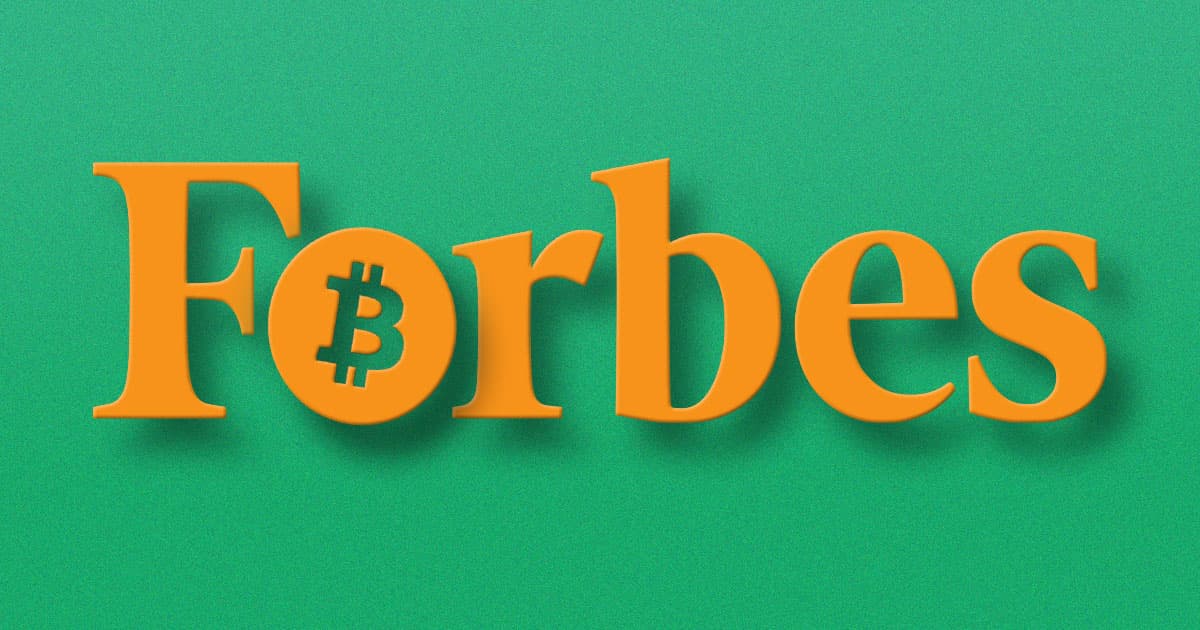 The World's Biggest Crypto Exchange Is Investing $200 Million in Forbes, a Site Where Anyone Can Shill Crypto

Okay, this is messy.

Okay, this is messy.

Binance, the world's largest cryptocurrency exchange, is making a substantial investment of $200 million in the magazine-turned-digital-publishing-empire Forbes as the website moves towards an initial public offering with the help of a "special purpose acquisition company," CNBC reports.

The deal is noteworthy because of what it represents for the relationship between the burgeoning crypto industry and the media — and, depending on where you stand, it could be very bad news.

The century-old Forbes was once one of the most prominent business publications on the planet, but it's struggled over the last two decades. According to an excoriating analysis by Harvard's Nieman Lab, the company has resorted to taking on more than 3,000 mostly unvetted "contributors," many of whom have been caught or admitted to being involved in pay-to-play schemes — which of course violates the core principles of journalistic integrity, a terrible look for what was once a top financial magazine.

At their most egregious, the payoffs can be horrifying. Take one Forbes contributor who admitted to having taken $600 to publish a balmy puff piece on the site about disgraced financier and sex criminal Jeffrey Epstein.

Where does all that connect to the Binance deal? Well, one of the top industries shilled by that horde of little-scrutinized Forbes contributors is blockchain. And the publishing industry isn't exactly a hot investment these days, which raises the possibility that Binance's motivation for the cash infusion could be to buy a friendly slice of the media for itself and its various investments.

The CEO of Binance, Changpeng Zhao, did little to assuage those concerns after the deal was announced.

"Invest in both new and old, and bridge them with crypto," he wrote on Twitter.

Then he seemed to reverse course.

"Had some questions in my DMs," he wrote in a followup. "Forbes editorial independence is and will always be sacrosanct. The strength of the Forbes brand and our investment depends on that continued independence."

Regardless what Zhao really meant — and what "editorial independence" means for a system that lets essentially anyone publish, regardless of conflicts of interest — the deal could be a serious headache both for the health of the news ecosystem and for Binance itself.

There's no question that Forbes' contributor network model has already inserted it into some strange and uncomfortable places in the little-regulated crypto ecosystem, which could attract significant scrutiny now that it's financially entangled with crypto interests.

Take Heather Morgan, a Forbes contributor and self-described crypto CEO who was arrested by federal law enforcement alongside her husband Ilya Lichtenstein this week for what authorities say amounted to laundering $4.6 billion — that's "billion" with a "b" — in bitcoin stolen from Bitfinex, another crypto exchange that's a direct Binance competitor.

Morgan's tortuous relationship with journalism, crypto and hacking don't end there. As online sleuths quickly pointed out, even wrote a piece for Forbes on how to avoid becoming the victim of cyber crimes.

"Nonetheless, the mere mention of crypto in relation to this system gets my hackles up," wrote Nieman's Joshua Benton. "Coins soar and drop with the slightest touch, and a 'Forbes Calls Wrapped DorkCoin 'A Billionaire-Maker'' tweet, with a real Forbes.com link, can certainly be abused by people with interests at play."

So to spell all that out, a major crypto exchange is buying into a once-respected business publication where it's now widely known that anyone with a few thousand bucks can buy positive coverage, and where countless contributors are allowed to publish underscrutinized pieces about the crypto market, including one writer who was literally busted for laundering crypto stolen from a competitor of the exchange investing in Forbes.

What does that all mean? It's tough to say. But it's safe to say that it's a flabbergastingly messy situation that's doing no favors to the handful of talented staff journalists who are still doing their best at Forbes.

More on Forbes: One Of The Web’s Most Prolific Online Marketing Writers Has Been Promoting His Clients In Articles For Forbes, Entrepreneur, And Inc. Magazine [BuzzFeed News]