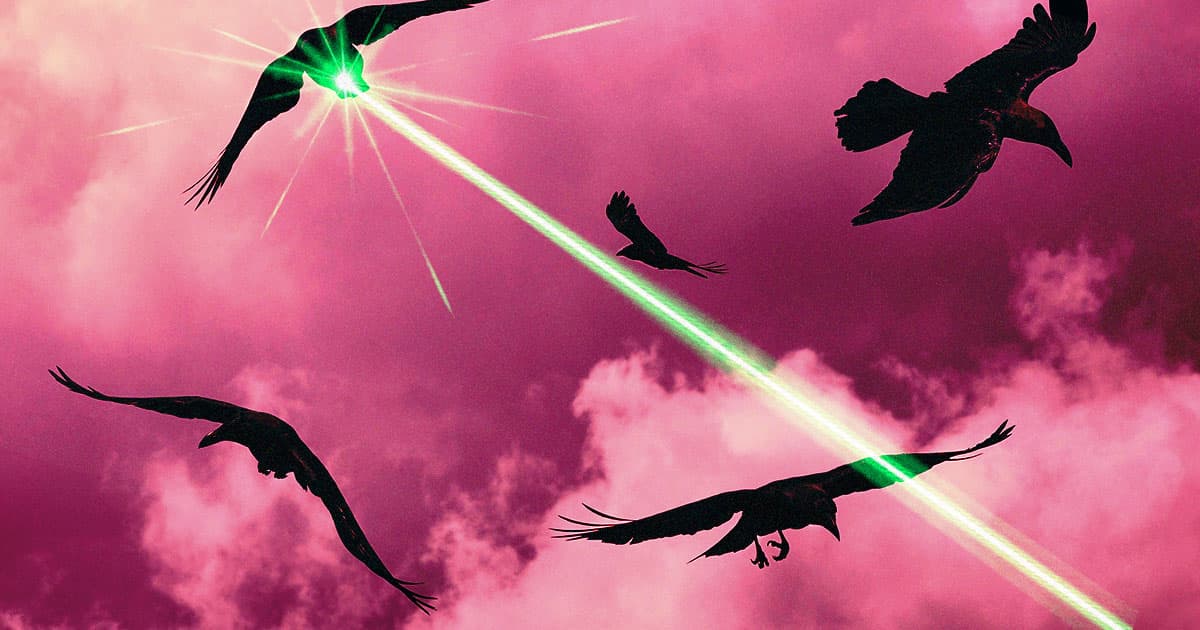 Think your town is bad? At least you don't have such a bad crow problem that officials are planning to use lasers to get rid of them — that is, unless you live in Sunnyvale, California.

First reported by San Jose's Mercury News, Sunnyvale isn't the only Bay Area city to be experiencing an uptick in "murders" — that's the technical term for a group of crows, believe it or not — but it is the first to propose the use of green lasers to deal with them.

Thus far, nobody has yet put forth a compelling reason for this pandemic-era invasion of the garbage-snatchers in the city, which is nestled between Google and Apple's headquarters in Mountain View and Cupertino, respectively.

While crows have always roosted in this Bay Area city, as they do in much of Central and Southern California, the flock has grown since spring 2020 to be about 1,000 in size — a substantial amount of crows-per-capita for Sunnyvale, where the 2019 population was about 152,000. With crows "dive-bombing" people outside and night, rooting through trash, and defecating all over the sidewalks of the city's downtown, the city's been trying to figure out ways to stop the scourge.

"When the sun starts going down," Sunnyvale resident Frank Hampton told the local ABC affiliate, "they come around."

#Crows everywhere, and #Sunnyvale's going to do something about ithttps://t.co/MP4XEAJ2gB

Trying everything from effigies in trees to a hired falconer to scare off the crows, Sunnyvale Mayor Larry Klein and his staff have studied and are about to implement a different approach: inexpensive green laser pointers that appear to "spook" the birds off without harming them.

"It actually does seem to work," Klein told CBS affiliate KPIX 5. "It does have them scatter from the tree and we’ll try that for a few weeks and ultimately we’ll see if that actually works."

While there's USDA evidence from the cities of Rochester, Minnesota and Auburn, New York that these cheap green lasers are an effective crow repellant, the local Audubon Society isn't convinced that it's a safe or permanent solution.

"We don’t see the use of lasers as a reasonable way to address the problem of overpopulation among these intelligent birds. They may leave for a while, but will likely return," the Santa Clara Audubon Society said in a statement provided to KPIX 5. "We question the legality of this tactic and believe it requires a permit if it is allowed at all."

"Additionally, lasers pose a threat of blindness to the birds which we cannot condone, as well as a risk to humans and aircraft," the statement continued, adding that the city should consult with the Department of Fish and Wildlife lest they find themselves in violation of the Migratory Bird Treaty Act.

While the potential for a showdown between Sunnyvale city government and local environmentalists is high, so too are residents' frustrations — and ultimately, it may teach other towns a lesson in how to get away with murder.

READ MORE: Crows everywhere, and Sunnyvale’s going to do something about it [The Mercury News]

More corvids: Scientists Claim to Have Proven that Crows Have Conscious Experiences

Read This Next
Hurricane Season
Oops! Fusion Facility Keeps Failing to Recreate Last Year's "Breakthrough" Record
The Humanity!
Chimpanzee Star of "Buddy" Found Alive After His Owner Allegedly Faked His Death
Futurism
AI That Counts And Identifies Wildlife Could Be A Game-changer For Ecologists
Futurism
Changing Regulations Mean Genetically Modified Meat Could Soon Be on Your Plate
Futurism
OMEGA Laser Could Produce Nuclear Fusion at 5 Times Current Levels
More on Earth & Energy
His Power
Yesterday on the byte
Scientists Develop Compound That Kills So Efficiently They Named It After Keanu Reeves
Dishonorable Disc...
Monday on the byte
Scientists Alarmed by Video of Deep Sea Mining Company Spewing Waste Into Ocean
Save Yourselves
Feb 5 on the byte
Furious Marsupial So Thirsty For Sex That It’s Dying, Scientists Warn
READ MORE STORIES ABOUT / Earth & Energy
Keep up.
Subscribe to our daily newsletter to keep in touch with the subjects shaping our future.
+Social+Newsletter
TopicsAbout UsContact Us
Copyright ©, Camden Media Inc All Rights Reserved. See our User Agreement, Privacy Policy and Data Use Policy. The material on this site may not be reproduced, distributed, transmitted, cached or otherwise used, except with prior written permission of Futurism. Articles may contain affiliate links which enable us to share in the revenue of any purchases made.
Fonts by Typekit and Monotype.