Would you use a parking space for coworking? 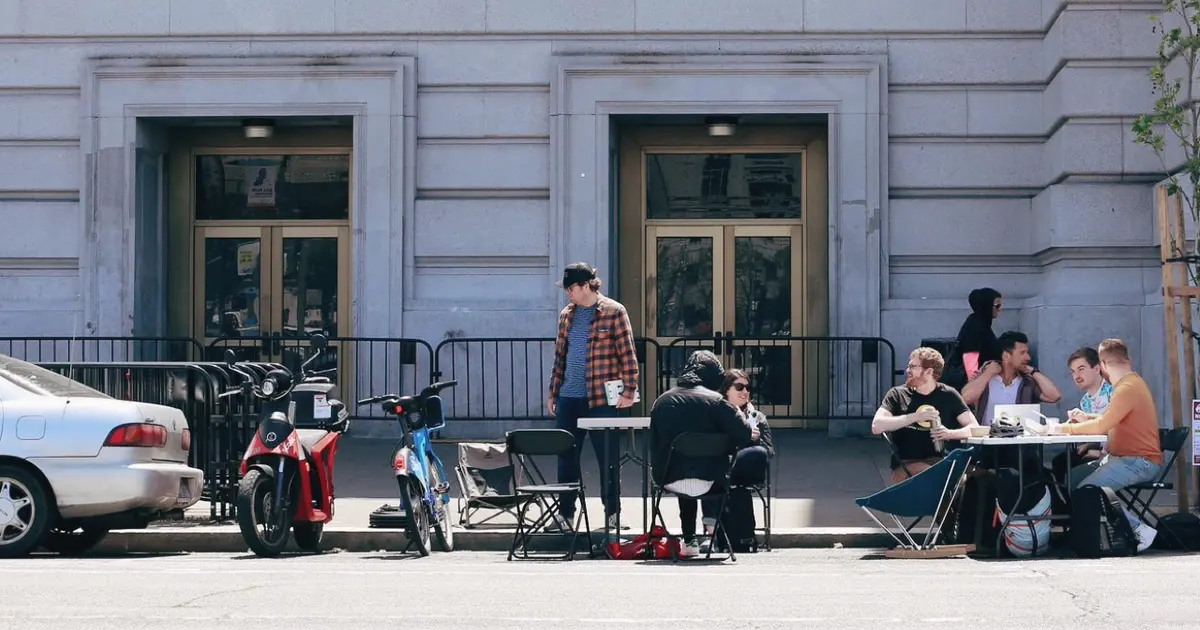 Web developer Victor Pontis has had enough of cars in San Francisco — parking spaces, he says, just take up too much space.

I have set up at 16th and Market and paid the meter a reasonable $2.75 for one hour.

Stop by and say hi! pic.twitter.com/qJCJudEWsh

The experiment struck a nerve — especially considering the skyrocketing rent in the Californian metropolis — and picked up widespread press coverage.

We had 3 events across the world today:

And we hear more are coming soon to a city near you! pic.twitter.com/cGnea3G9VQ

Pontis got the idea from a tweet by developer Devon Zuegel, who posted a picture of a specialized bike carrier vehicle that can fit eight bikes in a single parking spot.

This mobile parklet fits 8 bikes. With a license plate, it can be legally parked anywhere for the price of parking 1 car. Genius. https://t.co/cFshYA4C1N pic.twitter.com/p6xTfLd5CA

WePark has quickly garnered the attention from freelancers across the globe. Its operations have expanded to Santa Monica — and a related event even took place in France.

The question remains: is WePark more than a publicity stunt that takes a clear stance against San Francisco's — perhaps even an American — obsession with cars? That's hard to tell. But momentum is growing behind the idea regardless.

READ MORE: A Rogue Coder Turned a Parking Spot into a Coworking Space and People Loved It [Vice]

More on the sharing economy: People Love Living in Pods So Much They’re Getting Neck Tattoos About It

Read This Next
From Our Partners
How To Work In An Office That Suits You, Anywhere!
Brands We Love
This Autonomous WorkPod Is the Ultimate Distraction-Free Home Office
Futurism
This Sexy Burger Machine Won't Necessarily Steal Your Job, But Could Make It Better
More on Sci-Fi Visions
Human v. Giraffe
Tuesday on the byte
Chaotic Italian Fashion Line Baffles Facial Recognition Software
Step One
Tuesday on the byte
World’s Third Richest Person Says He’s Developed "Addiction" to ChatGPT
FROM THE DEPT. OF...
Tuesday on futurism
The Best Places to Buy A Laptop in 2023
READ MORE STORIES ABOUT / Sci-Fi Visions
Keep up.
Subscribe to our daily newsletter to keep in touch with the subjects shaping our future.
+Social+Newsletter
TopicsAbout UsContact Us
Copyright ©, Camden Media Inc All Rights Reserved. See our User Agreement, Privacy Policy and Data Use Policy. The material on this site may not be reproduced, distributed, transmitted, cached or otherwise used, except with prior written permission of Futurism. Articles may contain affiliate links which enable us to share in the revenue of any purchases made.
Fonts by Typekit and Monotype.