Could the Universe Be Conscious?

Some of the world's most renowned scientists are questioning whether the cosmos has an inner life similar to our own. 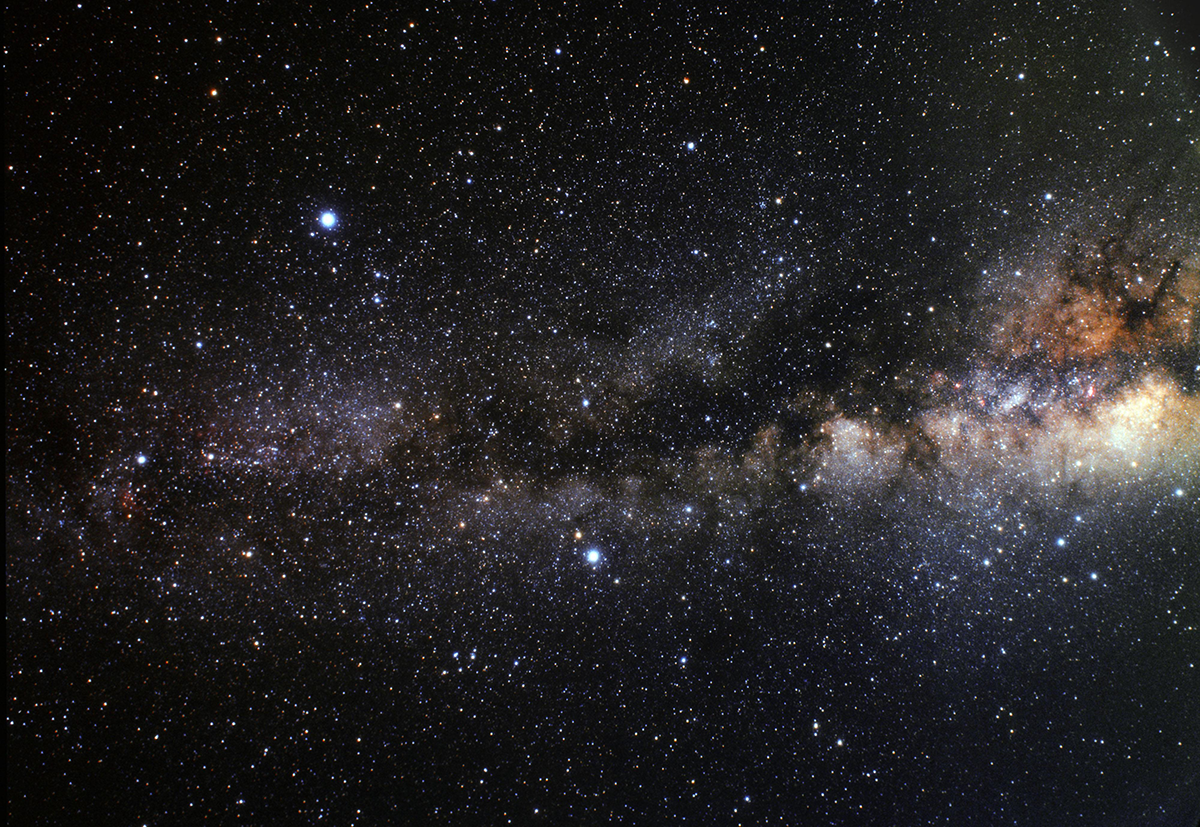 For centuries, modern science has been shrinking the gap between humans and the rest of the universe, from Isaac Newton showing that one set of laws applies equally to falling apples and orbiting moons to Carl Sagan intoning that "we are made of star stuff" — that the atoms of our bodies were literally forged in the nuclear furnaces of other stars.

Even in that context, Gregory Matloff's ideas are shocking. The veteran physicist at New York City College of Technology recently published a paper arguing that humans may be like the rest of the universe in substance and in spirit. A "proto-consciousness field" could extend through all of space, he argues. Stars may be thinking entities that deliberately control their paths. Put more bluntly, the entire cosmos may be self-aware.

The notion of a conscious universe sounds more like the stuff of late night TV than academic journals. Called by its formal academic name, though, "panpsychism" turns out to have prominent supporters in a variety of fields. New York University philosopher and cognitive scientist David Chalmers is a proponent. So too, in different ways, are neuroscientist Christof Koch of the Allen Institute for Brain Science, and British physicist Sir Roger Penrose, renowned for his work on gravity and black holes. The bottom line, Matloff argues, is that panpsychism is too important to ignore.

"It’s all very speculative, but it's something we can check and either validate or falsify," he says.

Three decades ago, Penrose introduced a key element of panpsychism with his theory that consciousness is rooted in the statistical rules of quantum physics as they apply in the microscopic spaces between neurons in the brain.

In 2006, German physicist Bernard Haisch, known both for his studies of active stars and his openness to unorthodox science, took Penrose's idea a big step further. Haisch proposed that the quantum fields that permeate all of empty space (the so-called "quantum vacuum") produce and transmit consciousness, which then emerges in any sufficiently complex system with energy flowing through it. And not just a brain, but potentially any physical structure. Intrigued, Matloff wondered if there was a way to take these squishy arguments and put them to an observational test.

One of the hallmarks of life is its ability to adjust its behavior in response to stimulus. Matloff began searching for astronomical objects that unexpectedly exhibit this behavior. Recently, he zeroed in on a little-studied anomaly in stellar motion known as Paranego's Discontinuity. On average, cooler stars orbit our galaxy more quickly than do hotter ones. Most astronomers attribute the effect to interactions between stars and gas clouds throughout the galaxy. Matloff considered a different explanation. He noted that the anomaly appears in stars that are cool enough to have molecules in their atmospheres, which greatly increases their chemical complexity.

Matloff noted further that some stars appear to emit jets that point in only one direction, an unbalanced process that could cause a star to alter its motion. He wondered: could this actually be a willful process? Is there any way to tell?

If Paranego's Discontinuity is caused by specific conditions within the galaxy, it should vary from location to location. But if it is something intrinsic to the stars — as consciousness would be — it should be the same everywhere. Data from existing stellar catalogs seems to support the latter view, Matloff claims. Detailed results from the Gaia star-mapping space telescope, due in 2018, will provide a more stringent test.

Matloff is under no illusion that his colleagues will be convinced, but he remains upbeat: "Shouldn't we at least be checking? Maybe we can move panpsychism from philosophy to observational astrophysics."

Mind Out of Matter

While Matloff looks out to the stars to verify panpsychism, Christof Koch looks at humans. In his view, the existence of widespread, ubiquitous consciousness is strongly tied to scientists' current understanding of the neurological origins of the mind.

"The only dominant theory we have of consciousness says that it is associated with complexity — with a system's ability to act upon its own state and determine its own fate," Koch says. "Theory states that it could go down to very simple systems. In principle, some purely physical systems that are not biological or organic may also be conscious."

Koch is inspired by integrated information theory, a hot topic among modern neuroscientists, which holds that consciousness is defined by the ability of a system to be influenced by its previous state and to influence its next state.

The human brain is just an extreme example of that process, Koch explains: "We are more complex, we have more self-awareness — well, some of us do — but other systems have awareness, too. We may share this property of experience, and that is what consciousness is: the ability to experience anything, from the most mundane to the most refined religious experience."

Like Matloff, Koch and his colleagues are actively engaged in experimental tests of these ideas. One approach is to study brain-impaired patients to see if their information responses align with biological measures of their consciousness. Another approach, further off, is to wire the brains of two mice together and see how the integrated consciousness of the animals changes as the amount of information flowing between them is increased. At some point, according to integrated information theory, the two should merge into a single, larger information system. Eventually, it should be possible to run such experiments with humans, wiring their brains together to see if a new type of consciousness emerges.

Despite their seeming similarities, Koch is dubious of Matloff's volitional stars. What is distinctive about living things, according to his theory, is not that they are alive but that they are complex. Although the sun is vastly bigger than a bacterium, from a mathematical perspective it is also vastly simpler. Koch allows that a star may have an internal life that allows it to “feel,” but whatever that feeling is, it is much less than the feeling of being an E. coli.

On the other hand, "even systems that we don't consider animate could have a little bit of consciousness," Koch says. "It is part and parcel of the physical." From this perspective, the universe may not exactly be thinking, but it still has an internal experience intimately tied to our own.

Which brings us to Roger Penrose and his theories linking consciousness and quantum mechanics. He does not overtly identify himself as a panpsychist, but his argument that self-awareness and free will begin with quantum events in the brain inevitably links our minds with the cosmos. Penrose sums up this connection beautifully in his opus "The Road to Reality:"

Despite his towering stature as a physicist, Penrose has encountered resistance to his theory of consciousness. Oddly, his colleagues have been more accepting of the exotic, cosmic-consciousness implications of quantum mechanics. Ever since the 1920s, physicists have puzzled over the strangely privileged role of the observer in quantum theory. A particle exists in a fuzzy state of uncertainty…but only until it is observed. As soon as someone looks at it and takes its measurements, the particle seems to collapse into a definite location.

The late physicist John Wheeler concluded that the apparent oddity of quantum mechanics was built on an even grander and odder truth: that the universe as a whole festers in a state of uncertainty and snaps into clear, actual being when observed by a conscious being — that is, us.

"We are participators in bringing into being not only the near and here but the far away and long ago," Wheeler said in 2006. He calls his interpretation the "participatory anthropic principle." If he is correct, the universe is conscious, but in almost the opposite of the way that Matloff pictures it: only through the acts of conscious minds does it truly exist at all.

It is hard to imagine how a scientist could put the participatory anthropic principle to an empirical test. There are no stars to monitor, and no brains to measure, to understand whether reality depends on the presence of consciousness. Even if it cannot be proven, the participatory anthropic principle extends the unifying agenda of modern science, powerfully evoking the sense of connectedness that Albert Einstein called the cosmic religious feeling.

"In my view, it is the most important function of art and science to awaken this feeling and keep it alive in those who are receptive to it," Einstein wrote in a 1930 New York Times editorial. Explorers like Matloff are routinely dismissed as fringe thinkers, but it is hard to think of any greater expression of that feeling than continuing the quest to find out if our human minds are just tiny components of a much greater cosmic brain.

Read This Next
Bangs and Bounces
Scientists Say Stuff Might Have Been Happening Before the Big Bang
Space Lumps
Scientists Say We May Be Extremely Wrong About the Universe
Heady Stuff
Experiment Suggests That Consciousness May Be Rooted in Quantum Physics
Massive Gravity
New Theory Could Solve Universe’s Biggest Paradox
Consciousness Everywhere
Professor: Electrons and Quarks May Experience Consciousness
More on Hard Science
Warped Tour
Thursday on futurism
Professor Believes Door to Warp Drive May Lie With Ethylene Glycol
Sky Bursts
Thursday on the byte
Astronomers Intrigued by 25 Mysterious Repeating Radio Signals From Deep Space
Tractor Beam
Jan 26 on the byte
Scientists Build Working Tractor Beam, Although It's Comically Tiny
READ MORE STORIES ABOUT / Hard Science
Keep up.
Subscribe to our daily newsletter to keep in touch with the subjects shaping our future.
+Social+Newsletter
TopicsAbout UsContact Us
Copyright ©, Camden Media Inc All Rights Reserved. See our User Agreement, Privacy Policy and Data Use Policy. The material on this site may not be reproduced, distributed, transmitted, cached or otherwise used, except with prior written permission of Futurism. Articles may contain affiliate links which enable us to share in the revenue of any purchases made.
Fonts by Typekit and Monotype.