CME: The Storm of the Century 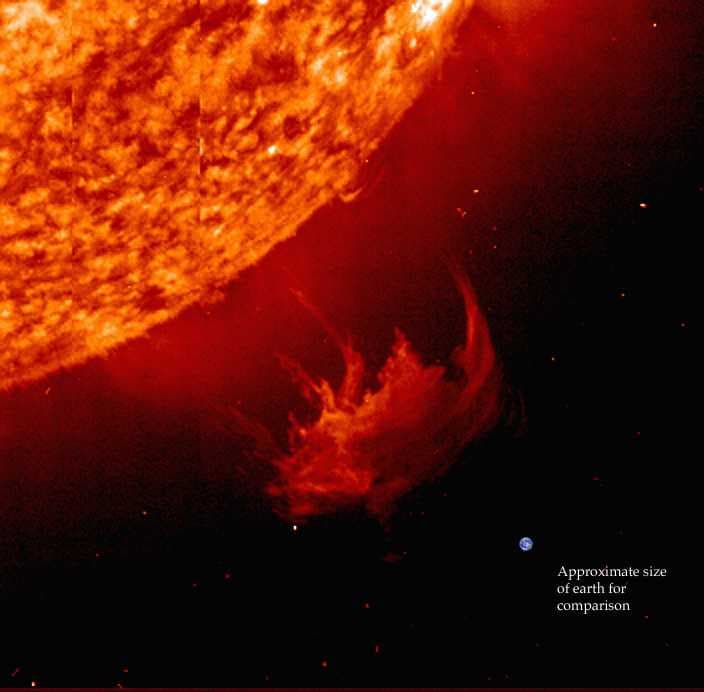 Coronal Mass Ejections (CME) and Solar Flares are marvelous (and utterly terrifying) solar events. Generally referred to as “solar storms,” either one of these phenomena can release energy that is equivalent to over a million 100-megaton hydrogen bombs. If you look at the attached image above, you'll get a pretty good idea of what this means. A single bomb of this magnitude would give you third degree burns if you were anywhere within 40 miles of the detonation site, while anything within 20 miles would be completely obliterated (64km and 32km, respectively). A million of these bombs could destroy some 20 million miles of Earth.

In short, these solar events are amazingly powerful and destructive. Fortunately, the Earth has a few defenses...

Solar storms generally occur as a result of variations in the Sun’s magnetic field lines. When these field lines fluctuate, the matter they contain is released out into the solar system (and by “released,” I mean that it explodes from the Sun in a hellish firestorm). These super-heated particles blast from the Sun at speeds exceeding 600 miles per second (1,000 kms), and they can contain over 200 billion pounds of material (100 billion kilograms). Which is bad news for anything that is in the path of this explosion.

But as I said, fortunately, the Earth has a built in defense system. Our own magnetic field (our magnetosphere) protects us from the majority of these deadly solar events. In fact, most of us have seen this shield hard at work in the form of aurora borealis (the Northern Lights) and aurora australis (the Southern Lights). But of course, our atmosphere isn’t impenetrable. In 1859 there was a particularly bad solar storm known as "the Carrington Event." Telegraph operators were electrocuted, wires snapped and caught fire, and auroras occurred around the globe (they were seen in Colorado, the Caribbean etc.).

Unfortunately, a similar storm would have a much more devastating impact on today’s society. For starters, the density of gasses in the atmosphere would increase, adding additional drag to any objects in low-Earth orbit (including the International Space Station). This additional drag would cause low-orbiting objects to slow and potentially plummet to the Earth. Of course, the International Space Station and various satellites wouldn’t be the only technology impacted; radios would be useless, mobile phone towers would fail, and planes would be unable to navigate.

But the most damning outcome of a strong solar storm? A freezing of the global economy… Electronic currents would enter power lines, destroying generators and transformers. The resulting power grid failures would not only leave many in the dark for weeks, or even months, but bring electronic banking and the stock market to a halt, shut down the internet, and effectively cripple all of modern society.

Another terrifying thought? Anyone who is not under the protection of the Earth’s life-giving magnetic field would likely perish. For example, an astronaut standing on the moon during the strongest of solar flares would instantly die from radiation poisoning. Theoretically, such an event could cause significant damage to the DNA of individuals in high-altitude air flights (leading to cancer and, eventually, to death). In order to counteract the risks of the radiation, NASA recently launched two twin probes to explore Earth's Van Allen Belts.

Thankfully, such solar events are rare. We haven’t had a seriously threatening storm approach us in nearly 154 years (the last was the 1859 event). And we don’t have any Moon colonies (so no worries there). Moreover, we have a number of spacecraft and satellites that constantly have their eyes on the skies, meticulously watching the Sun for any particularly noteworthy flare-ups. The Solar Terrestrial Relations Observatory, for example, is capable of providing stereoscopic images of 90% of the Sun’s surface. This should, at the very least, give us some advance warning of any particularly violent solar activity, which would give us time to shut off any vital electronic devices, and thereby protect their fragile systems.

So, with any luck, you’ll get your iPhone off in time.

Read This Next
Futurism
A Massive Solar Storm Just Hit Mars, Causing a Global Aurora and Doubling Radiation Levels
Futurism
The Sun Just Erupted The Biggest Solar Flare in 12 Years And It Has Affected Earth
Futurism
Giant Solar Storms May Have Fueled the Evolution of Life on Earth
More on Off World
Exoplanet Dance
Yesterday on the byte
Scientist Releases Amazing Video of Exoplanets Orbiting Distant Star
Space Junk News
Yesterday on the byte
Two Large Chunks of Space Debris Just Almost Collided in an Epic Disaster
Mars Drop
Yesterday on the byte
NASA's Mars Rover Perseverance Just Dropped Off Its Last Sample
READ MORE STORIES ABOUT / Off World
Keep up.
Subscribe to our daily newsletter to keep in touch with the subjects shaping our future.
+Social+Newsletter
TopicsAbout UsContact Us
Copyright ©, Camden Media Inc All Rights Reserved. See our User Agreement, Privacy Policy and Data Use Policy. The material on this site may not be reproduced, distributed, transmitted, cached or otherwise used, except with prior written permission of Futurism. Articles may contain affiliate links which enable us to share in the revenue of any purchases made.
Fonts by Typekit and Monotype.