This wouldn't bode well for any life on the surface. 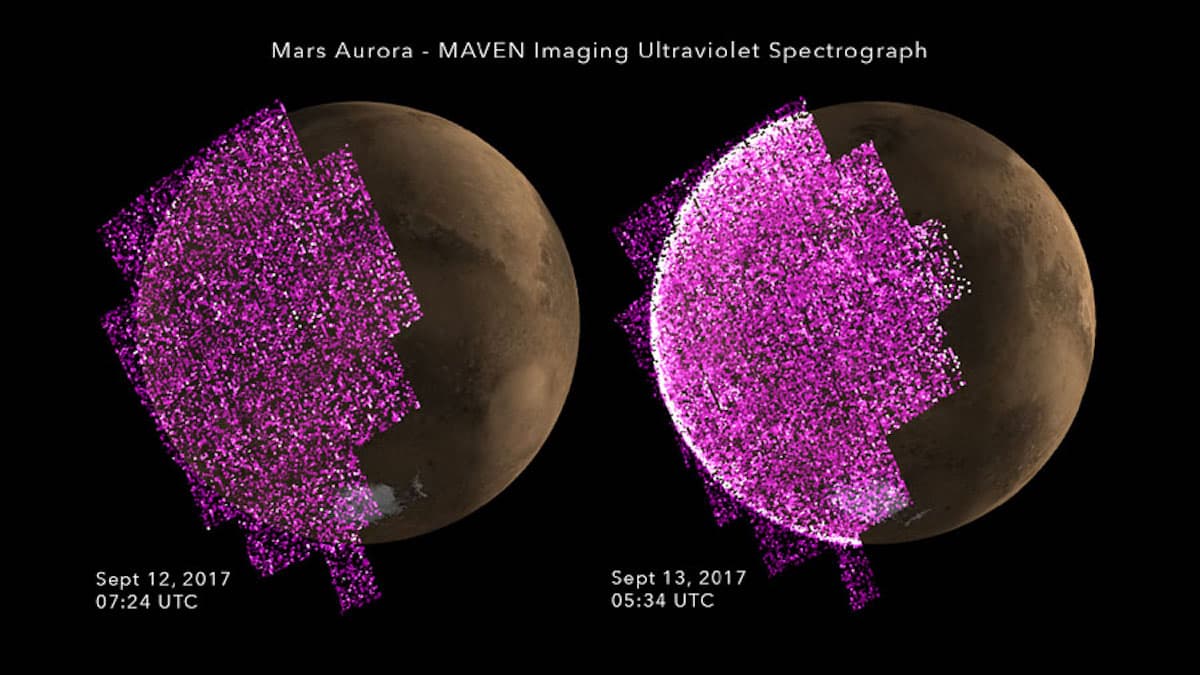 Image by NASA/Univ. of Colorado

On September 11th, the Sun surprised scientists monitoring the red planet by hitting Mars with an unexpected solar storm. The storm produced an aurora on Mars 25 times brighter than any other observed by the Mars Atmosphere and Volatile Evolution (MAVEN) orbiter, which has been studying the planets' atmosphere since 2014.

The featured image above, taken by the Imaging Ultraviolet Spectrograph on NASA's MAVEN orbiter, shows the intensity of ultraviolet light on Mars' night side before (left) and during (right) the solar storm.

The storm also doubled the highest radiation levels measured on Mars' surface, by the Curiosity rover's Radiation Assessment Detector (RAD), since it landed in 2012. Though our planet was on the opposite side of the Sun, radiation was detectable from Earth—a testament to the storm's power.

"This is exactly the type of event both missions were designed to study, and it's the biggest we've seen on the surface so far," said Don Hassler, RAD Principal Investigator, in a NASA press release. "It will improve our understanding of how such solar events affect the Martian environment, from the top of the atmosphere all the way down to the surface."

Less Than Quiet on the Solar Front

This storm was particularly surprising because it came at a time when the Sun was expected to be relatively quiet.

The sun's magnetic poles flip roughly every eleven years, and the period between this swap—known as the solar cycle— is characterized by relatively predictable levels of sunspot activity. Sunspots visually mark where powerful magnetic fields are erupting from the sun, producing the solar flares and coronal mass ejections that cause solar storms. The sun is currently approaching its solar minimum, when few to no sunspots are expected.

"The current solar cycle has been an odd one, with less activity than usual during the peak, and now we have this large event as we're approaching solar minimum," said Sonal Jain of the University of Colorado Boulder's, a member of the instrument team for MAVEN's Imaging Ultraviolet Spectrograph, in the NASA release.

Tracking how events like this impact the Martian surface is key to gauging the habitability of the red planet, both for its own potential life and for future human explorers—a significant focus for NASA. Data from RAD will help researchers develop safety shielding for astronauts on the planet's surface. According to Hassler, astronauts on Mars would definitely have needed shelter during a storm of this magnitude.

"To protect our astronauts on Mars in the future, we need to continue to provide this type of space weather monitoring there," he said.