Meet The Bipedal Droid That Can Run

Now, we've invented robots that can move with the same dexterity and pace as human joggers. 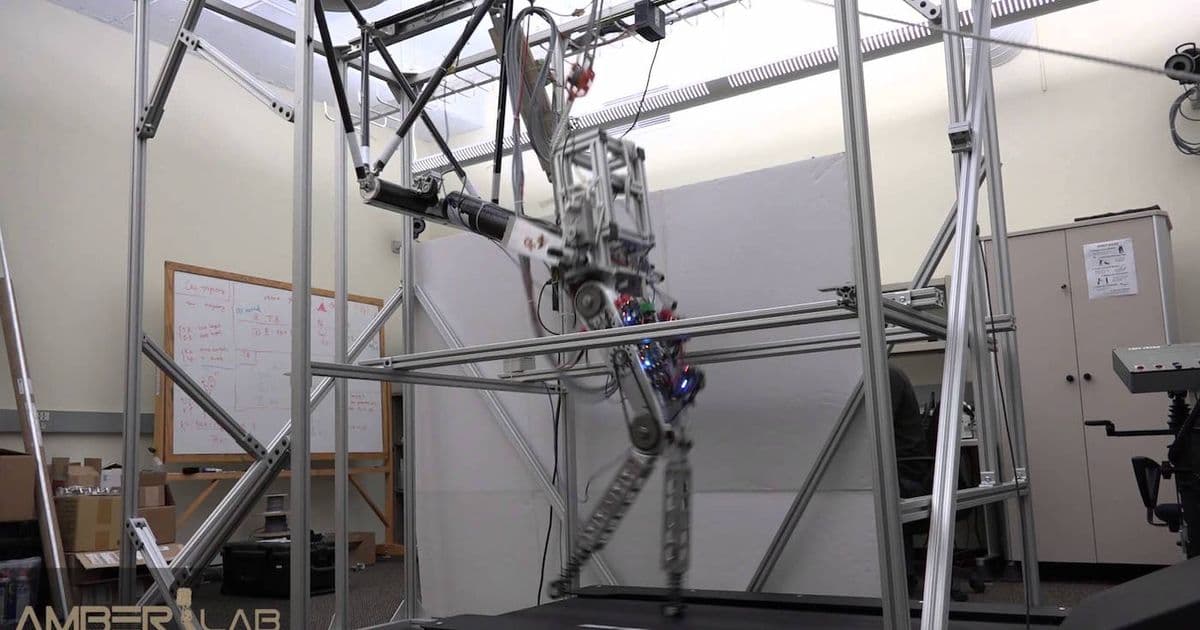 After the world managed to create robots on hind legs that could easily walk around in a test lab, it was only a matter of time before researchers found a way to make these robots run; which is exactly what AMBER (Advanced Mechanical Bipedal Experimental Robotics) Lab did.

The lab, based at the Georgia Institute of Technology, just introduced the Durus-2D—a bipedal droid that very closely mimics the human’s natural style and stride while jogging.

While it can move at a pretty brisk pace, it’s still not as fast as the MABEL. But if you check out the video below, the movement of the Durus-2D is the closest by far robotics engineers have come to copying the natural movement of humans running.

AMBER Lab has been known to focus their expertise on creating “human-inspired” robots—specifically mimicking the motion of walking and running in robots.

To achieve this, the team collects data from human subjects and studies the kind of restrictions that muscles and bones have on movement. These factors go into the development of robotic limbs and controllers that effectively replicates it.

Their achievement is not only significant in the field of robotics—this could also prove to be valuable in the development of prosthetics. Robotic limbs that offer the same dexterity and functionality of human limbs could one day provide amputees the ability to regain full mobility.

Read This Next
Brands We Love
Robots Are Already Driving and Painting, Now They're Directing Films Too
Futurism
There's Now A Computer Designed Specifically for Programming Intelligent Robots
Futurism
The Military Wants to Make AI That Mimics the Human Brain. Experts Know There’s a Better Way.
Futurism
Bring This Robot to a Disco, and It'll Dance With You
Futurism
Saudi Arabia Made a Robot a Citizen. Now, She's Calling For Women's Rights.
More on Artificial Intelligence
Not a Scientist, ...
Yesterday on the byte
Largest Publisher of Scientific Journals Slaps Down on Scientists Listing ChatGPT as Coauthor
ChatGPA
Yesterday on the byte
Mom Encourages Teen to Turn in Essay Generated With ChatGPT
AI Asshole
Jan 27 on the byte
BuzzFeed Columnist Tells CEO to "Get F*cked" for Move to AI Content
READ MORE STORIES ABOUT / Artificial Intelligence
Keep up.
Subscribe to our daily newsletter to keep in touch with the subjects shaping our future.
+Social+Newsletter
TopicsAbout UsContact Us
Copyright ©, Camden Media Inc All Rights Reserved. See our User Agreement, Privacy Policy and Data Use Policy. The material on this site may not be reproduced, distributed, transmitted, cached or otherwise used, except with prior written permission of Futurism. Articles may contain affiliate links which enable us to share in the revenue of any purchases made.
Fonts by Typekit and Monotype.