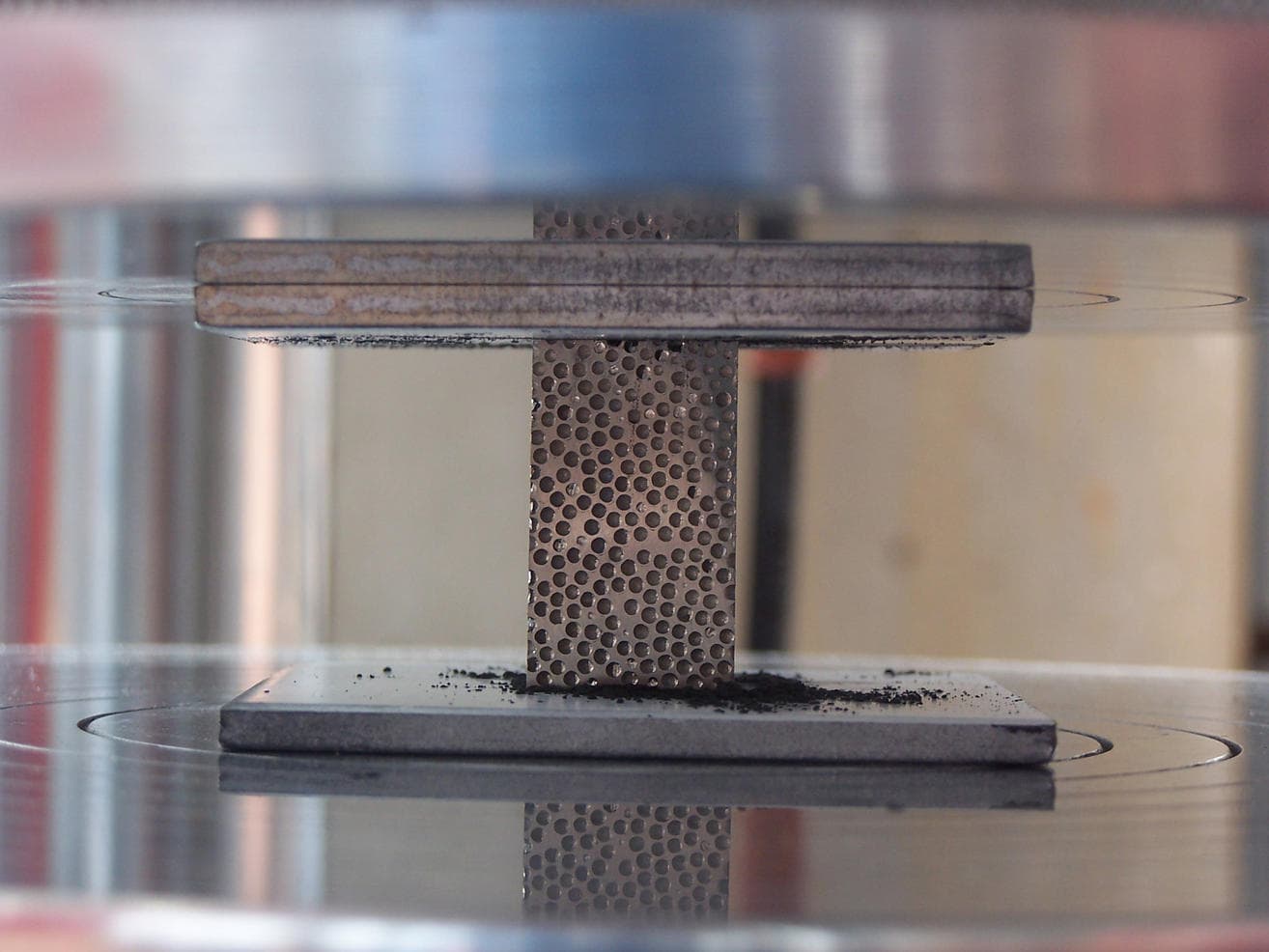 A new material that is lighter than metal plating but exceptional tough has just been created by researchers. The composite metal foam (CMF) is so tough that it can reduce bullets into dust upon impact.

The material was created by a North Carolina State University engineer by the name of Afsaneh Rabiei, who has been working on variations of CMFs for a few years. Her most recent research shows that the foam is able to absorb 60 to 70 percent of the total kinetic energy of a projectile—similar to the M2 demonstrated in the video—while still meeting the depth of penetration and backplate deformation rules required by bullet-proof armor.

"The indentation on the back of the CMF after the bullet strike was less than 8 mm in the latest tests," Rabiei says. Check out a demonstration of the material in action in the video below.

This may mean that our military could soon be suiting up in armor that’s significantly more durable and also significantly lighter. In addition, Rabiei’s research shows that the CMF is effective against X-rays, gamma rays, and neutron radiation. Earlier this year, Rabiei also demonstrated how efficiently it handles heat and fire.

Beyond military applications, the CMF could be applied to construct secure nuclear waste facilities, or used for spacecrafts or even medical equipment.

The material is also non-toxic, which means it’s easier to manufacture and recycle.

Read This Next
Futurism
The Answer to Nuclear Waste Storage and Transportation Could Be Metal Foam
More on Robots & Machines
From the Dept. of...
12:00 AM on futurism
The Best Wireless Mouse of 2023
Balloon Boy
Yesterday on the byte
Other Chinese Balloons Apparently Flew Over America, But Nobody Noticed Them
From the Dept. of...
Yesterday on futurism
The Best Desks of 2023
READ MORE STORIES ABOUT / Robots & Machines
Keep up.
Subscribe to our daily newsletter to keep in touch with the subjects shaping our future.
+Social+Newsletter
TopicsAbout UsContact Us
Copyright ©, Camden Media Inc All Rights Reserved. See our User Agreement, Privacy Policy and Data Use Policy. The material on this site may not be reproduced, distributed, transmitted, cached or otherwise used, except with prior written permission of Futurism. Articles may contain affiliate links which enable us to share in the revenue of any purchases made.
Fonts by Typekit and Monotype.