Can Nanobubbles Save the Planet from Environmental Destruction? 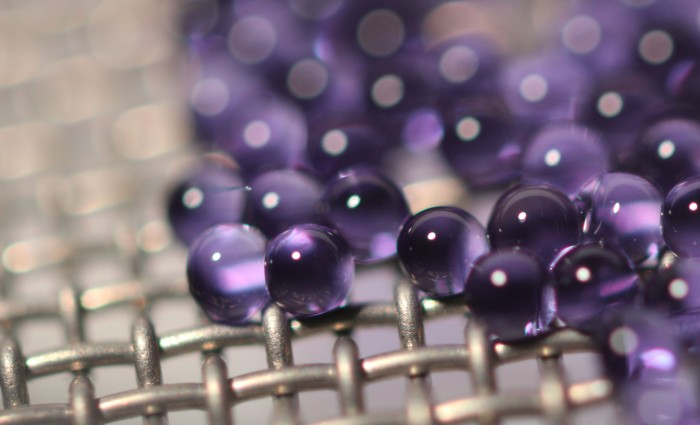 New high-tech nano bubbles filled with an age-old kitchen standby may be the next weapon in the battle against out-of-control carbon dioxide emissions from power plants.

The project, from Lawrence Livermore National Laboratory, combines an old time-tested idea with a new high-tech idea: put baking soda in tiny, permeable nanobubbles, and then use the bubbles to absorb emissions from power plants directly at the source, before they can enter the atmosphere and contribute to the anthropogenic CO2 emissions currently sending the environment into a self-sustaining warming cycle.

With mankind’s voracious appetite for energy still not sated by carbon-neutral generating technologies, it’s a sure bet that combustible hydrocarbons will continue as a mainstay of electrical and mechanical energy generation for the foreseeable future. The carbon dioxide produced by the combustion of these energy sources remains a significant threat to the stability of the global environment as we know it, however. Capturing that gas before it enters the atmosphere and contributes to the phenomena of global warming is a high priority for both industry and climate scientists.

Power plants remain the largest wholesale emitters of anthropogenic CO2. The idea of sequestering their emissions at the source is not a new one, nor is using baking soda as the absorbing agent. Baking soda has long been known to absorb CO2, and commercial sequestration solutions make use of it in systems which tap into exhaust flues and pull the CO2 out of the exhaust before it comes out the top of the stack.

But those systems are cumbersome. One prototype device is the size of two fifty-foot trailers, requiring quite a lot of engineering work to re-route exhaust fumes in order to be of any use. Removing and replacing the baking soda in such a system can be correspondingly difficult.

The Lawrence Livermore team’s solution deals with those problems and several others by using the nanobubble approach. The bubbles are tiny and can be packaged and replaced in arbitrary volumes, whatever is easiest for handling. Because the bubbles, made of a synthetic polymer, are permeable to gas but not to liquids, they function with no chance of messy spills. Rather than raw baking soda, they are filled with an aqueous sodium carbonate solution.

The solution has another benefit—it is pH reactive and changes color, from purple to yellow, when the bubble is saturated with CO2, so it’s obvious when the bubbles need to be refreshed.

The tiny size of the spheres also improves the efficiency of the solution. The exposed surface area of the bubbles provides considerably more area for the CO2 to interface with the baking soda for the absorbent reaction to occur. A like volume of baking soda in a more conventional filter system cannot remove as much CO2 as the nanobubbles can over a given period.

The nanobubble system is not yet in use in any plants and may be too cumbersome for other CO2 producers — the volume required, for example, means that it is unlikely to be adapted to anything as small as the common automobile. But the flexible nature of the bubbles may yet result in unexpected venues where they could be used to help sequester CO2 emissions.

Read This Next
Sundowned
Mexico Bans Startup From Future Solar Geoengineering Experiments
Knew It All Along
Exxon Scientists Knew About Global Warming for Decades While Company Denied It
Solar Slay
Solar Powered Machine Turns CO2 and Waste Plastic Into Valuable Fuel
Dim Sun for Breakfast
Startup Says It's Started Releasing Chemical Into Atmosphere to Dim Sun
Hidden City
NYC's Greenery Eats Up All the CO2 From Its Cars, Trucks and Buses "And Then Some"
More on Earth & Energy
Sowloon Walled City
4:57 PM on the byte
China Growing Pigs in Huge High Rise Buildings
Crust Punk
3:02 PM on the byte
Scientists Discover Molten Hell Zone Beneath Earth's Tectonic Plates
His Power
Yesterday on the byte
Scientists Develop Compound That Kills So Efficiently They Named It After Keanu Reeves
READ MORE STORIES ABOUT / Earth & Energy
Keep up.
Subscribe to our daily newsletter to keep in touch with the subjects shaping our future.
+Social+Newsletter
TopicsAbout UsContact Us
Copyright ©, Camden Media Inc All Rights Reserved. See our User Agreement, Privacy Policy and Data Use Policy. The material on this site may not be reproduced, distributed, transmitted, cached or otherwise used, except with prior written permission of Futurism. Articles may contain affiliate links which enable us to share in the revenue of any purchases made.
Fonts by Typekit and Monotype.