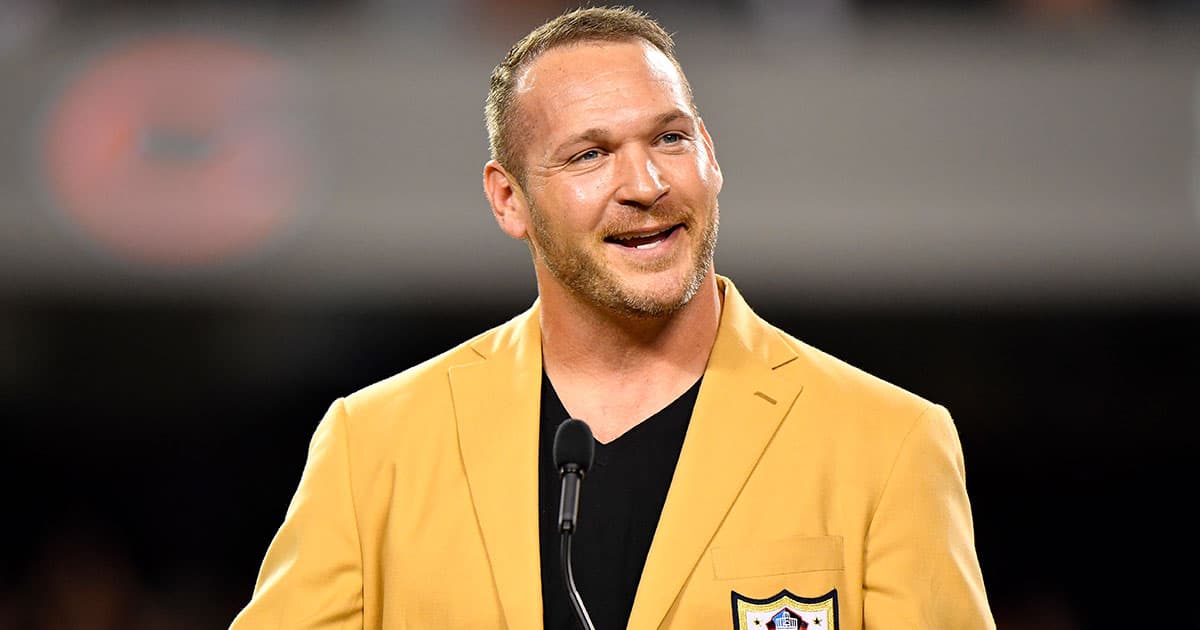 In a tabloidy saga with the body mod drama of a William Gibson novel, a formerly-bald ex-pro football player is suing a Texas hair transplant company for using his image and story in a blog post without his permission.

As the Chicago Sun-Times reports, former Chicago Bears linebacker Brian Urlacher is suing Houston Hair Transplant Center for publishing a blog post about him and his hair recovery journey without his consent.

While Urlacher is not at all affiliated with the Houston company, he is the face of Restore Hair, an Illinois-based hair transplant company that has tons of advertising featuring the Hall of Famer as its spokesperson.

In a blog post clunkily-titled "Brian Urlacher Hair Transplant?" Houston Hair Transplant did not, the suit alleges, do enough to mention that the celebrated ex-linebacker had received hair loss treatment elsewhere.

The post, which the Sun-Times appears to have reviewed, only briefly mentions the actual company Urlacher is affiliated with when claiming, in classic junior copywriter-speak, that he was "ready to take on the world once more as a spokesperson for Restore."

According to the suit, mentioning his treatment without sufficiently pointing out that it occurred at a different clinic "misleadingly" and "deceptively led potential patients to believe that Mr. Urlacher had an affiliation with, or received restoration treatment from, Defendant Houston Hair."

Indeed, Urlacher's face has for years graced Restore Hair's infamous Chicagoland billboards alongside puns like "O'Hair Hairport," a take on the O'Hare International Airport, and "Hairlacher," a cheap reference to his name.

Don’t get this joke 😢 pic.twitter.com/wkXBROYDHJ

The Chicago Tribune notes in its write-up of the lawsuit that this isn't the first time Urlacher has sued a company over this issue. Back in 2017, he filed suit against a Boca Raton, Florida-based hair loss clinic for doing almost the exact same thing as he's now alleging with Houston Hair — using his name and likeness in a search engine-optimized splash page to attract customers to its site without his permission. That case was ultimately settled in 2019 for a meager $3,500, which was a far cry from the $100,000 he initially sought in damages.

In his newer case against the Houston company, Urlacher is seeking $50,000 in damages plus court costs, attorney fees, and "punitive damages" for the allegedly unlawful misuse of his name and likeness, which the suit claims have "damaged [him] economically and non-economically through lost profits, loss of reputation, loss of business, dilution of name."

Eyebrow-raisingly, the litigious hair transplant spokesman made headlines last year for claiming, completely out of pocket, that some of his fellow NFL stars who've joined 2022's gigantic concussion suit against the NFL were lying about their brain injuries.

Specifically, Urlacher was referencing a then-recent settlement between the NFL and a whopping 4,500 former players over head injuries and concussions they suffered during their time on the field. In his comments, he claimed that his fellow ex-players were only saying they suffered from chronic traumatic encephalopathy (CTE), a brain disease resulting from repeated concussions and blows to the head that has gained increasing attention over the last decade because so many football players have been found to have it postmortem.

"If they do have it, I feel for them," he told Barstool Sports' Bussin' With The Boys football podcast, "but there’s guys who say they have it just so they can be in the fucking lawsuit."

As Deadspin noted in its takedown of Urlacher's commentary, CTE can only be diagnosed postmortem, so there's no way that 4,500 living men could claim to have it.

And anyway, it's somewhat ripe for a guy who's now twice sued hair loss clinics for the type of SEO blog posts every business in the country now utilizes to say that other people are doing anything for "the fucking lawsuit."

Read This Next
Brands We Love
Laser Cap Therapy Helps You Regrow Hair From the Comfort of Home
Brands We Love
Laser Cap Therapy Might Just Be the Baldness Treatment We've Been Waiting For
More on Sci-Fi Visions
What is Happening
Wednesday on the byte
Elon Musk Sets His Twitter Account to Private
From the Dept. of...
Monday on futurism
The Best Humidifiers of 2023
Human v. Giraffe
Jan 24 on the byte
Chaotic Italian Fashion Line Baffles Facial Recognition Software
READ MORE STORIES ABOUT / Sci-Fi Visions
Keep up.
Subscribe to our daily newsletter to keep in touch with the subjects shaping our future.
+Social+Newsletter
TopicsAbout UsContact Us
Copyright ©, Camden Media Inc All Rights Reserved. See our User Agreement, Privacy Policy and Data Use Policy. The material on this site may not be reproduced, distributed, transmitted, cached or otherwise used, except with prior written permission of Futurism. Articles may contain affiliate links which enable us to share in the revenue of any purchases made.
Fonts by Typekit and Monotype.