You won't believe your eyes and ears. 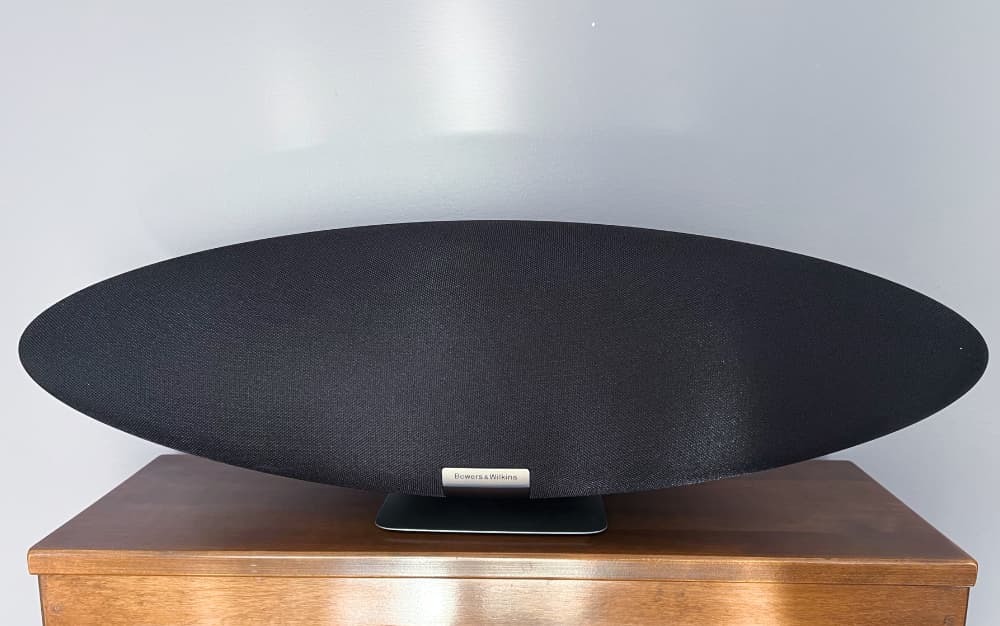 The return of Bowers & Wilkins' Zeppelin speaker is a welcome development for every music listener who cares about audio quality, but has transitioned away from physical media like CDs and vinyl to music streaming. The speaker, which is on sale for $100 at $699, manages to combine the hardware and performance of a traditional home audio system, which typically features a standalone amplifier and stereo speakers, with the convenience of a modern smart speaker. In this arena, the Zeppelin is unmatched.

The Latest Speaker in a Long Legacy

The thought of spending hundreds of dollars on a single speaker might sound absurd in a world where you can get a pretty good sounding Bluetooth speaker for under $100, but the current-generation Zeppelin is the latest in a line of high-end speakers that was launched in 2007. That original model was released at the height of classic iPod's popularity, with a physical dock that allowed you to charge the dedicated music player.

Bowers & Wilkins' Zeppelin speaker line was released in the mid 2000s, but it’s an extension of the British audio company’s legacy. Since it was founded in Worthing, West Sussex in 1966, Bowers & Wilkins has been driven by the desire to build and sell audio gear aimed at music listeners who demand to hear their music in the highest quality possible.

The original Zeppelin allowed you to play music from your local music library without any cables. We're well into the music streaming age, where millions of tracks are available in a couple of taps. The way many of us listen to music may have changed, but the Bowers & Wilkins' strategy has remained the same: Create the coolest-looking, best-sounding speaker for music lovers.

To that end, the company has updated the Zeppelin three times over the past fifteen years, and the fourth-generation model we've been testing is its biggest leap forward. Not only does this speaker accommodate all the needs of a modern music listener, from compatibility with every wireless streaming standard to support for Amazon's Alexa, it's exceeded our expectations in almost every way.

One thing Bowers & Wilkins didn't change is the Zeppelin’s iconic look, which has only been refined slightly each time a new version is released. This is a big speaker, with a width of 26 inches, and a height and depth of seven inches. If you're looking for a Bluetooth speaker for your beach bag, or one that can be subtly placed on a bookshelf, look elsewhere.

The Zeppelin, perched on its curved, metal stand, looks distinctive and demands attention. If you've never seen the Zeppelin before, it's easy to write off its elongated shape as a cheap gimmick, but it serves a very important purpose. The speaker's extreme width allowed Bowers & Wilkins to place its drivers (the part of a speaker and headphone that produce sound) far away from one another. Each side of the Zeppelin features one 1-inch tweeter and a 3.5-inch midrange woofer, with a six-inch subwoofer in the middle of the speaker.

This multi-driver design serves two important purposes. First, it allows the speaker to direct sounds that fall in a specific frequency range to the driver that can play it the most clearly.  High frequencies (known as treble) get routed to the tweeters, midrange frequencies (referred to as mids) get sent through the woofer, and low frequencies (aka bass) come out through the middle woofer. This sounds technical, but the end result is clearer sound, and the ability to hear different instruments more clearly. While listening to rock music, we could easily distinguish the bass from the crashing of cymbals, vocals, and guitar. Lower-end speakers typically have one or two drivers that handle sounds from the entire frequency range, which is why your music might sound muffled.

The second reason for the Zeppelin’s design is that the tweeter and woofer on either side of the speaker are far enough apart that you can hear music in stereo. Many wireless speakers only play music in mono, or are so small that it's hard to hear the distinct sounds that would traditionally come from the left and right speaker in a traditional home stereo system. Music mixed in stereo — from Pink Floyd's album “Dark Side of the Moon” to Billy Cadden's single “One in Control” — sounds better than they would on a mono speaker because it's the way the artist intended you to hear it. Ironically, we've noticed that some newer music is mixed closer to mono to accommodate the fact that a lot of people listen to music on a single Bluetooth or smart speaker.

All of this technical information may sound a little complicated if you're unfamiliar with audio gear, but all you have to know is that Bowers & Wilkins handled the hard lifting, you just need to hit the play button on your phone, tablet, or computer.  You'll immediately notice the difference between playing music on the Zeppelin and using a typical speaker. The Zeppelin even stands out when compared to other higher-end speakers because Bowers & Wilkins designed its drivers and amplifier itself.

Other companies — the ones who make those $100 Bluetooth speakers — typically use off-the-shelf parts, or a mix of components that’re designed in-house and available off-the-shelf. When designing the parts that make up its current-generation Zeppelin, Bowers & Wilkins company took some inspiration from its traditional loudspeakers, which are used by professional recording engineers at studios like Abbey Road in London.

During our testing, we kept coming back to the idea that it's better to look at the Bowers & Wilkins Zeppelin as a modern, compact home stereo system rather than a jumbo Bluetooth speaker.

Set-Up Only Takes a Few Minutes

The Zeppelin may look imposing, but Bowers & Wilkins did a great job making it easy to configure. The first step is to find a place to fit the Zeppelin given its width. For the best results, we recommend placing it on a dedicated side table, or the top of a small bookcase. You’ll want to pick a place where the speaker is out in the open to avoid the issue of sound reverberating off the top and sides of an enclosed area, like the middle shelves of a media console.

To get the most out of the speaker, you'll want to download Bowers & Wilkins' "Music" app, which is available on iOS and Android. The app will automatically detect the Zeppelin once it's plugged in, and you'll be able to name the speaker, connect it to your WiFi network, enable its Amazon Alexa functionality, and stream music to it from your streaming app of choice. All of this should only take five or so minutes, though in our experience the setup process took a couple of tries to work. This may be due to the fact that we were running a beta version of iOS at the time.

If you want to bypass all of that, you can hit the speaker's "multifunction" button (a big circular button on top of the speaker with three lines in the middle), to switch it over to Bluetooth mode. This setting requires no app to set up. We recommend setting the Zeppelin up using Bowers & Wilkins' app to see whether its features are worthwhile to you. If you primarily use Apple devices to stream music, running through Bowers & Wilkins' standard setup procedure will also enable AirPlay 2, which allows you to stream higher-resolution music to the Zeppelin.

Once it's set up, you can link the Zeppelin to your Amazon account using the Alexa app on your phone or tablet. Doing so will allow you to use Alexa to play music from your streaming service of choice totally hands free. If you're familiar with Amazon's Alexa, and want to easily create an on-the-fly playlist while preparing a meal or cleaning, it's a good option to have.

No Smart Speaker on the Market Can Match the Zeppelin's Sound

It's safe to say that the latest version of Bowers & Wilkins' Zeppelin speaker is the best wireless speaker we've ever tested, and it gave many powered speakers and multi-component stereo systems a run for their money. In the audio world, it's easy to get tripped up in gear, and worrying about whether the speakers you're using are the best match for your amplifier. Eventually, you find yourself getting selective about the speaker cables and power plugs you use (guilty), and these nagging feelings can interrupt your enjoyment of the music.

Instead of worrying about any of that, we were able to queue up the music we wanted from our streaming service of choice — or local music library — and start playing songs. It may seem hyperbolic, but in our hours of music listening, the Zeppelin never let us down. Its consistency of producing well-balanced sound, where no instrument or element of a song overpowered another one, was almost alarming. We never had the familiar experience of a song's bass drowning out its vocal track, or cymbals getting drowned out by a kick drum. The Zeppelin won't be able to fix a song that's been mixed poorly, but it isn't going to mess up the sound of a good song, either.

We listened to music from several genres when testing out the Zeppelin, and found ourselves unable to stump it. The clanging sound of the honkey-tonk style piano in the intro of The Band's “We Can Talk” rang through clearly underneath the song's whirling organ. The iconic saxophone line that drives John Coltrane's “My Favorite Things” sounded sharp on top of the bed created by the drum, bass, and piano tracks. Lorde's ethereal voice was astonishingly clear on “Solar Power,” but never drowned out the harmony vocals beneath it.

There are dozens of additional examples we could give of the Zeppelin knocking it out of the park where audio quality is concerned, but we'll end by citing the bass drum that kicks off Courtney Barnett's “Elevator Operator.” Its powerful, consistent beat punctuates the syllables of the words Barnett is singing. Each sound enhances the other, making the complete song better than the sum of its parts.

One funny quirk we found during our testing is that the Zeppelin can get loud. We rarely moved our digital volume knob past 50 percent, so you should have no problem turning it way past 11 if you plan on using this speaker in a big room. This feature makes it equally good when listening to music while doing loud tasks like vacuuming or cooking, and while hosting big parties.

We could go on and on, but the bottom line is that anyone will be able to appreciate how good their favorite music sounds coming from the Zeppelin. For most folks, it'll be the last speaker they ever need, which makes it well worth the investment if you love music but don't have the space or patience for a traditional stereo system. Just don't be surprised if you hear "wow, what's that?" when guests see it for the first time.