Stuff for simple folk making their way through the galaxy. 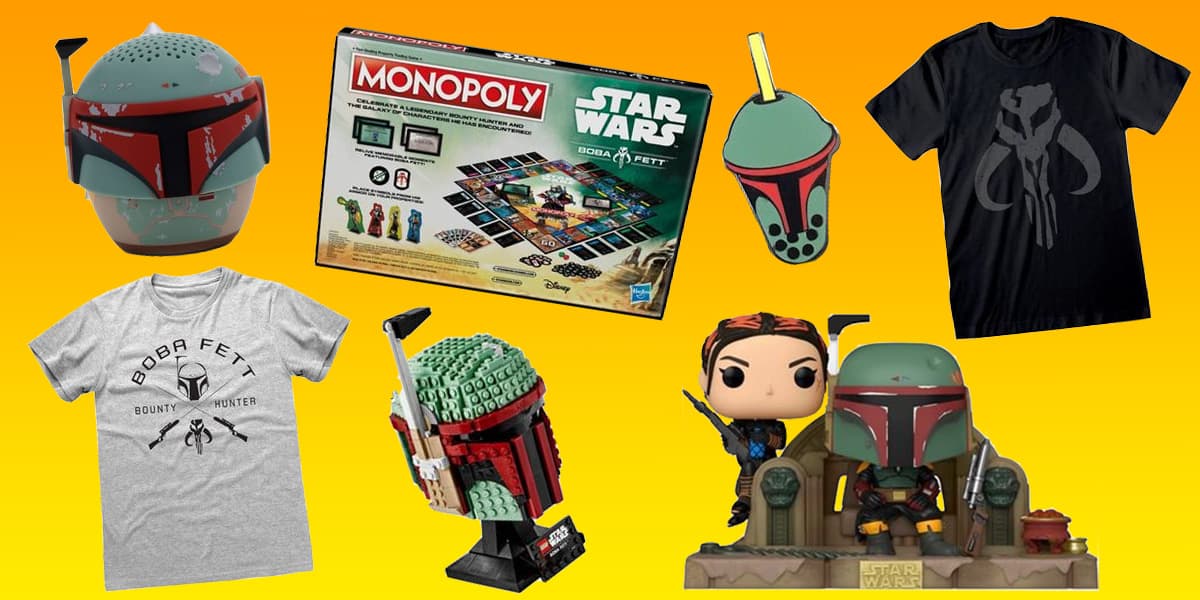 Though “The Book of Boba Fett” may have ended (and the possibility of a season two is still in the hints and whispers stage), our love for the cloned bounty hunter remains as eternal as a sarlacc’s digestive process. Sharp enough for your wardrobe and deserving of a spot on your shelf, this is the Boba Fett swag that marks you as a true fan of Mos Espa’s new resident Rancor rider.

If you prefer Boba Fett back in his more fearsome pre-sarlacc days, grab this heathered tee. Fett’s signature EE-3 carbine blaster is crossed below his helmet and just above his Mandalorian sigil, in a design that’s subtle and understated — as any good bounty hunter should be.

Key Selling Point: Cool enough to show off and challenging enough to absorb you for an hour or two.

There was a time when displaying either LEGO or “Star Wars” paraphernalia could be deemed unprofessional. Now if senior management doesn’t have a bit of whimsy behind them on their Zoom screens, they’re probably too rigid to work with. This office-caliber LEGO kit is all grown up, with 625 pieces that form an 8.5-inch tall Boba Fett helmet, complete with a museum-style name plate.

Bitty Boomers have managed to do two things remarkably well: give boring speaker casings a pop-culture makeover, and crank out room-filling sound from a two-inch package. This Boba Fett speaker fits in the palm of your hand, connects via Bluetooth to your phone, and runs for four hours on one charge. Pair it with a Mando Bitty Boomer for Beskar-clad stereo sound.

Naturally you’ve already got the POP Boba Fett vinyl figure. So now you need this. With the unfathomably badass Fennec Shand by his side, this POP Moments scene commemorates Boba Fett taking the throne at Mos Espa. These guys look ready to take all comers, from Hutts to spice traffickers, and will look even better on your shelf.

Is Boba Fett a Mandalorian? His father was a foundling — just like Din Djarin, who’s arguably the most famous of the Mandalorians with his eponymous show and all. Plus Boba’s got that hard-won, nigh-on-indestructible Mandalorian armor. So we say yes. This gray-on-black mythosaur skull is the sigil emblazoned on Fett’s armor throughout “The Book of Boba Fett.”

Key Selling Point: The classic board game with an immersive “Star Wars” skin.

With the same game-play as Monopoly, the Boba Fett version of the classic game swaps out properties like Marvin Gardens and Baltic Avenue for characters like Lando Calrissian and Han Solo. Skull and wheat sigils replace houses and hotels, and instead of a thimble or a race car, player tokens are four different Boba Fetts.

Key Selling Point: Get it? Boba? Like the tea? Strictly for Fett fans with a sense of humor.

What if you like both Boba Fett and boba tea? Then you are a person of good taste who should be rewarded with an enamel pin for your many-points-of-flair jean vest. This one is made by collectible pin maker, Yesterdays, and measures 1.25 inches tall.

Even before we found out this dude survived a freaking sarlacc pit, we knew Boba Fett was a star. With just four lines in the original trilogy, the masked bounty hunter was better than fifty Bib Fortunas — something he demonstrated handily when he was finally given his own show. Forget the days when the best gift you could hand a Boba Fett fan was a cracked action figure off eBay — this stuff is worthy of the baddest bounty hunter in a galaxy far, far away.