"Anyone can place an opening bid." 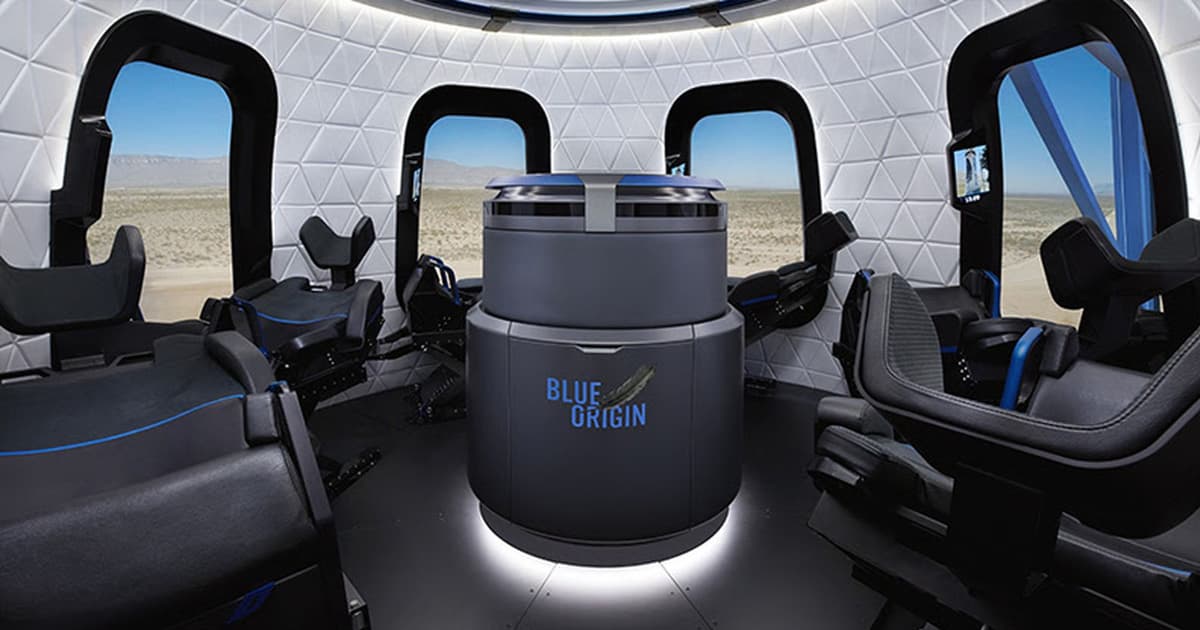 Jeff Bezos-led space company Blue Origin is opening up a seat on its first crewed flight to space — and it's putting the ticket up for auction.

"Anyone can place an opening bid," reads a tweet.

The ride of a lifetime is scheduled for July 20 on board the company's New Shepard spacecraft.

"This seat will change how you see the world," reads the company's website.

The capsule is designed with commercial space travel in mind, with the ability to fly up to six passengers to just above 100 kilometers (62 miles), which is the internationally agreed upon edge of space, also known as the Karman line.

To be clear, that's far short of the altitude of the International Space Station, which circles the Earth at well over 200 miles.

Any future passenger will have to be at least 18, of average height, and weigh between 110 and 223 pounds, according to Blue Origin's terms and conditions.

Passengers will be able to watch the Earth disappear below out of six observation windows, each of which are nearly three times as tall as the ones on a Boeing 747 airliner.

Blue Origin is putting safety up front, claiming on its website that it has had "15 successful consecutive missions [of the New Shepard and its redundant safety systems] including three successful escape tests, showing the crew escape system can activate safely in any phase of flight."

The news comes after SpaceX made a big splash, announcing that three civilian passengers — including a former Space Camp counselor and a community college professor — will accompany billionaire and pilot Jared Isaacman on a free trip around the Earth inside its tried-and-true Crew Dragon spacecraft some time this fall.

Relations between Blue Origin and SpaceX recently turned sour after Blue Origin filed a protest, contesting NASA's decision to award SpaceX — rather than Blue Origin — a $2.9 billion contract to develop a lunar landing system for the agency's Artemis program.

NASA told SpaceX to cease all work on the lander contract over the weekend following Blue Origin and fellow contractor Dynetics' protest filings.

In light of all that, Blue Origin has a lot to prove, especially now that it's inviting the public to go on a presumably expensive trip to space. The company has yet to launch any astronauts on board its New Shepard spacecraft.

Whether it will be ready to ship astronauts, let alone members of the public, into space by July is anybody's guess.

Read This Next
Shot Well
Head of NASA Relieved to Hear Elon Musk Isn't REALLY Running SpaceX
Pale Blue Shat
William Shatner Explains Why His Trip to Space Was Horrible
Overview Effect
William Shatner Says His Space Trip Left Him With a Feeling of Terrible Grief
Makeover Scene
Space Tourist Says He's Thinking About Flying SpaceX Craft Up to Fix Hubble
Grain of Salt
There's a Huge Problem With Elon Musk's Promise to Bring Starlink to Iran
More on Off World
Drama Bomb
10:21 PM on the byte
European Space Agency Halts Plans to Send Astronauts to Chinese Space Station
Futurism
8:59 PM on the byte
Asteroid Mining Startup About to Launch First Mission
Carry On, Wayward...
3:02 PM on the byte
NASA Says Lucy Spacecraft Will Forge Ahead With Busted Solar Array
READ MORE STORIES ABOUT / Off World
Keep up.
Subscribe to our daily newsletter to keep in touch with the subjects shaping our future.
+Social+Newsletter
TopicsAbout UsContact Us
Copyright ©, Camden Media Inc All Rights Reserved. See our User Agreement, Privacy Policy and Data Use Policy. The material on this site may not be reproduced, distributed, transmitted, cached or otherwise used, except with prior written permission of Futurism. Articles may contain affiliate links which enable us to share in the revenue of any purchases made.
Fonts by Typekit and Monotype.