This Company Is Using Science, Not Gimmicks, To Help Fight Hangovers 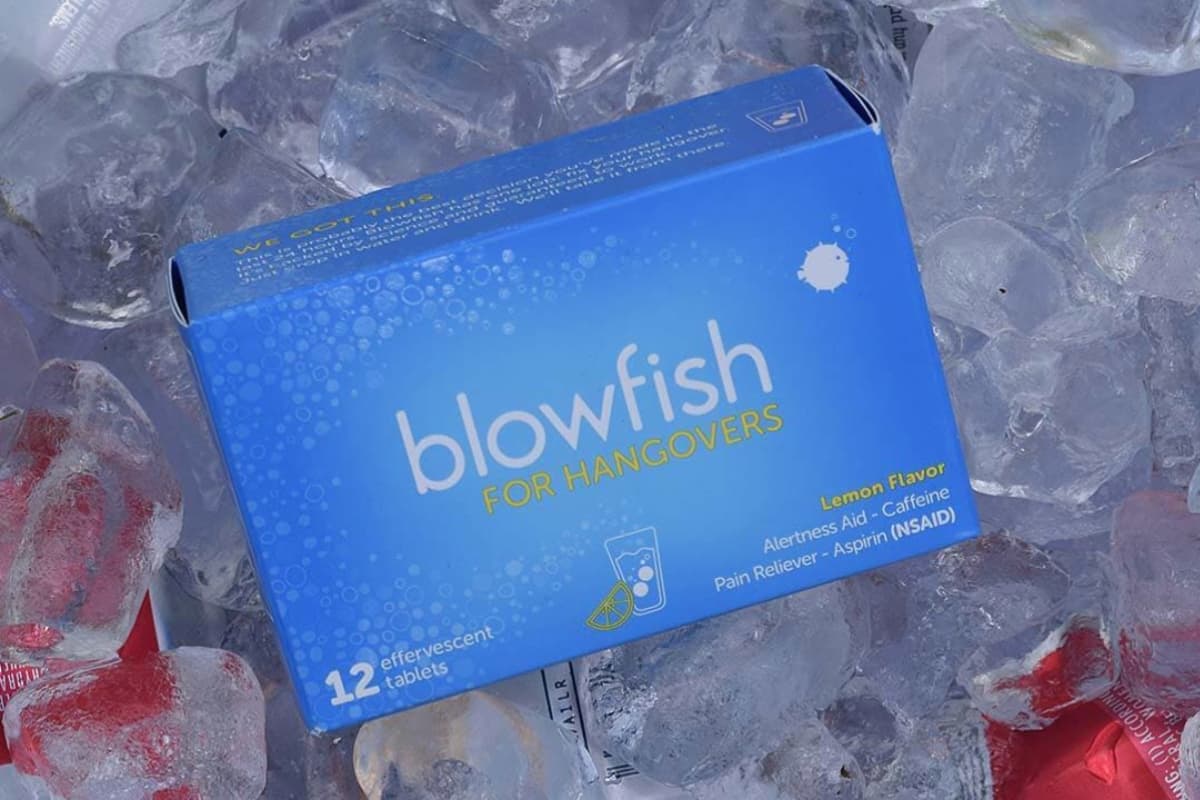 If you've found that the intensity of your hangovers increased at least 10 fold last year, you're not alone. In fact, Americans across the board are tossing back more drinks than usual.  New research out of RAND, a nonprofit research organization, found that alcohol consumption in the United States rose 14-percent amidst pandemic shutdowns. And as you probably already know, more drinking means more hangovers. But what if you didn't have to lose an entire day just because you opted for an additional glass of wine the night before. That's where Blowfish For Hangovers comes in. It's the hangover cure that's guaranteed to stop the insanity associated with overindulging.

With Blowfish, you can finally say goodbye to the head pounding, nausea, and cold sweats associated with hangovers. It's the morning hangover remedy that actually works. Its FDA-recognized formula is backed by science,and is guaranteed to make you feel better in about 15 minutes.

All you have to do is drop two Blowfish tablets in water and drink. It uses real medicine specifically formulated to relieve hangover symptoms. The effervescent tablets rapidly dose your debilitated body with 1000mg of aspirin as well as 120mg of pharmaceutical caffeine. Alone, these ingredients would not neutralize your debilitating hangover in record time. But Blowfish's effervescent delivery method accelerates the time it takes to be absorbed into the bloodstream, and takes care of that pounding headache in a flash.

How This Hangover Cure Works

The reason it feels like you spent the night sleeping with your head in a vice grip is inflammation. That's because as your body breaks down alcohol, it triggers inflammatory reactions that make you swear you'll never drink again. The maximum strength aspirin in Blowfish eases the pain, and the effervescent delivery method gets it into your system fast.

Blowfish revolutionizes the morning after by putting an end to your hangover in less time than it takes to make pour-over coffee. Speaking of coffee, you should probably avoid it even though you need the caffeine boost. It's only going to make your stomach hurt. Thankfully, Blowfish neutralizes this problem by giving your body the caffeine it needs in a way that's gentle on your stomach.

Studies suggest that hangovers are the result of alcohol withdrawal. Not only that, but alcohol causes brain activity to shut down because it's a depressant. And drinking alcohol – especially in excess – is linked to getting poor sleep quality, even if you pass out early. When combined, these side effects leave you feeling upset and exhausted. It's like your brain just won't work. Luckily, the caffeine in Blowfish will stimulate your central nervous system to quickly re-hydrate, alleviate pain, and give your brain the slight kick in the ass it needs to conquer the world... or at least remember your work email password.

It feels like there's never enough water after a night of heavy drinking. That's because alcohol suppresses a hormone called Vasopressin, which lhis leads to all those trips to the bathroom and your morning after dehydration. But Blowfish is designed to replenish this hormone so you get the hydration you desperately need to conquer the day.

Most importantly, the Blowfish team believes in the effectiveness of their hangover treatment so much that they have a hangover-free guarantee. If you don’t love it, Blowfish will give you your money back. So why wait? Head over to their site today and try it for yourself. You've got nothing to lose except those awful, debilitating hangovers.

Read This Next
Futurism
Trying to Quit Drinking? This Implant Will Snitch If You Fall off the Wagon
Futurism
Forget the Breathalyzer: Scientists Develop Temporary Tattoo Measuring Alcohol Intake
Futurism
Stem Cell Breakthrough Regrows Livers Beyond Self-Repair
More on Enhanced Humans
Brain-Computer Im...
Jan 3 on the byte
Neuralink Cofounder Says New Company's Eye Implant Could Be "Ultimate" VR Tech
Eyes Have It
12. 30. 22 on futurism
Meet the Neuralink Cofounder Who Left and Started a Competitor That's Now Rapidly Catching Up
Butcher Shop
12. 6. 22 on futurism
Neuralink Employees Admit Company Has Killed 1,500 Animals So Far
READ MORE STORIES ABOUT / Enhanced Humans
Keep up.
Subscribe to our daily newsletter to keep in touch with the subjects shaping our future.
+Social+Newsletter
TopicsAbout UsContact Us
Copyright ©, Camden Media Inc All Rights Reserved. See our User Agreement, Privacy Policy and Data Use Policy. The material on this site may not be reproduced, distributed, transmitted, cached or otherwise used, except with prior written permission of Futurism. Articles may contain affiliate links which enable us to share in the revenue of any purchases made.
Fonts by Typekit and Monotype.