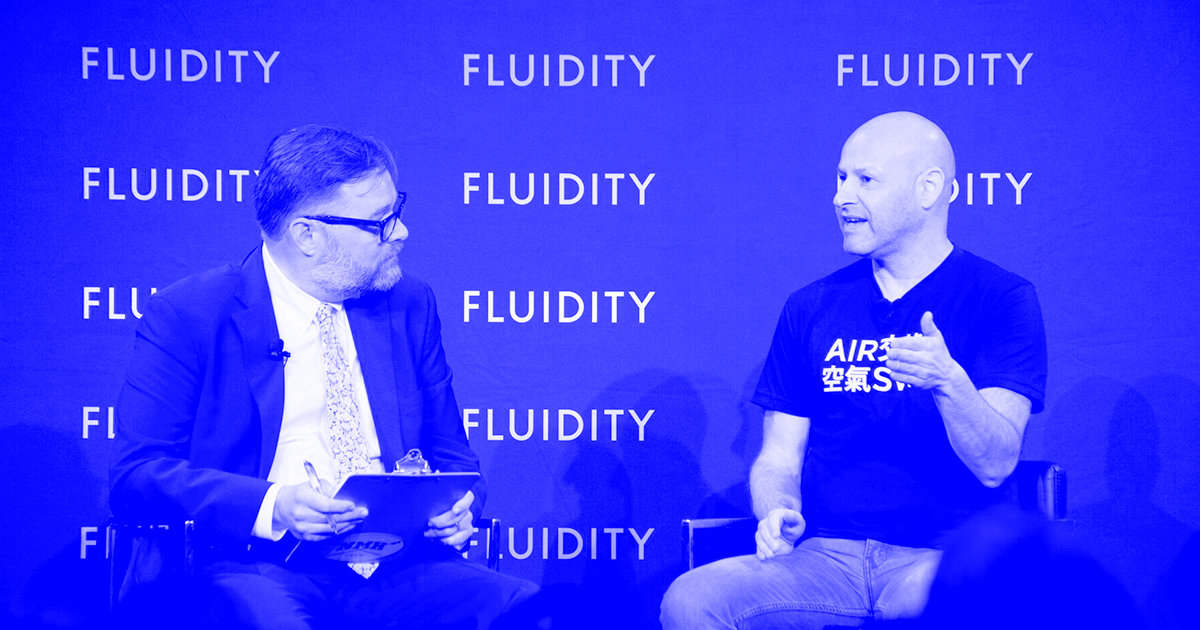 Blockchain Week NYC kicked off this year at Fluidity, drawing a sold-out crowd for the second straight year to Weylin in Brooklyn to discuss a wide range of topics including institutional adoption of blockchain technology, decentralized finance, public vs. private blockchains, regulatory policy, and emerging non-financial use cases. Here are five major themes from Fluidity 2019.

Speakers from several leading Wall Street institutions explained how their firms are actively building, testing, and implementing blockchain-based applications and infrastructure to streamline their business models.  Emmanuel Aidoo, Head of Digital Asset Markets at Credit Suisse, noted that relative to other recent technologies (such as cloud computing), adoption of blockchain technology among the broader banking industry is advancing at a comparatively rapid pace.  Other speakers were similarly optimistic about institutional adoption in the near-to-medium term, particularly as the infrastructure necessary to connect with legacy systems continues to be built.

In blockchain technology, DeFi focuses on building a financial system that is more open and accessible than the status quo.  At Fluidity, attendees saw several new products and use cases that are gaining traction.  These include decentralized trading (AirSwap, Uniswap, Kyber Network), crypto “staking” or lending (Dharma, Staked), decentralized banking systems (MakerDAO), and blockchain-based Smart Mortgages (Fluidity), which will be introduced this summer.  On the latter, Todd Lippiatt of Factora noted: “our methodology provides better pricing that is determined solely by the intrinsic credit of the [mortgage] transaction, as opposed to external factors like domestic central bank governance policies and political trade winds.”

Michael Oved, Fluidity (On a Chain)

There is an ongoing debate in the blockchain space as to whether certain types of mainstream commerce (including securities transactions) should be transacted on public or private blockchains.  Joseph Lubin, co-founder of Ethereum, offered a persuasive answer for why open, public blockchain networks will eventually win out, arguing that the scale of innovation, interoperability, and standardization possible in open networks cannot be matched by any particular private blockchain.  While some presenters (including Will LaMartin from Symbiont) noted that privacy is critical to securities transactions, others asserted that the mechanisms necessary to protect private data on public blockchains are already being developed, rendering this a temporary concern.

Leading thinkers and policymakers offered their perspectives on the state of policy and regulation in crypto, including Caitlin Long (Co-Founder of the Wyoming Blockchain Coalition), Clyde Vanel (New York State Assemblyman), and Pat Berarducci (Head of Digital Assets at ConsenSys). Long made a compelling argument that Wyoming has taken several positive steps to facilitate innovation in the space, while New York remains difficult for building crypto-based businesses.

Debate: Is New York or Wyoming a Better Place to Do Business?

Blockchain is gaining traction in a broad spectrum of other use cases, including the increasing transparency in entertainment production, enabling new forms of engagement in online gaming and acting as a safeguard of property and other rights in emerging economies.  An impressive range of speakers including Richard Haass (President of the Council on Foreign Relations), Barrie Osborne (Executive Producer of the Matrix and the Lord of the Rings), and Fred Chesnais (Chairman and CEO of Atari Group) offered their views on how blockchain can add value in these unique areas.

As this year’s Blockchain Week NYC wraps up, we look forward to the continued development and adoption of the work and themes on display at Fluidity 2019.

The preceding communication has been paid for by Fluidity. This communication is for informational purposes only and does not constitute an offer or solicitation to sell shares or securities in Fluidity or any related or associated company. None of the information presented herein is intended to form the basis for any investment decision, and no specific recommendations are intended. This communication does not constitute investment advice or solicitation for investment. Futurism expressly disclaims any and all responsibility for any direct or consequential loss or damage of any kind whatsoever arising directly or indirectly from: (i) reliance on any information contained herein, (ii) any error, omission or inaccuracy in any such information or (iii) any action resulting from such information.

Read This Next
Market Madness
Bill Gates Says He's Quite Concerned About the Global Economy
Sad!
Melania Trump Accused of Secretly Buying Her Own NFT to Avoid Disgrace
Greenwashing
World Wildlife Foundation Cancels NFT Project After Critics Point Out That It Was Actually a Huge Polluter
Stoking the Fire
Gaming Exec Says His Customers Are Idiots For Not Understanding How Great NFTs Are
Art Flop
Independent Artists Say NFTs Are the Bane of Their Existence
More on Future Society
Vatican Vagrant
Yesterday on the byte
Elon Musk Takes Flabbergastingly Awkwardly Picture With the Pope
Movie Magic
Yesterday on the byte
Robots Now Delivering VR Porn Headsets to the Terminally Lonely
McDoom
Yesterday on the byte
Sorry Folks, That Photo of Doom Running on a McDonald's Kiosk Is Fake
READ MORE STORIES ABOUT / Future Society
Keep up.
Subscribe to our daily newsletter to keep in touch with the subjects shaping our future.
+Social+Newsletter
TopicsAbout UsContact Us
Copyright ©, Camden Media Inc All Rights Reserved. See our User Agreement, Privacy Policy and Data Use Policy. The material on this site may not be reproduced, distributed, transmitted, cached or otherwise used, except with prior written permission of Futurism. Fonts by Typekit and Monotype.