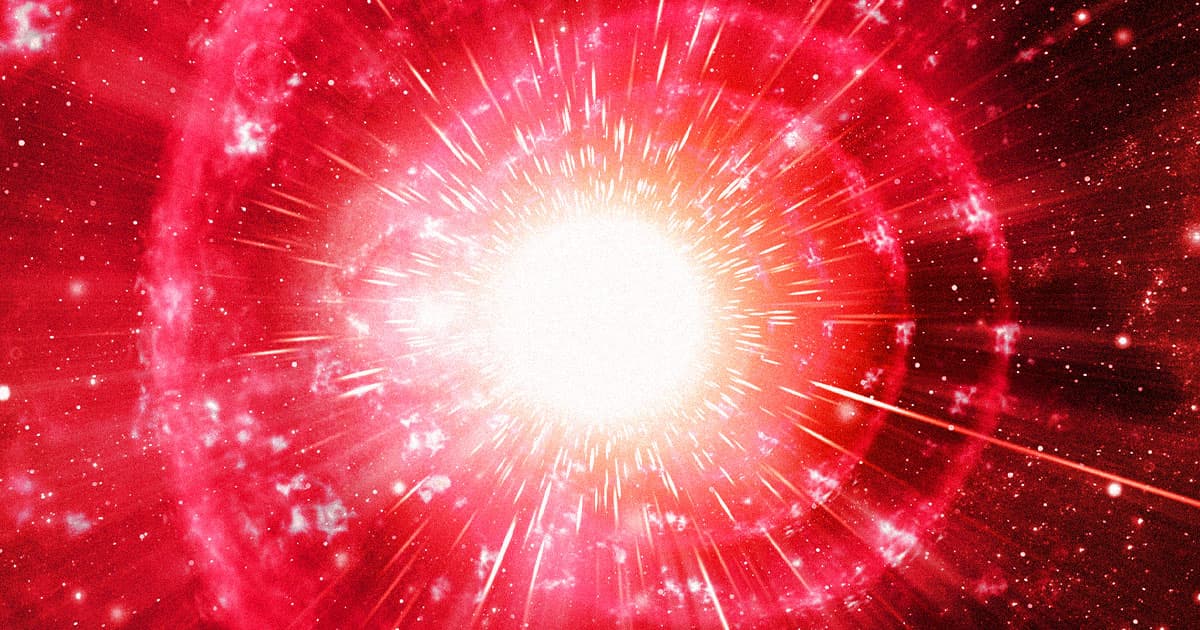 Scientists believe an immense explosion they detected was the result of a black hole colliding with a star.

The 50-second blast, dubbed GRB 211211A, released copious gamma rays in a galaxy about 1.1 billion light-years away.

The event was picked up by NASA's Fermi Gamma-ray Space Telescope back in December 2021, and quickly caught the attention of the researchers.

At almost a minute, the explosion lasted far longer than other previously detected gamma ray bursts, indicating an event of staggering proportions.

"We don't expect mergers to last more than about two seconds," Benjamin Gompertz, co-author of a new study published in the journal Nature and assistant professor at the University of Birmingham, told the BBC. "Somehow, this one powered a jet for almost a full minute."

For decades, astrophysicists have believed that only the collapse of massive stars could lead to extended gamma-ray bursts like this one.

This particular burst, however, could force them to reevaluate what we know about these rare and violent events.

For one, the light released by GRB 211211A featured far more infrared light than expected.

But researchers also have a tantalizing theory as to what may have caused the explosion.

According to the team led by Northwestern University astrophysicist Jillian Rastinejad, the light may have been the result of a kilonova, an event triggered by a neutron star colliding with a black hole.

"This event looks unlike anything else we have seen before from a long gamma-ray burst," said Rastinejad in a statement. "Its gamma rays resemble those of bursts produced by the collapse of massive stars."

The observation could upend some long-held beliefs in the field of astrophysics.

"When I entered the field 15 years ago, it was set in stone that long gamma-ray bursts come from massive star collapses," said Northwestern’s Wen-fai Fong, a senior author of the study, in the statement. "This unexpected finding not only represents a major shift in our understanding, but also excitingly opens up a new window for discovery."

Spotting kilonovae is exceedingly difficult as they fade very quickly. Fortunately, they have a unique signature, as they "are powered by the radioactive decay of some of the heaviest elements in the universe," according to Rastinejad.

But with the observation of GRB 211211A, astronomers could widen the scope of their search.

"Now, we know we can also use some long gamma-ray bursts to look for more kilonovae," Rastinejad explained in the statement.

"With the JWST, we could have obtained a spectrum of the kilonova," Rastinejad said. "Those spectral lines provide direct evidence that you have detected the heaviest elements."

More on black hole collisions: Scientists Spotted Something That Appeared to Be Moving 7 Times the Speed of Light

Read This Next
Sun Screen
The James Webb Space Telescope Is Officially Unfurling Its Mighty Sunshield
Mad Libs
A Philosopher Is Trying to Figure out What Black Holes Really Are
The Great Evil
A Jupiter-Sized Black Hole is Floating Around The Milky Way
From the Ashes
Astronomers May Have Just Spotted the Birth of a Black Hole
Bright Spot
Newly Spotted Quasar Is 600 Trillion Times Brighter Than the Sun
More on Off World
Take Cover
Yesterday on the byte
Space Startup Blows Up Another Giant Inflatable Space Station Module
Rock Blast
Yesterday on the byte
Scientists Say There's an Upside to Those Rocks That Keep Bludgeoning the James Webb
Meathead Theory
Yesterday on the byte
Professor Receives Insane Email Claiming "Biological" Green Comet Is Giving Off "Meat Smoke"
READ MORE STORIES ABOUT / Off World
Keep up.
Subscribe to our daily newsletter to keep in touch with the subjects shaping our future.
+Social+Newsletter
TopicsAbout UsContact Us
Copyright ©, Camden Media Inc All Rights Reserved. See our User Agreement, Privacy Policy and Data Use Policy. The material on this site may not be reproduced, distributed, transmitted, cached or otherwise used, except with prior written permission of Futurism. Articles may contain affiliate links which enable us to share in the revenue of any purchases made.
Fonts by Typekit and Monotype.