Bill Nye: "I Predict No One Is Going To Want To Settle on Mars"

Plus a science fact he wishes more people knew. 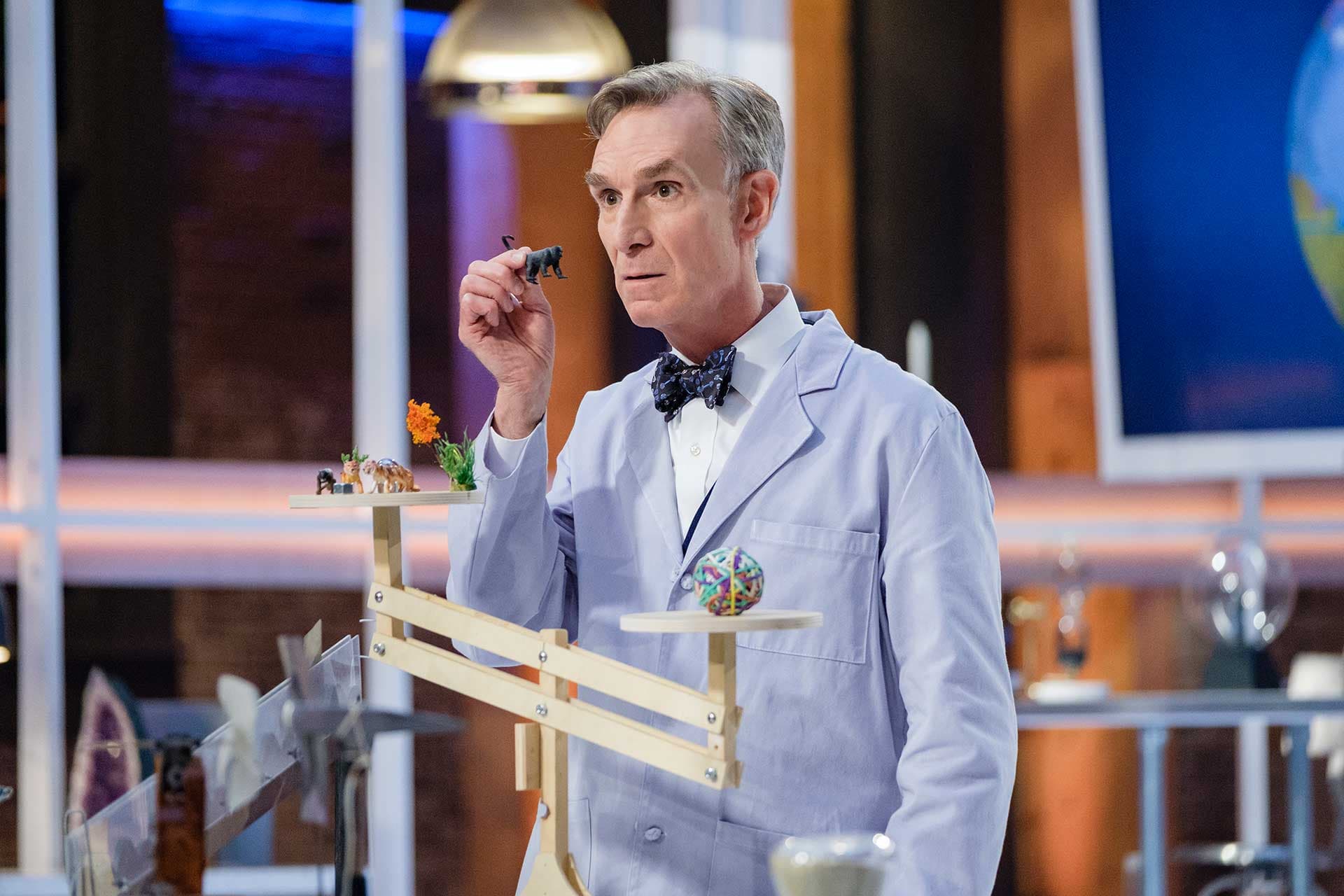 Bill Nye is all grown up, and so is the first generation of his viewers. Every millennial's favorite Science Guy is back with the second season of Bill Nye Saves the World on Netflix.

But the world looks a lot different today than it did in 1998, when Bill Nye the Science Guy went off the air. Climate change, once little more than a hypothesis, has become one of the defining issues of our age; people have counteracted ease of accessing information on sophisticated computers and smartphones with powerful strains of denialism and skepticism.

Fortunately, we have Bill Nye streaming to our screens to set the record straight. Nye chatted recently with Futurism about the new season of his show, what the near and far future might hold, and how we can ensure the best possible outcome.

Futurism: How did you choose the focuses of the episodes this season, and what are you most excited about?

Bill Nye: The writers and I sit and sometimes pace and discuss topics in the news and topics we think will be relevant in the coming year. I think we've really nailed it this time.

F: Is there an episode that stands out that people are going to love?

BN: I think the marijuana episode is going to be well viewed because there's so much marijuana controversy these days. The western states, especially, have legalized it. Other states have kept it as a Schedule I drug. Schedule I means it's presumed to be addictive and presumed to have no medical value. But there are many, many people who swear by the medical value of marijuana.

The reason no one is sure is that marijuana hasn't been especially well studied. After it was declared Schedule I, you can't study it. So there's an irony. That's the upshot of the show.

F: Your previous show ended in 1998. I watched it when I was a kid. Why did you decide to jump back into Bill Nye Saves the World in 2017? What is unique about this moment, and what has happened in the interim?

BN: Streaming services were created in the interim. Everybody keep in mind that, after the Science Guy show ended after 100 shows... I was working in television on cable services that were not as widely viewed as Netflix is. Netflix approached me to host a show, I said, "heck yes, let's go." The great thing about the Netflix deal is that we have so many more resources, more people on the crew, much bigger travel budget, lighting, a great big set. It's exciting.

We want everyone in the world to embrace the process of science, which enables us to have a television show on a streaming service in the first place. Without an understanding of electricity and electromagnetism, we really wouldn't have any of this, would we?

F: We agree that science is the force that will shape the future. How do we get kids interested in science and tech in a genuine way?

BN: We don't have any trouble getting kids excited about science. The problem is keeping them engaged as they move through their academic career and get into the workforce. Kids love science.

The whole thing is just to require [science]. You spend more time in school than you do with your parents. So we want school to be a valuable place and a valuable use of your time when you're a kid and a high school student. And for that, we want to insist that we have science every day in every grade, preschool through 12th grade. And that doesn't take that much of an investment, but it does take a commitment from lawmakers and school boards and so on.

F: This loops into your comment about commitment to science. Is there something unique about this moment and the way we talk about science in our country?

BN: We have a very successful anti-science movement right now — people that deny the efficacy of vaccines, people who deny climate change even while the world's sixth largest economy — California— is on fire. People deny the reality of climate change while the United States' fourth largest city— Houston— is underwater. And so this is a very serious problem. You can't just ignore it. I think it's becoming apparent to more and more voters. But this idea that you can declare that there are more people on the National Mall when there clearly aren't, and the flat earth people are everywhere — it's weird. And it won't last, it can't last.

BN: Climate change. Cybersecurity is also very important. We run our whole society on the internet. If it goes down, our economy goes down. For example, our agriculture's deeply affected because of the so-called supply chain. Growing food is one thing — getting it from a farm to a table is another. Managing the food and managing the farm resources takes electronics and takes the internet. Many large farm tractors now are autonomous vehicles that run on global positioning systems, planting seeds within seven centimeters of each other, precisely fertilized for the exact place on the field and the chemistry of the soil at that place. All that is dependent on space assets — satellites and the internet. So if we have cybersecurity problems, we've got big problems.

I predict no one is going to want to settle on Mars. Mars is just fantastically hostile. When you look at the pictures, it looks like a place. It looks like the Mojave desert or Palm Springs or something when you're based away from the golf course. But there's hardly any water. It's fantastically, bitterly cold. And there's no air to breathe. You will notice that immediately. If you take your helmet off, you will notice that you suffocate in a few seconds as you freeze to death. But we do have a science base in Antarctica, so maybe someday there will be a science base on Mars. But that's a long way off.

The singularity is this guy [Ray Kurzweil's] claim that, just as he's about to die, computers will become as sophisticated as a human brain and he will transfer his mind and his life experiences into a computer. At that moment, the singularity, then computers will begin to take over the world. I'm very skeptical. He had it at the year 2029, which I believe is the year he turns 80. Coincidence? You decide.

F: It does seem like that disparity between the people on the cutting edge and the people who haven't yet gotten into this technological world is growing really fast.

BN: The other thing that's very important to all of us is, we have this increasingly complex society that's entirely based on science or understanding the natural world, and we have a larger and larger fraction of our society that doesn't understand how it works, or doesn't accept and embrace the process of science, which has enabled us to have this extraordinary technology. That is a formula for disaster. That is a recipe for bad outcomes.

'Oh, I'll just go to the cash machine.' Cash machine's not working. 'What's a cash machine and how does it work?' Well, it works using 1's and 0's rendered by transistor logic put on integrated circuits using silicon doped with germanium and arsenic. 'How do you do that?' If people don't understand that, we're going to have trouble.

F: Is that commitment from lawmakers that you mentioned before, is that enough to start to close that disparity?

BN: It's certainly necessary, if not sufficient. You're never going to get there without students coming of age with an understanding of science. So what's happening is, the climate change deniers are, as I like to say, aging out. But the young people, millennials and younger who recognize the seriousness of climate change, are they going to be able to put new systems in place for generating electricity, providing clean water, providing access to the internet? Are they going to be able to do that fast enough to address climate change, or will there be catastrophic fires in California, catastrophic floods in coastal cities so fast that it displaces populations and people become unproductive before they can get anything done about it? We'll see, won't we?

F: What is one science fact that you wish more people knew?

BN: Carbon dioxide is a very small fraction of the Earth's atmosphere. But without it, we wouldn't have green plants, and the oceans would be frozen instead of liquid.

Read This Next
Elonely Planet
Elon Musk Shares Incredibly Stupid Meme Stolen from iFunny
Bad Science
Cosmologist Lists the Stupidest Things People Believe About Space
Tell All
"No Chance Is a Corporation Going Near My Brain": Futurism Mailbag
Class Warfare
Fearful Parents Are Buying Bulletproof Backpacks for Their Kids
Helpful Hemp
Seven Ways Cannabis Legalization Will Make the Future Better
More on Future Society
Musk's Guns
6:50 PM on the byte
We Are Alarmed by Every Detail of Elon Musk's Bedside Table
Head Like A Hole
Nov 23 on futurism
Elon Musk's Crying About Trent Reznor Shows That He Is a Big, Big Baby
Miserly Musk
Nov 22 on the byte
Cheapskate Elon Musk Refusing to Pay Bills at Twitter
READ MORE STORIES ABOUT / Future Society
Keep up.
Subscribe to our daily newsletter to keep in touch with the subjects shaping our future.
+Social+Newsletter
TopicsAbout UsContact Us
Copyright ©, Camden Media Inc All Rights Reserved. See our User Agreement, Privacy Policy and Data Use Policy. The material on this site may not be reproduced, distributed, transmitted, cached or otherwise used, except with prior written permission of Futurism. Articles may contain affiliate links which enable us to share in the revenue of any purchases made.
Fonts by Typekit and Monotype.