Must-have software for creators in the age of YouTube. 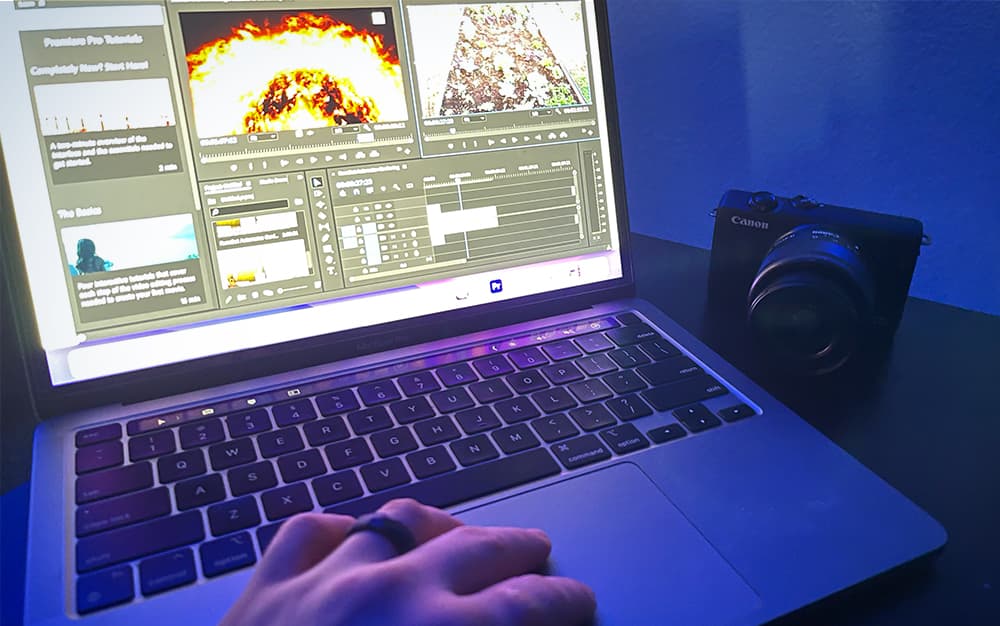 There’s a quote that summarizes the internet that’s often misattributed to Andy Warhol: “In the future, everyone will be world-famous for 15 minutes.” Even Warhol couldn’t have predicted Jake Paul, though. And while YouTube views are coveted by everyone from large corporations to humble beauty bloggers, the process of editing video is enough to squash many dreams of e-stardom. Luckily, Mac has some of the best video editing software available.

It’s no secret that Mac-powered PCs and laptops are great for media production of all kinds, but video editing is especially graceful here. Still, for those breaking into content creation figuring out which video editing software for Mac is right for you can be very daunting, especially when you consider a few have some seriously high price tags. We’ve got recommendations for everyone, no matter your needs, high hopes, and budget.

How We Picked The Best Video Editing Software for Mac

Ease of Use: Editing can be fun, if you’re into that sort of thing. Even if you don’t get your jollies splicing and cropping, apps should make things as simple as possible. Yes, doing the serious cinematic stuff might require watching a primer or two on YouTube — or perhaps even a film school degree — but basic editing shouldn’t be any harder than it is on Snapchat or Instagram.

Speed: Macs are known for their fantastic visuals and processing speed, which is why creatives favor them. It’s just not optimal if video editing software slows down a lot when it’s in use, or sucks up way too much RAM. After all, when you’re juggling between different media, there’s a good chance that you’ll have other demanding applications open. There’s a little more leeway here when it comes to rendering videos, but activity should be responsive and quick.

User Interface: I dare you to look at video editing software made in the ‘90s or early ‘00s. User interfaces in these ancient apps are clunky, disorganized, and sometimes look so foreign that they don’t immediately read as video editing software. A great UI experience is one with a massive workspace, plenty of macros for common tasks, and easy to navigate menus. Bonus points if the app aesthetics look good. “You can’t judge a book by its cover,” applies to people, but not video editing software.

Why It Made The Cut: Apple’s flagship video editing software comes with everything a video editing professional needs, but is simple enough for newbies to jump in.

The latest release comes with Object Tracker and Cinematic Mode, which takes advantage of machine learning to match up faces and objects to titles and effects. There’s not an ounce of guesswork when it comes to editing everything from sound to contrast. Changes to audio and visuals happen in real time, quickly and easily. Because it’s made by Apple, Final Cut Pro is made to take full advantage of Mac PCs and laptops’ processing capabilities which means you’ll be able to edit complex projects with high frame rates and frame sizes. There’s little guesswork when it comes to exporting, with presets for optimization depending on the desired viewing destination, including sites like YouTube, or devices like Apple TV and iPhone. This is only scratching the surface as far as features are concerned, but the great thing is that even beginners will feel at home in this incredibly intuitive program.

Why It Made The Cut: Adobe Premiere Pro 2022 is one of the video industry standards, but it may be a little less approachable for those looking for a simple solution.

Cons:
— Rough for those looking for an entry-level experience
— Requires a monthly subscription

Adobe Creative Suite is everything a creator needs, and Premiere Pro 2022 is the top of the line video editing software available in the app subscription service.

As annoying as paying for a subscription for an app may be, Adobe Premiere Pro 2022 is updated constantly to make it the monolith it is. Because it works through Adobe Creative Cloud, it’s a great choice for video editing teams. Files can be shared quickly and easily. And because it’s an Adobe program, there’s perfect integration when using Photoshop, Illustrator, and Audition files in video projects. Unlike iMovie and Final Cut Pro, Premiere Pro is also available on Windows devices, so you can open up and edit no matter what device you’re on. The only downside is that it’s not a great place to start any video editing adventure. Tasks that are done with simple drags and drops in other apps usually take a couple more steps in Adobe Premiere Pro. Still, if you decide to grow the video editing callouses, it’s a very reliable application.

Why It Made The Cut: For an application that’s complementary with every Apple PC and laptop, iMovie packs quite a lot of video-editing wallop for beginners.

What’s better than free? For those breaking into the beautiful world of post-production, iMovie is rife with training wheel features so it’s perfect for beginners and anyone who needs a piece of simple video editing software for Mac.

And we really have to underline the word simple here. While professional-grade video editing applications offer endless video channels and layers for text, overlays, and effects, iMovie offers only two channels to work with. Sacrificing the amount of channels here may be an easy trade-off, as there are still plenty of built-in features to work with including a fair amount of transitions, titles, and even video effects to work with. You’ll even get some premium features that allow you to tap into cinematic visuals with a simple drag and drop process familiar to everyone. And like any great entry-level application, once you become a video editing novice, many of the skills you picked up in iMovie transfer easily to more professional options, especially Final Cut Pro. It’s not simply video editing software, it’s a video editing intro course.

Why It Made The Cut: Adobe’s free offering is a way, way scaled down version of Premiere Pro, but it’s the best answer to anyone editing on-the-go.

But like iMovie, professionals will find nothing but heartache here. Premiere Rush boils away all the extra features that are present in glitzier offerings to make a no-frills app for editing on the fly. Premiere Rush is, after all, primarily a mobile app that you can also use on a desktop. Strangely and sadly enough, the desktop version is only available through an Adobe Creative Cloud subscription, whereas the mobile version is free via the App Store. Still, for video editors looking for a quick and easy video editing software for Instagram, Tik Tok, and Snapchat use, Premiere Rush may tick all the boxes.

Ever since Adobe introduced the subscription model for its Creative Suite apps, many video editors (including myself) groan everytime the software giant plucks its monthly dues out of my Paypal. For those who simply won’t bend to the Netflix-style payment model for access to apps, there’s Adobe Premiere Elements 2022.

Premiere Elements, like Premiere Rush, is a scaled-down version of Premiere Pro. However, there’s plenty more to work with here, especially for video editors who have finally gotten some of the basics in their fingers. For those still learning, Adobe Premiere Elements 2022 comes with Guided Edits, which help you grow your skills as you tap into them. There’s also plenty of built-in templates for animated slide-shows, video collages, and endless possibilities for web and social media bound content. It may not be as dynamic as Premiere Pro, but there’s plenty of intuitive features to use, including facial recognition and even AI. Adobe Sensei AI does everything from fixing aspect ratios to improving grainy visuals so people, objects, scenery, and graphics all pop off the screen.

Things to Consider Before Buying Video Editing Software for Mac

Many of the better video editing software options are pricey, with the favorite Final Cut Pro topping out the pack. It makes little sense to shell out a bunch of cash on a piece of pricey software if you’re not going to edit video on a regular basis. This goes double for applications that are only available via a subscription model like Adobe Premiere Pro. If you need a good standby for quick and simple work, iMovie (which is free!) may be more than enough for your needs. However, if you want a good and reliable standby which also packs a fair amount of features, Adobe Premiere Rush is also a good choice, though it is a paid piece of video editing software.

This compilation of video editing software for Mac didn’t include deeper cuts like Wondershare Filmora Pro or CyberLink PowerDirector 365. These are both fine applications with features that aren’t on par with the two premium options like Premiere Pro and Final Cut Pro, but still fairly sturdy and reliable. The reason they didn’t make the list was that when it comes to support, there’s simply no competing with the big boys. Buying flashy graphics and add-ons for both Final Cut Pro and the entire Adobe Premiere line is too easy not to do. Custom titles, drag-and-drop visual effects, and even full-blown graphics can be purchased on sites like Creative Market.

This goes double for tutorials and how-to videos. If you’re unsure how to pull off a special effect or editing trick for Final Cut Pro or Adobe Premiere, there’s a good chance there’s an in-depth video tutorial on YouTube. Adobe even produces a bunch of in-house how-tos for Premiere Pro, Elements, and even Rush, along with their other Creative Cloud applications. Knowledge that used to be exclusive to community college courses can now be accessed by just about anyone.

There’s a good chance that if you bought a Mac in lieu of a Windows- or Linux-powered system, you did so to use it as a media creation tool. And who could blame you? Macs are pretty good for that sort of thing. However, if for some reason you like to jump from operating system to operating system, you may want to consider editing exclusively on Adobe Premiere programs. You can start an Adobe Premiere Pro project on a Mac device and share it, open it, and edit it on a Windows device. This impressive feat isn’t possible when editing with iMovie or Final Cut Pro, as these applications live exclusively on Mac.

Q: Does macOS have a built in video editor?
Yes, macOS devices come with iMovie, which is a good starter video editing application.

Macs are great devices for media production, including video editing. It is perhaps no surprise that Apple’s premium video editing software, Final Cut Pro, takes the gold for it’s wide support, unfathomable operating speed and stability, and how it manages to be both professional grade and user-friendly. Plus, it has that special Apple aesthetic that many Mac fans swear by. Video editing software should be reliable, but it doesn’t hurt if it looks good too. iMovie, while not packing nearly as many features, is still a fairly solid entry for beginners, especially since it’s totally free. Adobe Premiere Pro is also a fantastic choice, that could easily share “best” status with Final Cut, and works fantastic with other Adobe applications like Audition, Illustrator, and of course, Photoshop.