The smartest way to expand your space. 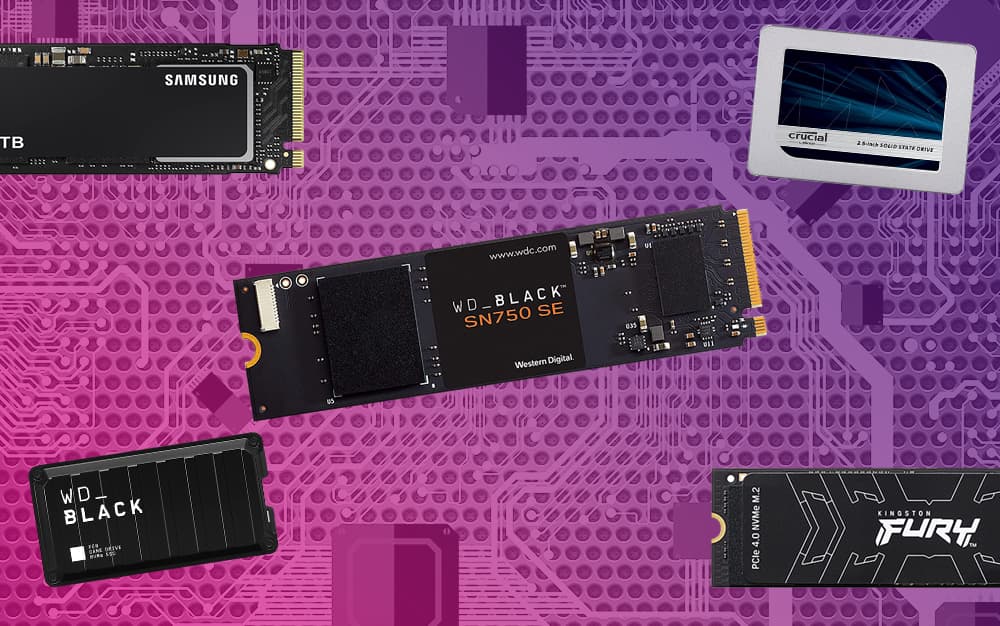 Any great rig needs an excellent SSD for gaming. Solid-state drives are a must for quick and stable load times, and will only improve the overall performance of even the most powerful gaming PCs. If you’ve put off upgrading your space, there’s never been a better time to treat yourself to an upgrade. SSDs are faster than ever, and even demanding titles will load quicker than ever — in mere seconds, in some cases. Here’s a thorough roundup of the best SSDs for gaming available right now.

How We Picked the Best SSDs for Gaming

When buying a new PC, the amount of hard drive space available on any given console can make a difference of hundreds of dollars, so it’s not always prudent to invest in a PC with tons of terabytes out of the box. However, investing after the fact is incredibly easy, especially if you can score a good deal. Here’s what we looked for when picking out the best SSDs for gaming.

Size: As far as we’re concerned, size definitely matters when it comes to SSDs for gaming. Anything less than a terabyte just isn’t worth the hassle or the discount, which will likely not be large enough anyway. Of course, not every gamer plays the same genres, so only splurge on the extra space if you’re the type who plays new, popular, and demanding titles.

Speed: One of the main reasons to invest in one of the best SSDs for gaming is to rev up your loading speeds. Both writing speeds and reading speeds are important, but you definitely want to place a little more importance on the latter. Expect to pay more for speedier drives.

Longevity: These drives are powerful, and like anything from graphics cards to RAM, expect even expensive models to heat up. To qualify as one of the best, an SSD for gaming needs to survive at least an entire gaming generation before the noticeable deterioration in performance and speed. Your mileage may vary, but pricey drives should all come with a degree of longevity you can bank on. Many models even come with extended warranties gratis.

Why It Made The Cut: A solid-state drive for gaming that redefines fast.

WD_Black SN750 is an SSD made with gaming in mind and engineered from top to bottom to accommodate even the most demanding rigs.

Next-gen PCIe technology provides a speed that seems almost unfathomable. It’s compatible with modern motherboards and systems, and the slim SSD connects easily to NVMe slots for some seriously effortless installation. Once installed, expect read speeds of up to 3,600 MBs per second so you can spend less time looking at a loading screen. What makes WD_Black SN750 stand out from the pack is the intuitive app, WD_Black Dashboard (available for Windows). It  monitors the health of your SSD so you can max out those specs easily. And because it draws up to 30 percent less power than before, you can get in the game, and stay in the game longer. Sadly, the WD_Black SN750 doesn’t have AES 256-bit encryption, so it’s not as secure as other devices in its class.

Why It Made The Cut: An excellent choice for anyone looking to expand space on a laptop or gaming console.

Laptops aren’t known for their hard drive space, but with the Samsung 980 Pro SSD, you can match your device’s portability with the freedom of endless storage.

The Samsung 980 Pro SSD is incredibly fast, with read speeds of up to 7,000 MBs per second. Even if you don’t game on your MacBook or Windows laptop, this SSD for gaming works fantastic for demanding applications like Logic Pro, Adobe Premiere, and Final Cut Pro. Projects will export faster than ever before, making this SSD for gaming a great option for work and play. Because faster SSDs tend to run hot, Samsung 980 Pro SSD utilizes nickel coating, which helps manage the heat level for some dependable thermal control. It even minimizes performance fluctuations when during extra-long gaming sessions. If you plan on installing on a PS5, you will need to update the firmware to top out the read and write speeds, which isn’t exactly easy to do for many users.

Why It Made The Cut: The portable offering in the WD_Black line of drives is compatible with just about any device that you game on.

If you’re leery about messing around with motherboards, the WD_Black P50 Game Drive SSD provides a user-friendly way to bring your game library with you.

It’s small enough to pack along with any laptop, and will easily fit in any backpack and even some pockets. Despite being portable, it’s also the most durable SSD for gaming, complete with shock resistance. The forged aluminum cover offers serious protection against accidents big and small and even manages to make this portable drive look great. It’s also compatible with just about every gaming destination, including PC, Mac, PS5, and Xbox Series consoles. This SSD for gaming even packs impressive reading speeds, especially when you compare it to other non-gaming external hard drives. That said, all that power comes with one caveat: it can run hot from time to time.

Why It Made The Cut: If you’re looking for fast, SSDs for gaming doesn’t get much faster than Kingston FURY.

If you’re a speed demon on the prowl for a seriously fast SSD for gaming, we highly recommend the Kingston FURY Renegade Pale Gen 4.0.

The speed in this SSD for gaming is cutting edge, with reading speeds of up to 7,300 MBs per second. While you can expect any drive this powerful to heat up, Kingston Fury stays cool, even when you game for extended periods. A low-profile graphene aluminum heat spreader keeps your drive from overheating. It’s also a fantastic option if you’re looking to add more space to a PS5. Kingston makes it easy to get the most out of your Sony console, complete with a visual installation guide. While this SSD for gaming could easily qualify as the best, its price point is only for those looking to really break the bank on gaming storage. Still, if you can afford it, it’s definitely worth the extra investment.

Why It Made The Cut: For a few compromises, the Crucial MX500 SSD is a storage option that won’t break the bank.

Not every SSD for gaming has to break the bank, and the Crucial MX500 is proof positive of that.

Of course, at this price point, you can expect write and read speeds to be a fraction of what they are on more powerful SSDs for gaming. But don’t expect it to run at a snail’s pace. You can still expect about half a gigabyte per second of reading and writing speed, which isn’t too shabby. Crucial MX500 provides some of the best and most stable data migration as well. Like any great SSD, it’s very energy efficient, especially compared to standard hard drives. And with AES 256-bit encryption, you can expect a reasonably good level of security for all your games, media, and sensitive files. And unlike other offerings in this round-up, it’s well within most budgets.

Things to Consider Before Buying an SSD for Gaming

Go Big, Or Go Home (If You Can): Considering that installing a new SSD for gaming will require you to crack open your rig, it’s best to get an SSD that has more space than you think you’ll need. After all, it’s not exactly a good idea to constantly mess around with sensitive computer parts more than a couple times a year. A good rule of thumb is to buy a little more than you think you’ll need. Many of the offerings in this round up top out at 4 TB, which will likely accommodate your gaming library with room to spare. Or at the very least, the games you play on a regular basis.

Types of SSDs: Aside from our budget (Crucial MX500 NAND SATA 2.5 Internal SSD) and external (WD_BLACK P50 Game Drive SSD) picks, all the SSDs in this roundup are NVMe PCIe based instead of SATA. Why? Speed, of course. SATA drives top out at a measly 600 MBs per second. Compare that to PCIe drives, which can top out at 8,000 MBs per second. The choice is clear, as long as you don’t mind dropping the extra cash for it of course. We believe the investment is more than worth it, considering the exponential speed capabilities in PCIe compared to SATA. That said, make sure that your computers motherboard can accommodate an NVMe PCIe-based SSD. Micro Center AMD Ryzen 9 5950X 16-Core 32-Thread AM4 Unlocked Desktop Processor with ASUS ROG Strix X570-E Gaming WiFi II ATX Gaming Motherboard will accommodate many rigs in need of an upgrade, but the motherboard already in your PC, laptop, or console may work just fine.

Q: Are SSDs necessary for gaming?

While SSDs are not necessary for gaming, they access files and load programs faster than mechanical hard disk drives or HDDs.

Q: Which SSD type is best for gaming?

On average, PCIe SSDs are faster than SATA SSDs, making them perfect for gaming applications.

Q: Is the NVMe SSD better for gaming?

Q: Can you buy refurbished SSDs?

You can buy refurbished SSDs, but there are far too many variables in quality when it comes to buying a used SSD so we don’t recommend it.

Q: Which SSD is fastest?

Kingston FURY Renegade Pale Gen 4.0 NVMe Internal Gaming SSD is among the fastest SSDs for gaming with read and write speeds of up to 7,300 MB per second.

No, SSDs will not improve your frames per second, but it will make games load faster.

Final Thoughts on SSDs for Gaming

Speed is everything, and upgrading a rig with one of the best SSDs for gaming is a must for hardcore players of all kinds. The WD_BLACK SN750 SE NVMe Internal Gaming SSD Solid State Drive is our pick for overall best, because of its speed, stability, and competitive price point. To load games in moments, not minutes, Kingston FURY Renegade Pale Gen 4.0 NVMe Internal Gaming SSD is definitely worth the extra cash.