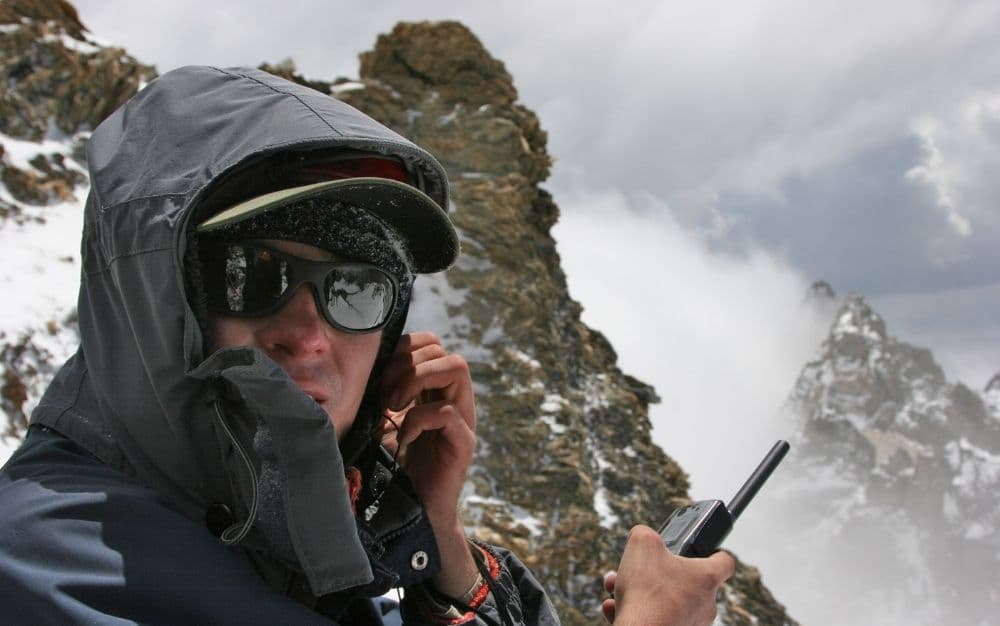 Looking to go off the grid? A satellite phone is an essential tool to help you maintain some contact with civilian life. Unlike cellular phones, which are limited to places with cell towers, satellite phones allow people to make phone calls from virtually anywhere on the planet. This capability makes satellite phones the ideal choice for those whose adventures take them well away from civilization. Not all satellite phones are alike. They can range dramatically in the amount of coverage they offer, talk clarity, battery life, and durability, making choosing the right one for your off-grid excursions a challenge. This guide will review what options you should consider when shopping for a satellite phone and review some of the best satellite phones on the market.

How We Picked the Best Satellite Phones

I used various criteria in reviewing more than a dozen top satellite phones for our list of the top five models. For a satellite phone to be useful, it needs to work where conventional cell phones do not. With that in mind, I leaned toward phones with better global coverage, but that wasn’t all I considered when it came to coverage. Even if coverage is global, a phone isn’t much good if the connection is poor, so I favored models with high ratings for voice clarity. Satellite phones are typically taken to rugged environments, so I chose models with at least an IP65 rating, which means they can survive a good dousing without being damaged. Since satellite phones must often function for long periods between charges, I chose models with longer standby and talk times. Since usage fees can be steep for satellite phones, I leaned toward phones with reasonable monthly rates.

Why It Made The Cut: Iridium has the best global coverage of any satellite phone we reviewed, along with excellent voice quality.

The mark of a great satellite phone is its ability to work just about anywhere in the world, which is why the latest Iridium model, the 9575, tops the list as the best satellite phone overall. While its battery life may not approach the 8 or 9 hours of other models, the phone provides perhaps the most comprehensive coverage of any satellite phone with global service. And though it’s one of the more expensive satellite phones when it comes to voice calls — a 90-minute plan will cost you $100 a month — Iridium is highly regarded for the clarity and reliability of its service. You’ll still experience dropped calls and dodgy service when the phone’s line of sight to the sky is blocked, but at a much lower rate than with other satellite phones.

The Extreme 9575 also includes an SOS button, which is accessible at the top of the unit under a cover. Press the button, and, after a 20-second delay, the phone will send an emergency message with GPS information every 5 minutes. The Iridium’s battery life is shorter than other phones’, with a talk time of 4 hours, but you’ll want to keep those calls brief; Iridium’s talk plans are among the priciest, at $70 a month for 60 minutes. You can purchase a backup battery if you need more talk time. The phone itself is also one of the more expensive on the market, but you can find it for as little as $1,000.

Why It Made The Cut: With affordable talk plans that throw the phone in for free, we couldn’t find a cheaper way to obtain a satellite phone.

Pros:
— Half the cost of other satellite phones with affordable talk plans
— Compact size
— Fairly good coverage for the price

Cons:
— No coverage available in most of Africa and Asia

Despite this being just the first and only satellite phone offering from Globalstar, which is best known for its SPOT satellite messenger and SOS beacon, the GSP-1700 is an impressive and quite capable phone. Its data speeds are fast enough to transmit texts quickly, and it offers voice clarity that exceeds that of much higher-priced phones. Add that to the fact that you can find it for as little as $500, and it’s hard not to like the GSP-1700. It’s an excellent deal for those who don’t mind its coverage limitations. The GSP-1700 covers most of North America, all of Europe and Australia, and parts of Asia. However, there are popular tourist spots in South America where coverage is lacking, and there is no service for all but the most northern parts of Asia and Africa. In terms of usage fees, you’ll have a hard time finding a more affordable package in a satellite phone. Globalstar often offers deals that throw in the price of the phone with talk plans starting at just $65 per month for 150 minutes.

Why It Made The Cut: With coverage of more than 90 percent of the globe, the Inmarsat IsatPhone 2 tops the list when it comes to international coverage.

Cons:
— Bulkier than other satellite phones
— Talk quality is not as good as pricier phones’

At roughly half the price of other satellite phones with similar global coverage, it’s no wonder that Inmarsat’s lsatPhone 2 is widely considered one of the best deals for international travelers. You can even find some retailers that will throw the phone in for free when you commit to a yearlong contract. This low price is no reflection on the quality of the phone, which boasts 8 hours of talk time and grants you the ability to send SMS text messages and even short emails from virtually anywhere in the world (unless you happen to be visiting the North or South Pole).

The phone is a little bulkier than some of the more expensive models, but that large size gives it a more durable build that bolsters its weather resistance, along with a larger display and bigger buttons that make it easier to operate. The phone also includes other essentials, such as an SOS button that allows you to send emergency notifications to Inmarsat’s communications center in Texas.

Though its sound quality doesn’t match that of other higher-priced phones, it’s hard not to like its low price tag and affordable plans. Talk plans start at $60 a month for 70 minutes of talk time.

Why It Made The Cut: This is the only satellite phone we could find with smartphone capabilities.

Cons:
— No coverage of the Americas

The Thuraya X5-Touch is limited when it comes to coverage, and it struggles with download speed, but for those who have to have a smartphone with satellite capability, there really is no other choice. The X5-Touch runs on the Android operating system and supports Android-compatible apps. A 5.2-inch, 1080-pixel touch screen gives X5 an interface that users of regular smartphones will appreciate. Just keep in mind that those apps will be markedly slower than on a smartphone. While 60 Kbps (kilobits per second) is fast for satellite data transfer, it’s a snail’s pace compared with the 25 Mbps (megabits per second) of a truly high-speed connection that you’ll get on a smartphone. You’ll also pay for that smartphone functionality. At nearly $1,200, the Thuraya is one of the more expensive phones on the market.

With just two satellites at its disposal, Thuraya’s coverage is also very limited. It works only in Australia, the northern half of Africa, Europe, and most of Asia. There is no coverage for North or South America. Beyond those specs, the Thuraya gets a respectable 6 hours of talk time, has an SOS button, and is fairly compact in size.

Why It Made The Cut: The Garmin inReach offers the longest battery life of any satellite messenger we reviewed.

The Garmin inReach Mini is not a satellite phone, in the sense that it does not have the capability to make voice calls. It does, however, connect to satellites to allow you to send texts from pretty much anywhere, making it useful for sending brief messages from the wild to worried family members. I say brief because the phone’s four buttons make it tedious to type out longer messages. Even if you opt not to send out texts with the phone, your loved ones can log in and follow your progress on a map as long as the inReach Mini is on.

And, since it has a standby battery life of 90 hours, you can go on long treks without power and still stay connected. As with a satellite phone, there’s an SOS button that allows you to communicate with a GEOS center to call for help. In terms of size, the Mini is notably smaller than a standard satellite phone, at just 4 inches long and 2.4 inches wide. The size, long battery life, and features make it the ideal choice for those going deep into the woods on a backpacking, hiking, or mountain biking adventure.

Things to Consider Before Buying a Satellite Phone

A satellite phone isn’t of much use if it doesn’t work in the far reaches of the world in which you plan to use it. While some satellite phone services have numerous satellites that allow them to span (or nearly span) the entire globe, many have limited coverage that may exclude entire continents. Check coverage maps when shopping for a satellite phone to ensure it meets the demands of your travel itinerary.

Satellite phones are designed to allow one to communicate remotely in places that lack conventional cell phone coverage. Those locales are typically rugged with little in the way of civilization, so a satellite phone must be built to endure harsh weather conditions. With this in mind, a good satellite phone should have at least an IP65 rating, which means it can endure low-pressure water spray such as rain or splashes from a river from any direction. IP67 is fully waterproof, which means you can submerge the phone in water as deep as 1 meter for up to 30 minutes without damaging it.

Q: What is the most reliable satellite phone?

With 75 satellites orbiting Earth, including 66 operational ones and nine backups, Iridium offers the best coverage of any satellite phone provider. This comprehensive coverage makes its Iridium Extreme 9575 Satellite Phone one of the most reliable satellite phones you can buy.

Q: Can satellite phones be tracked?

Since satellite phones have a GPS device inside of them that connects to a satellite, they can be tracked. Satellite phones use encryption to protect them from attacks by hackers; however, they aren’t 100 percent secure. There are cases of journalists and aid workers being tracked down via their satellite phones while working in war-torn countries. Satellite phones’ ability to be tracked makes them unsafe to use in situations where privacy or protecting one’s location is critical.

Q: Is it illegal to own a satellite phone?

Q: Why are satellite phones so expensive?

The reason satellite phones are considerably more expensive than cellular phones is due mainly to scale. Satellite services have a significantly smaller number of customers than cellular services. This forces satellite phone providers to charge more for their devices and services in order to pay for the costs of the network and developing equipment.

Though it’s pricier than other satellite phones on this list, global coverage coupled with a long battery life and excellent voice clarity makes the Iridium Extreme 9575 Satellite Phone worthy of trips to the far corners of Earth. Those looking for a more affordable option that still offers good coverage should consider the Globalstar GSP-1700.