The Best Samsung Soundbars of 2023 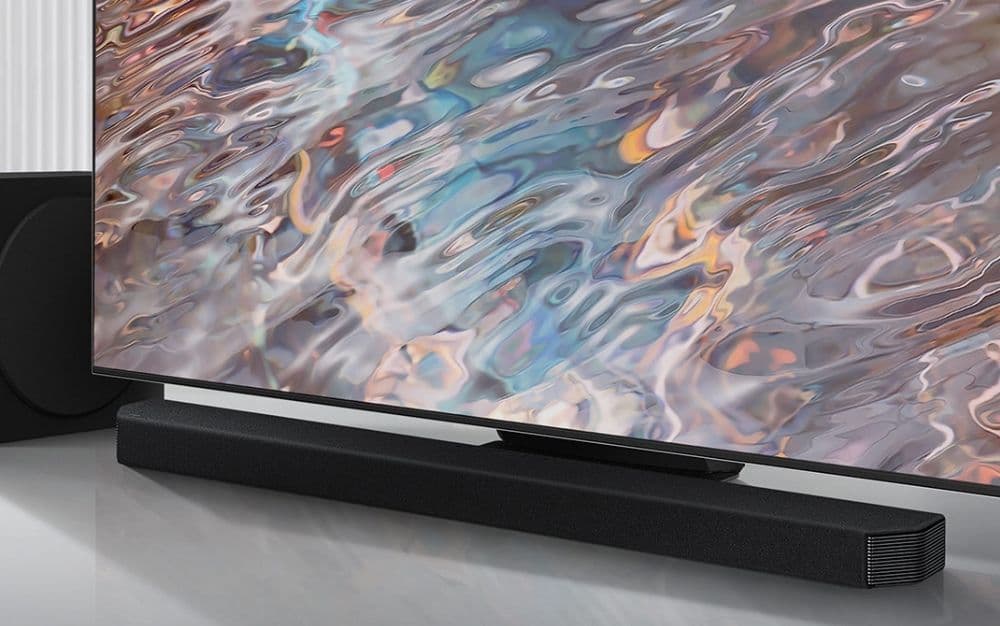 Samsung's TVs and smartphones get the lion's share of attention when it comes to the company's portfolio of consumer technology, so it's easy to forget about the best Samsung soundbars. This large, diverse series has the same premium look, feel, and features as the company’s other gear, and make a perfect complement to any TV used as part of a home theater system.

Soundbars have become an essential accessory for anyone who cares about getting a cinematic experience when watching movies or playing games because televisions have gotten extremely thin, which means there's much less room for good-sounding internal speakers. Beefing up your home theater system with speakers used to mean investing in an AV receiver and multiple big, bulky speakers, but soundbars are a much better alternative for most people.

A Samsung soundbar will take up a lot less room than a traditional home theater system while being a big upgrade over the speakers built into your TV. Samsung designed its soundbars with audio quality in mind, oftentimes developing its own speakers and amplifiers in house to ensure they sound better than similar options from its competition. If you're sick of your TV's sub-par sound system, the best Samsung soundbars we're recommending will be a big improvement.

How We Picked the Best Samsung Soundbars

Methodology: Because soundbars are paired with TVs, we went into our research thinking about all the situations where one would want to keep their set. In your home, you may have a big 65-inch TV in the living room, a 42-inch TV in the bedroom, and even keep one outdoors for entertaining guests when the weather gets nice. You may keep your TV on a media console, or mount it to your wall.

In all of these cases (and dozens more), you'll need a soundbar that can fit in your setup. We've found Samsung soundbars that work in the widest range of home theater system configurations, and will continue to update it as new models are released.

Length: Our Samsung soundbar recommendations vary in length between 27.6 inches all the way up to 48 inches, which will accommodate TVs of all sizes. You'll want to get a soundbar that's roughly the length of your TV if you care about the aesthetics of your home theater. For reference, a 65-inch TV is roughly 33 inches long. Something to keep in mind: longer soundbars do have space for additional speakers, which translates to richer sound.

Subwoofer: If you care a lot about bass, you'll want to get a Samsung soundbar that includes a subwoofer. Subwoofers are larger, standalone speakers that are capable of reproducing sounds with a lot of low frequencies (think explosions in an action movie), which makes them sound more realistic.

Dolby Atmos: This technology allows a soundbar to create a surround sound-like experience by including speakers pointed toward you and tilted upward. If it's positioned in the right way, and your ceiling is tall enough, some sounds will come at you from straight ahead, while others bounce off the ceiling and sound like they're above you. The technology can be very convincing if you have the right room, and the content you're watching has sound mixed specifically for a Dolby Atmos setup.

Smart Assistant: In some cases, Samsung has designed its soundbars with microphones that allow you to control them using Amazon's Alexa. This feature lets you adjust the soundbar's volume, turn the TV on, and switch inputs using your voice instead of picking up the remote.

Why It Made The Cut: This soundbar's big size translates into rich sound, and Samsung packed it to the gills with useful features.

Cons:
— May be too big for your TV and room
— Expensive

Samsung's HW-Q900A is the no-compromise choice if you're looking for a soundbar that has the most cutting-edge features.

These features will be especially noticeable when watching movies or playing games because the sound for that media has been mixed to specifically take advantage of them. These features are available regardless of which TV you have, but Samsung designed a couple of additional ones if you use one of the company's sets. Samsung TV owners can take advantage of SpaceFit Sound, which automatically calibrates the HW-Q900A to sound best in your room. SpaceFit accounts for the size and shape of your space, and tunes the TV and bar accordingly. The other feature is called Q-Symphony, which syncs the speakers from the soundbar with the ones in your TV to create an even larger home theater system.

We're very happy that Samsung's HW-Q900A has support for both Amazon Alexa, for totally hands-free use, and Apple's AirPlay 2 technology, which lets you stream media to it directly from your iPhone, iPad, or Mac. These features aren't necessary, but it allows you to use the soundbar's audio system even when you're not watching or playing something. We like when a single gadget has multiple uses — in this case a soundbar for your TV, smart speaker to control accessories around your home, and an audio system for your music.

This whole-package approach typifies what makes Samsung's HW-900A such a great investment to complement your new TV. Samsung even allows you to upgrade this system later on by adding wireless rear speakers, which will improve the performance of its surround sound and Dolby Atmos features, since speakers will be pointed toward you from two additional directions.

If you want a premium soundbar, with features you'll actually appreciate rather than meaningless frills, this the HW-900A is the one to get. Pair it with one of the best gaming TVs.

Why It Made The Cut: Samsung's entry-level soundbar has audio features that you wouldn't expect from budget-friendly audio gear.

Samsung's HW-A450/ZA is not only the best budget-friendly Samsung soundbar, it's one of the best deals in tech.

For under $150 you're getting a soundbar that comes with a subwoofer for better bass, and can be augmented with wireless speakers to create a 5.1 surround-sound system. Those additional speakers bring this soundbar's price up to roughly $300, but that's still relatively inexpensive for a surround sound system. Plus, making this upgrade at the time of purchase or later on remedies the only real complaint we have with the HW-A450/ZA: its lack of built-in surround sound features.

Samsung managed to squeeze luxury features into this soundbar, including Adaptive Sound Lite, a technology that analyzes what you're watching to make sure one sound (dialogue, for example) isn't drowned out by noises happening in the background. This can prevent you from having to keep your fingers on the volume buttons of your remote, or switching between different audio modes. While we recommend plugging this soundbar to your TV using an HDMI cable, it can be connected wirelessly over Bluetooth. A wireless connection may be more convenient, but may introduce latency (lag), which can get frustrating quickly.

If you don't mind the HW-A450/ZA's lack of surround sound out of the box, we can't recommend it highly enough. It's the most cost-effective home theater upgrade available right now.

Why It Made The Cut: Samsung's HW-LST70T is designed to be used outdoors, rain or shine.

A lot of soundbars are designed for indoor-use only, but Samsung's HW-LST70T bucks that trend. Samsung says it designed the soundbar to be dustproof, and water resistant enough to survive being sprayed consistently with water (aka rained on) without being damaged. This design comes with a couple of drawbacks — namely the lack of an included subwoofer or surround sound support — but the pros far outweigh the cons.

Because it was designed to be used outside, the HW-LST70T features a powerful internal woofer rather than an external subwoofer. You should still get great bass response, and don't have to worry about plugging two audio components into the limited amount of outlets you have outdoors. Samsung also designed the HW-LST70T with audio technologies like distortion canceling, which prevents over modulation (clipping) from occurring, and adaptive sound, which automatically optimizes audio at any volume level.

Samsung also created the HW-LST70T with Amazon Alexa support for hands-free use, and the ability to connect it to your TV wirelessly using Wi-Fi or Bluetooth. You can also use the soundbar's Bluetooth feature to wirelessly stream music to it from any of your devices. Samsung's HW-LST70T is the only soundbar we feel confident in recommending pairing with an outdoor TV. It's fully featured, and Samsung considered how to negate every limitation inherent in an electronic designed to stay outdoors. If you entertain a lot, or live in an area where you can spend time watching TV outdoors year-round, this is the only soundbar you should consider. You can also optimize your audio experience with one of the best outdoor Bluetooth speakers.

Things To Consider When Buying A Samsung Soundbar

Size of Your Room

We mentioned getting a Samsung soundbar that's proportional to the size of your TV. It's also smart to get a soundbar that matches the size of your room. A long soundbar is capable of getting louder, but you won't need all that power if you're in a small space. There's no hard and fast soundbar size to room size ratio, but be mindful that spending more for a bigger one may not be worth it.

Soundbars are one of the few pieces of consumer technology that don't get outdated quickly. That's because very few significant hardware advancements are made year over year. That said, if you are upgrading from an older model, we recommend reading our guide on how to recycle e-waste.

Q: Will a Samsung soundbar work on a non-Samsung TV?

Yes, Samsung soundbars will work with TVs made by any manufacturer without losing any critical features.

Q: How do I connect my Samsung soundbar to my TV?

For the best experience, Samsung soundbars should be connected to a TV's ARC (audio return channel) HDMI port. This allows you to control the volume of your soundbar using the remote that came with your TV, simplifying your setup.

Q: How much does a Samsung soundbar cost?

A Samsung soundbar can cost from around $100 for a refurbished models to more than $1,500 for soundbars designed to accompany premium TVs.

If you've never tried a soundbar before, any of the Samsung models we're recommending should come as a welcome surprise. The difference in sound quality, when compared to your TV's speakers, will be pretty astonishing. The overall build quality of Samsung's soundbars is also impressive in our experience, and you should expect to use the one you get for a long time, even after you've replaced your current TV.