Stay connected and track your health metrics too. 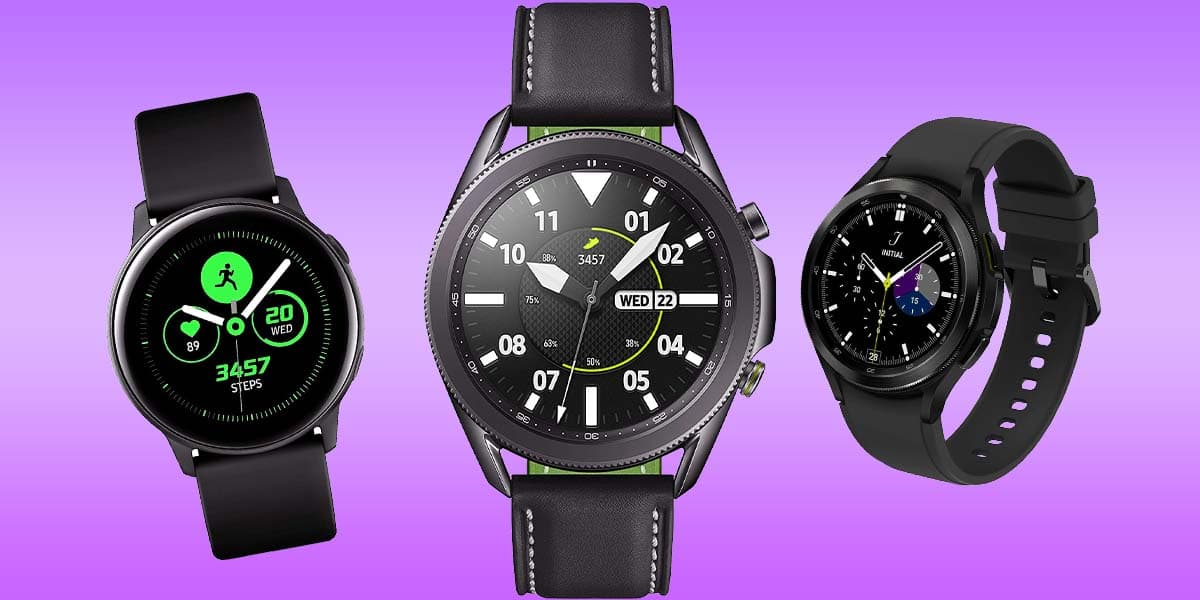 The best Samsung smartwatch may be the brand’s newest model, the Galaxy Watch 4, but that doesn’t necessarily mean it’s the best smartwatch for you. The Galaxy 4 is certainly impressive with its ample memory, fast processor, access to numerous apps, and advanced fitness tracking capabilities, but it also comes with a hefty price tag.

In addition to the 4, Samsung’s line of watches include its earlier Galaxy Watch version, as well as its line of Active watches, which offer many of the same features and functions at a more affordable price. Below, we’ll point you to the best smartwatches that Samsung has to offer.

How We Picked the Best Samsung Smartwatches

A good smartwatch will allow you to track your health and sleep patterns while also granting you access to apps that provide you with other useful tools such as navigation and music. Other factors we considered when judging a watch’s quality were the watch’s ability to connect to LTE and its battery life.

Price is a major factor when shopping for a smart watch. With that in mind we included Samsung's top of the line smart watch, which includes all the bells and whistles, such as an EKG, oxygen level monitoring, heart rate monitoring, body composition tracking, and a blood pressure monitor. We also included more affordable Samsung smart watches, including earlier versions of the Galaxy Watch, and watches from Samsung’s line of Active smart watches.

Why It Made The Cut: With its robust fitness tracking capabilities and access to numerous apps, the Galaxy Watch 4 is the best of what Samsung has to offer in smartwatches.

The Samsung Galaxy 4 Classic takes what was already a great smartwatch and turns it into an even better one with upgrades to both its design and functionality, making it superior to its predecessor, the Galaxy Watch 3.

For starters, the Galaxy 4 Watch is quicker than the Galaxy 3 Watch and can hold more apps, thanks to 1.5GB of storage and 16 GB of RAM. This is an upgrade over the 3’s 1 GB of storage and 8 GB of RAM. You’ll want to take advantage of these upgrades when you use the Exynos chip, which grants you access to numerous apps on the Google Play store, expanding on the handful of apps that are available on the 3’s Tizen operating system.

The Galaxy 4 also expands its health monitoring capabilities thanks to its use of the 3-in-1 BioActive sensor. While both the 3 and 4 offer activity tracking, heart-rate monitoring, sleep tracking, and oxygen-level monitoring, only the Galaxy Watch 4 gives you the ability to monitor blood pressure and body composition. While the 4 does come with an increase in cost, its ability to access numerous apps and fitness tracking capabilities make it the best smart watch Samsung has to offer.

Why It Made The Cut: The Active offers the essential fitness tracking features and applications you expect in a smartwatch at an affordable price point.

Though Samsung’s newer smartwatches have moved past the original Active in terms of power — with faster processors and slicker software, it’s still an impressive device, capable of performing the functions that most people look for in a smartwatch. The Active has the same fitness tracking features found on the newer Active 2, including heart-rate monitoring and activity tracking. You also get a longer battery life with the Active 2, which comes at a more affordable price.

While the Active offers fewer options when it comes to apps, the ones it does offer allow you to complete the tasks most commonly used on a smart watch, including navigation and music.  It does come with one particularly notable trade-off however: You will need to keep the Active 2 tethered to your iPhone, as it lacks the option to connect to LTE.

Why It Made The Cut: The Active 2 includes many of the features found on the Galaxy Watch 4 at a more affordable price.

Those looking for a more affordable smartwatch than the Galaxy Watch 4 but who still want higher-end features should look no further than the Samsung Galaxy Watch Active 2. This Samsung fitness smartwatch features GPS connectivity and functions as a heart-rate monitor and activity tracker. Notably, it also includes an ECG monitor, a feature typically only found on pricier smartwatches. The Active 2 can also track sleep stages, including REM sleep, providing you with valuable sleep quality stats.

In addition to fitness tracking, the Active 2 also provides other nice features, such as Samsung Pay and access to music via Spotify. With its sporty neoprene band and circular face, the Active 2 lacks the traditional watch appearance of Samsung’s higher-priced 4, but it’s still stylish enough to wear all day, even when not working out.

Why It Made The Cut: Despite being nearly four years older than the Galaxy 4 Watch, the original Galaxy Watch still is the best of the bunch when it comes to battery life.

Yes, the original Samsung Galaxy Watch  debuted nearly four years ago, which seems like an eternity in tech years. While it may lag behind other pricier Galaxy watches that run on the newer Exynos processor, it still blows the field away when it comes to battery life, going a full four days between charges.

Running on the older Tizen processor, the original Galaxy lacks the new features found on other smart watches, including ECG, blood pressure readings and the ability to analyze body composition. It also won’t track sleep and isn’t LTE compatible. But it still covers all the essentials, including heart rate monitoring, GPS tracking, and music storage. For those looking for an affordable watch with long battery life, the original Galaxy is still tough to beat.

Why It Made The Cut: The Galaxy Watch 3 offers nearly the same features and functionality of the 4 at a more affordable price.

When it arrived on the scene in August 2020, the Samsung Galaxy Watch 3   represented a pretty significant upgrade over the original Galaxy, improving on it both in features and physical appearance. Like the Galaxy 4, the 3 looks like a classic wrist watch, making it just as wearable for a night out as it is at the gym. It’s also thinner and lighter than the original Galaxy, giving it more of a conventional watch feel.

In addition to its appearance, the Galaxy 3 is loaded with useful fitness tracking features, including heart rate monitor, VO2 max readings, an EKG, and blood-pressure monitoring. It also comes equipped with a host of other useful functions, including sleep and stress tracking. The Galaxy 3 doesn’t match the Galaxy 4 in terms of memory and app compatibility, nor will it analyze your body composition, but if those aren’t deal breakers, then the 3 is a more affordable option than the 4.

Things to Consider Before Buying the Best Samsung SmartWatch

Samsung smartwatches vary in the level of fitness tracking they offer. While all can track basic metrics, including heart rate, fitness activity, and EKG, only the more advanced Samsung watches will allow you to track other fitness activity, including blood pressure and body composition.

While it might be nice to have the top-of-the-line Samsung watch, all that processing power means a shorter battery life. While Samsung’s top of the line Galaxy 4 will get you less than two days before it needs a charge, the original Galaxy boasts a battery life of up to four days.

Q: How much do Samsung smartwatches cost?

The cost of a Samsung smart watch depends on the model. The Samsung Galaxy 4, the company’s highest end watch, starts at about $249.99 for its Bluetooth model and around $299.99 for its LTE model. However, you can find cheaper Samsung watches, including the Galaxy Watch 3, which is about $150. Even the original Galaxy Watch is worth a look,  running at less than $100.

Q: Can I answer calls on my Samsung Galaxy Watch?

Only Samsung Galaxy watches equipped with speakers and microphones, such as the Galaxy Watch 4 and Active 2, will allow you to answer calls on the watch.

Q: Can I leave my phone at home and use my Samsung watch?

You can leave your phone at home and continue to use all of a Samsung smartwatch’s capabilities if you have an LTE compatible watch. With LTE connectivity, you can respond to text messages, use GPS mapping, stream music and even answer voice calls, all on your watch.

Samsung Galaxy offers a broad range of smartwatches. While the Samsung Galaxy 4 Classic may be the top of the line, offering cutting-edge tracking features, plenty of memory, and access to numerous apps, it also comes with a high price tag. Samsung also offers many affordable options, including its Active and Active 2 watches, as well as other earlier iterations of the Galaxy smartwatch, including the original Galaxy Watch.