Experience the exhilaration of flight with both feet firmly on the ground. 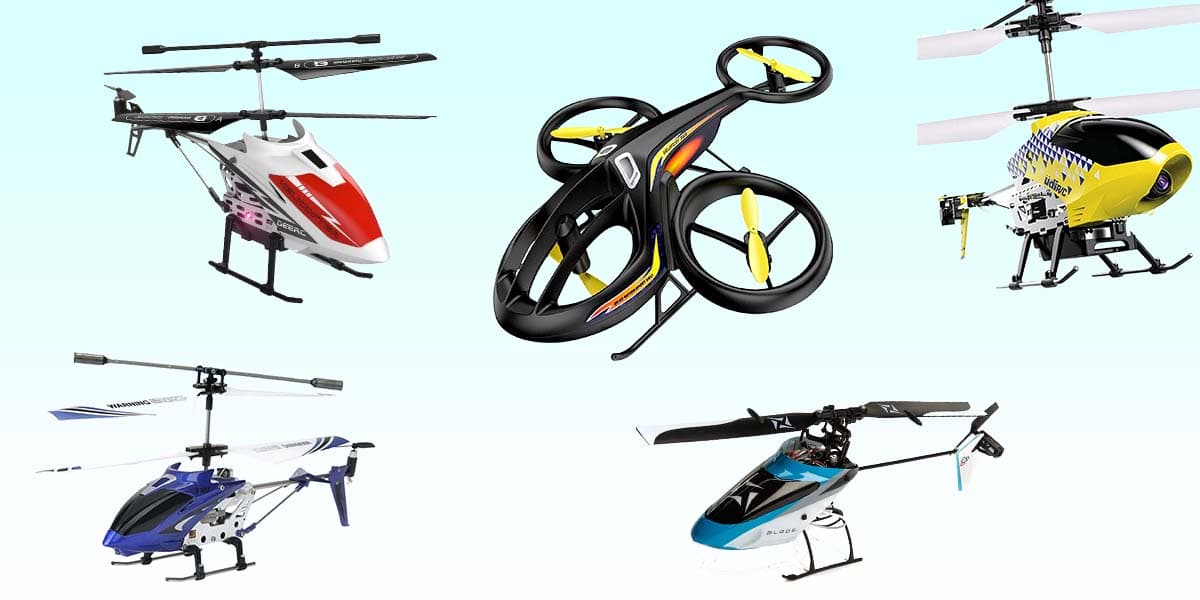 The best remote control helicopters are easy to fly, making them a great hobby for anyone looking to get their child or themselves outdoors. These toys, which measure less than a foot long, are small enough to fly through your living room or soar outdoors. They're designed to suit pilots of all skill levels with altitude stabilizers and controls that allow them to take off and land at the push of a button. More advanced pilots will enjoy drone-like helicopters that can execute barrel rolls, loops, and other aerial acrobatics. Read on to learn more about what features you should look for in these miniature choppers.

How We Chose the Best Remote-Control Helicopters

Having owned and operated several remote-control helicopters and drones, I have experience understanding which designs work and which don’t. Here’s what I factored into my selections:

Durability: Durable construction is key to the helicopter surviving the learning process. Quality remote-control helicopters feature metal construction that can endure the crash landings and collisions that are bound to occur while you're learning how to fly them.

Flyability: I chose helicopters with features that make learning to fly them as easy as possible. These include one-touch takeoffs and landings, automatic sway controls, and the ability to lock a hovering height.

Why It Made The Cut: Four blades give the TF1001 the ability to execute various tricks.

The design of this RC helicopter should appeal to both beginners and experienced pilots alike. The four separate blades that make Syma's TF1001 look like a cross between a helicopter and a drone give it the ability to do things other RC helicopters can't, including flips, barrel rolls, and other tricks. Since you'll need to learn the basics before you can execute those advanced moves, the TF001 also has beginner-friendly features, including one-touch take-off and landing controls and altitude hold. When the battery is low, the TF1001 will land automatically to prevent crashes. In addition to giving it the ability to perform stunts, its four blades also make the TF1001 more stable. Fly time is similar to other RC helicopters at about seven minutes, so plan on purchasing an extra battery if you want to log more flight minutes.

Why It Made The Cut: This RC helicopter’s is known for its impressive acrobatics, while its small size and features make it easier to control indoors.

Flying indoors requires more control to avoid not just damaging the helicopter but also breaking items in the house. No one wants to knock over a prized vase while learning to fly. The lightweight carbon-fiber and polymer frame of the Blade Nano S2 make it both nimble and durable.  At less than 8 inches long, it’s compact enough to maneuver around tight spaces.

The RTF version of the Blade Nano 2 comes with a Blade 6-channel transmitter that allows you to choose from several flight modes, including stability and agility modes. An additional Safe-Z altitude mode helps keeps the Blade Nano 2 at a steady altitude. And it comes with a powerful 150 mAh battery and USB charger, so you can top it up from anywhere.

Why It Made The Cut: The S107 offers many of the same features as other higher-priced RC helicopters.

Cons:
— Not suitable for even light wind

If you're trying out a remote-controlled helicopter for the first time, spending a lot of money on something that may end up lost or in pieces as you navigate the flying learning curve doesn't make sense. The S107 is affordable enough that it won't be the end of the world if you lose or destroy it. It's also one of the easier RC helicopters to fly, thanks to a gyroscope design that automatically adjusts the tail to compensate for left or right sway.

When those inevitable crashes do happen, the S107's metal frame is tough enough to survive the impact. And, since it has two selectable frequencies, you can fly more than one S107 at a time. The S107 does lack the one-touch take-off and landing and altitude hold features found on pricier helicopters, but for the price, it's a great RC helicopter for newbies trying to earn their RC pilot wings.

Why It Made The Cut: This remote-controlled helicopter sports a camera that sends video directly to your phone.

Despite its compact size — it measures less than 11 inches long — Cheerwing’s U-12 offers a surprising number of features. It comes equipped with a camera that connects to a smartphone, allowing you to receive live video footage or snap pictures.

The U12 also comes with a variety of settings that make it easy to operate, including one-touch take-off and landing buttons, an altitude hold mode, and two speed modes. Warning lights let you know if the U2 is out of range of the controller or if the battery is low, helping to prevent damage and loss.

RC helicopters will inevitably take a beating, and the U12 is built to withstand that abuse with metal blades that are less susceptible to breaking if you accidentally slam it into a tree or the side of a house.

Why It Made The Cut: The DE52 has a long fly time of up to 10 minutes and comes with two batteries.

Batteries and fly times are a delicate balance. Longer-lasting batteries weigh more, which is why most remote-controlled helicopters only get six or seven minutes off a single charge. DEERC has found a way to extend that, getting a full 10 minutes on a single charge. What's more, the DE51 comes with two batteries, doubling that fly time to 20 minutes before needing to pause for a recharge.

In addition to its longer flight time, the DE51 also comes with features that make it easy for beginners to fly, including one-touch take-offs and landings and an altitude hold that will cause the helicopter to hover in place. There are also some fun extras, including interchangeable shells that allow you to change the DE51's color, perfect for households operating more than one at a time. And, since it supports three channels, you can fly multiple copters without interference.

Things to Consider Before Buying a Remote-Control Helicopter

Remote-control helicopters come equipped with designs that make them easy to fly, even for those who have never operated one before. Their blades use a gyroscope design that works as a stabilizer, preventing the helicopter from drifting uncontrollably. Features that include one-touch take-offs and landings, and altitude locks that hold the helicopter at a certain altitude, also make the helicopters easier to operate while limiting the number of crashes that can potentially damage the machine.

RC helicopters come equipped with rechargeable batteries. Since electric helicopters are only able to carry lightweight batteries, most have a relatively short fly time of about six to seven minutes. Given that most helicopter batteries need about 40 minutes to recharge, the ratio of downtime to actual fly time is high. If the helicopter has a removable battery, you can purchase multiple batteries to extend the total fly time.

Learning how to fly a remote-control helicopter takes practice. Expect to have a fair amount of crash landings and collisions with the sides of buildings and trees as you move through the learning curve. A good remote-control helicopter should be able to endure this punishment. Toy helicopters with metal construction and blades that will bend without breaking are a better option than those made primarily with plastic.

Q: How much do remote-controlled helicopters cost?

That depends on the type of helicopter. Affordable models range between $25 and $60. High-end remote-control helicopters for those with advanced RC helicopter flying skills can cost hundreds of dollars.

Q: How high can an RC helicopter fly?

Q: How long does it take to learn to fly an RC helicopter?

Learning to fly an RC helicopter that's designed for beginners doesn't take long. These helicopters are equipped with blade designs that add stability. They also have controls that make them easier to operate, including one-touch take-offs and landings, and altitude hold features.

The best RC helicopters don’t require hours and hours of practice before you can fly them. Remote-control helicopters such as the SYMA TF1001 Remote-Control Helicopter and Cheerwing S107/S107G Phantom have designs that make it easy to learn how to make them take off and stabilize. The TF001 also has more advanced features, allowing new pilots to conduct acrobatics after they’ve mastered the basics.