Don’t wait to hear about it on the local news. 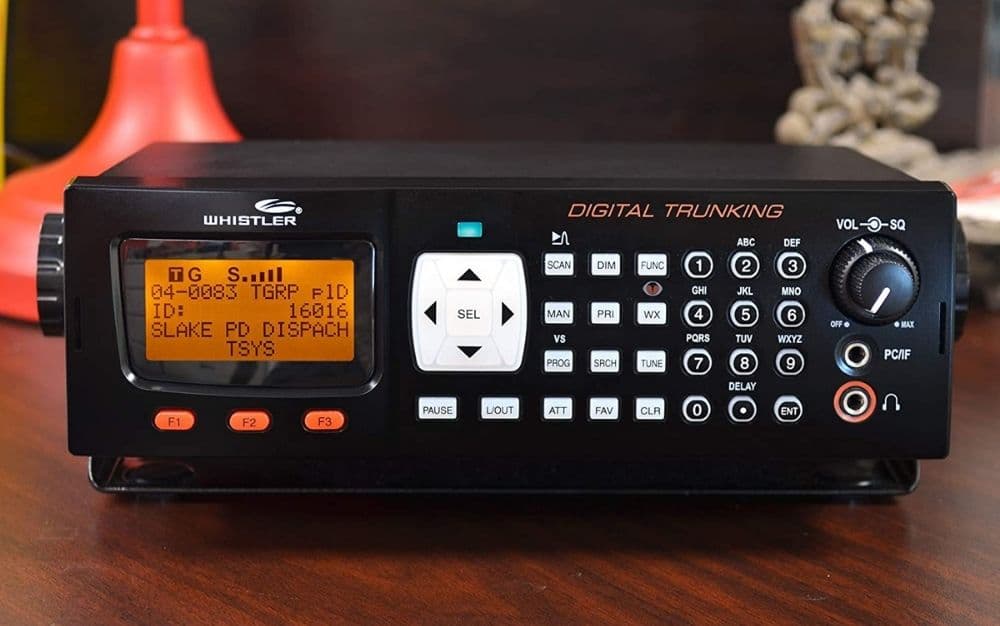 The best police scanners give you the 411 on police activity in your neighborhood or on the route you're traveling, helping you to steer clear of potential traffic hazards or dangerous situations. Unlike the crackly broadcasts of old analog scanners, today's police scanners use digital technology to broadcast clear static-free transmissions. Many make finding local frequencies easy with access to vast GPS databases that allow them to automatically populate local channels on the device automatically.

Police scanners range from desktop models to handheld scanners that resemble walkie-talkies. There are even apps that will turn your smartphone into a police scanner. Read on to find out more about what you should look for in a good police scanner and find out why the models below are the best police scanners.

How We Picked the Best Police Scanners

Before you consider buying a police scanner, you should know that police scanners are legal in some states and not in others. While it may be legal to own a police radio, using one in your car or downloading an app may not be allowed, according to NBC News. Police scanners are also not allowed to be used to help commit a crime. With those caveats in mind, we considered a few crucial factors when selecting police scanners for our list of the top models. Since most law enforcement and emergency services agencies use or are migrating to digital frequencies, we did not include any analog police scanners on this list.

Likewise, many agencies employ trunking, so we only chose models that can pick up trunked frequencies. The best police scanners are able to find frequencies without a significant amount of effort from the operator. With that in mind, we chose mainly models that are able to automatically populate local frequencies by accessing a database. We also favored those that include GPS devices that allow the police scanners to automatically update their list of frequencies based on location, eliminating the need for the user to manually search for frequencies while driving. When possible, we chose police scanners that offer additional features, such as record and playback functions and those that support trunking.

Why It Made The Cut: An easy-to-use design that automatically populates frequencies coupled with cool additional features make this handheld the best all-around police scanner on the market.

Cons:
— One of the more expensive police scanners on the market

With a user-friendly design that makes it easy to locate and a host of useful additional features, it's little wonder why Uniden's handheld digital scanner is the best you can buy. One of its best features is its ability to make locating frequencies easy. Simply enter the zip code, and it populates the available channels for you from Uniden's database, eliminating any need to fiddle with dials or buttons. With its GPS receiver, it will also automatically populate available frequencies as you move through different locales, eliminating the need to fiddle with dials while you drive. This model also incorporates Uniden's Close Call RF Capture feature, which continually scans the area to find frequencies that are in close proximity, such as a conversation between two people using handheld radios.

This scanner includes several useful additional features. This Uniden scanner continuously records, allowing you to play back up to four minutes of recent transmissions. You can program the scanner to alert you when it locates a new channel or unit frequency. It also allows you to program different colors, flash patterns, and tones for specific channels, Close Call hits, and emergency alerts. The Uniden HomePatrol handheld is powered by a rechargeable lithium-ion battery that lasts up to 8 hours on a single charge.

Why It Made The Cut: The Beartracker seamlessly combines a quality CB radio with an impressive police scanner, making it a worthy choice for those who demand both functions.

Pros:
— Functions as both a CB and police scanner
— Built-in GPS automatically adjusts for location
— Has access to Uniden’s impressive database of frequencies
— Can also provide radar detection functions

While it may be pricey, the Uniden Beartracker’s additional cost is worth it for those who want to send as well as receive transmissions. It functions as a hybrid scanner with a full 40-channel CB radio. The CB works seamlessly with the scanner, allowing you to switch between the two with the push of a button. While that alone makes it worth the extra price for someone who values both the functions of a scanner and a CB radio, there are other features that make BearCat a great choice.

It comes equipped with a built-in GPS that automatically selects nearby channels from the Uniden database as you’re driving, so you don’t have to fiddle with knobs as you move from location to location (Uniden’s impressive database covers the U.S. and Canada and is updated weekly). The BearCat supports trunk tracking and will also broadcast weather alerts from NOAA — though it’s important to note that the Beartracker doesn’t support manually entering frequencies.

In addition to functioning as a CB and police scanner, the Beartracker also doubles as a radar detector with a warning system that lets you know when it detects nearby public safety transmissions. Since it’s designed for use inside a vehicle, the Beartracker is powered by your vehicle’s 12-volt power source.

Why It Made The Cut: With its full-color touchscreen and small size, this digital scanner is one of the easiest to use.

Pros:
— Easy to set up and use
— Portable size makes it ideal for taking on the road
— Full-color touch screen makes it easy to navigate
— Ability to record and playback transmissions

Uniden’s HomePatrol is one of the pricier police scanners you can purchase for your home, but its design allows you to get so much more out of it than cheaper analog models. Setting up the HomePatrol is simple when compared to other home police scanners. There’s no need to program frequencies or hunt for channels. Simply enter your zip code, and it finds the channels for you using the Uniden database. A range knob allows you to adjust the scanner to pick up transmissions from as little as one mile away up to 30 miles away. In addition to police and emergency services, it also allows you to listen to S.A.M.E weather alerts.

A touch screen with a full-color display makes it easy to see what channel you’re listening to and switch from channel to channel. The HomePatrol also gives you functions other scanners don’t, most notably the ability to record and playback transmissions via an SD card.

While the HomePatrol is designed to work from your home, since it functions off of rechargeable lithium-ion batteries and is small enough to fit into a coat pocket, it can tag along with you when you leave home.

Why It Made The Cut: This police scanner offers everything one needs for monitoring emergency services agencies from home while remaining at a reasonable price.

Cons:
— This scanner gives you all the functionality you need for a digital scanner that’s limited to home use at a reasonable price.

The Whistler doesn't have the automated zip-code-frequency searching that other digital scanners have, but that isn't really a feature you need if your scanner is sitting in one location. You can manually program frequencies or use the Whistler software by downloading it from the Whistler site and loading it onto the scanner via a USB cable.

Once set up, this scanner makes it easy to group frequencies by preference so you can cycle through them quickly. A digital display clearly shows signal strength, frequency, and the name of the channel, while a memory backup ensures you won't lose your presets in the event of a power outage.

This scanner also goes beyond checking police frequencies to include robust storm monitoring. Its built-in Skywarn feature allows you to access common emergency weather frequencies used by storm spotters, so you can get first-hand weather information. Other useful features include a Digital AGC that automatically boosts low audio levels and the ability to scan trunked radio frequencies. The Whistler WS1065 plugs into a standard power outlet.

Why It Made The Cut: This app is ideal for smartphone owners who want to monitor police and emergency services transmissions without paying a dime to do it.

Pros:
— The app can be downloaded and used for free
— Allows one to access transmissions from all over the world
— Works with both Apple and Android smartphones

Cons:
— Limited to the frequencies that are included in the app’s database

While Scanner 5-0 won't fulfill the needs of those who are serious about monitoring a police scanner, it's a great cheap police scanner for someone who wants to listen in occasionally. Once installed, you can use the app to search for feeds by state, county, or even country, then select the feed and listen to it directly on your smartphone. The app even caters to newbies to police scanning by including a key that helps them decode police codes.

This functionality makes it ideal for homeowners who may not tune into a police scanner on a daily basis but want to know what's going on when three police cars suddenly appear on their normally quiet street. Unlike a standard police scanner, you can listen in on transmissions from emergency services from around the globe regardless of where you are. You can download and use the app for free if you don't mind being bombarded with ads. For $2.99, you can use the app ad-free and gain access to a few additional feeds.

Things to Consider Before Buying a Police Scanner

There are three different types of police scanners: handheld, mobile, and desktop. Desktop police scanners, per their name, are designed to sit on a desktop and plug into a standard 120-volt outlet. Handheld models, in comparison, look very similar in size and weight to walkie-talkies, making it easy to carry them with you, while a car police scanner is designed to install into your vehicle's dashboard.

Police scanners come in both digital and analog models. Analog scanners can only pick up analog signals. With more and more public safety agencies using digital transmissions, analog police scanners have become mostly obsolete, with the exception of some small towns and rural areas.

Digital scanners are capable of picking up digital signals, which have better quality and a longer range than analog signals. Many digital scanners support trunking, a technology that allows users to "share" a set of frequencies. Since many public safety agencies use trunking, you'll need a digital scanner that supports this technology in order to listen in on their communications.

Many police and fire scanners have features that make them easier to use. Some police scanners allow you to access a database of frequencies that automatically loads preset frequencies onto your device based on a national database, eliminating the need to program the scanner manually. Some high-end portable police scanners even have built-in GPS systems that automatically change the scanner to different channels as you travel from jurisdiction to jurisdiction. A playback feature that allows you to replay several minutes of a broadcast is also a useful additional feature.

Q: Is it legal to own a police scanner?

Since police continue to use digital or analog radio for communications, they are still a useful way for the average citizen to monitor police activity in their area. They’re also an effective means of monitoring the weather during extreme weather events.

No. The Federal Communications Commission prohibits police or anyone else from monitoring cell phone conversations via a police scanner.