Gain the power to see in the dark with one of these top-rated devices. 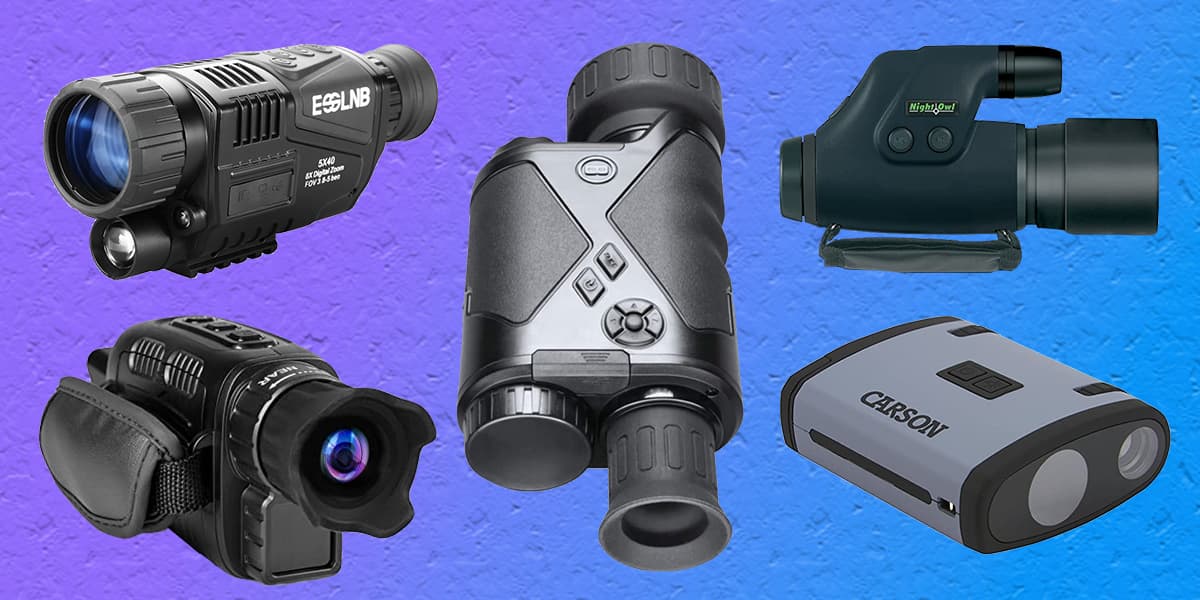 While we may associate night vision with covert military operations, there are plenty of good reasons for the average person to have an instrument that allows them to see objects and animals in the darkness.

Night-vision monoculars work by collecting infrared light from the moon and the stars, and amplifying it, allowing you to see distances up to three football fields long at night. Whereas night-vision goggles and monoculars were once a cutting-edge technology that carried a high price tag with them, today’s night-vision monoculars are actually very affordable, making them an ideal companion for backpackers, bird watchers, and hunters.

Ahead, learn more about what features to look for in an IR monocular and find out why the models below are some of the best night-vision monoculars available.

How We Picked the Best Night-Vision Monoculars

Unlike a set of binoculars or a standard monocular, a night-vision monocular is specialized to allow you to see in the darkness. While the monoculars we chose may not be the best for daytime viewing, they provide superior nighttime vision. Keeping that in mind, we chose monoculars that are capable of collecting ample infrared light to allow you to see, even in total darkness. Since these instruments are often used deep in the woods, away from civilization, we included models that are compact and lightweight, making them easier to tote with you on a journey into the backwoods, whether hunting, backpacking, or birdwatching. Since many like to record their nocturnal adventures, we also included monoculars that allow you to take photographs and even record video through the monocular, which can then be transferred to a smart device or computer. If you prefer another option, here’s our guide to the best night-vision goggles.

Why It Made the Cut: Bushnell sets itself apart from the competition with its ability to stream live footage to a smart device via WiFi.

Its long range, coupled with the ability to record and even stream video, and a price that’s not outrageous make the Bushnell Equinox Z2 the best all-around night vision monocular on the market. A good monocular should be able to provide excellent range and Bushnell’s is outstanding.

With its 6X magnification, it can spot animals and objects from up to 1,000 feet away. While that in itself is impressive, what really sets the Bushnell apart is its ability to take video and pictures. The monocular can capture high-definition 1080p video, which you can store on a micro SD card and later upload onto a smartphone or tablet. What’s more, you can also stream that live video directly to a device via the monocular’s built-in WiFi, using the Bushnell Equinox app, which even allows you to control zoom remotely. Though the stream can be a bit laggy, it’s still a great feature to have if you happen to be using the monocular with a tripod.

Like other night-vision monoculars, the Bushnell Equinox Z2 comes equipped with a built-in infrared illuminator, which allows you to get clear pictures, even in total darkness. The Equinox also gives you a few more options; in addition to its 6X base magnification, which provides maximum range, the Equinox is also available in 4.5X and 3X magnification, which offer less magnification and a wider field of vision.

Why It Made the Cut: The Creative XP is the best choice for a monocular at this price point that can see in total darkness.

The Create XP comes with an impressive level of magnification, letting you see up to 650 feet away, thanks to its 4X-digital zoom and three-times optical magnification. There’s also a larger 32-gigabyte SD card, which allows you to store a lot of pictures, and unlike many monoculars that require you to hook up the camera to a computer to view footage, you can view pics right from the camera via a 1.5-inch display screen.

The Create XP also boasts good battery life, with a running time of up to six hours on a single charge. In terms of size, at about six inches long and two inches wide and 2.5 inches high, the Create XP is compact enough to carry in a pack or even keep in one’s hand so it’s at the ready while trekking through dark woods.

Why It Made the Cut: The Night Owl offers impressive magnification while still maintaining a wide field of vision.

Pros:
— Wide field of view at high magnification
— Can be operated with one hand
— Works in blackout conditions

If you don’t mind the fact that it won’t allow you to take pictures or zoom in and out, then the handheld Night Owl NOXM50 is an excellent option for viewing nighttime animal activity. The monoculars use a large lens to provide excellent magnification while still maintaining a pretty good field of view. It provides 5X magnification with a field of vision of 15 degrees, which is much larger than many monoculars at this level of magnification. That at least partly makes up for the fact that the Night Owl can not take pictures or video, nor does it offer a digital zoom.

A built-in infrared illuminator, powered by a 3-volt lithium battery, provides sufficient viewing in blackout conditions. The larger lens on this device makes this monocular bulkier than most at nearly 8 inches long and 4 inches wide. Though it’s larger than other monoculars, it still maintains a relatively light total weight of about a pound.

The Night Owl comes equipped with a strap and large focusing ring, making it easy to operate with one hand, while a rubberized coating on the outside makes gripping this larger monocular more comfortable.

Why It Made the Cut: This compact night-vision monocular is small enough to fit in a pocket but still produces a wide field of vision and crisp images.

The compact size and broad field of vision offered by this set of night-vision monoculars from Carson makes them ideal for hikers, backpackers, or hunters who don’t want to lug a heavy monocular around. The MiniAura weighs just 3.4 ounces and measures just 2.5 inches long and 2.2 inches wide. With such a compact build,  this monocular is small enough to fit in a pants pocket, which you can do safely, given that it comes with a soft carrying case that protects it during transport.

Despite its small size, the MiniAura gives you a wide field of view thanks to a broad viewing angle of 19 degrees. Though the MiniAura lacks the range of some larger monoculars, it’s capable of seeing objects up to 82 feet away in complete darkness with its 1x magnification. Plus, it creates high-definition images and allows you to control infrared intensity at the push of a button. The MiniAura also unfortunately  lacks some of the features found on a larger night-vision spotting scope. It doesn’t have any video or picture taking functions and there is no zoom function. Still, for those who want a night-vision monocular that works well and won’t add weight to their pack, the MiniAura is a great option.

Why It Made the Cut: The ESSLNB offers robust functions for taking pictures and video in the dark.

Pros:
— Records sound and video
— Can connect to a TV
— 8X zoom allows you to adjust field of vision

Cons:
— High level of magnification can make it difficult to track moving animals

If you’re looking for a set of night vision monoculars with the ability to take videos and pictures, then the ESSLNB monocular might be a great choice for you. It gives you the ability to take pictures or shoot video complete with sound, all of which is stored on a 16 GB SD card. What’s more, you can also view pics and playback video directly from the camera via a built-in 1.5-inch screen, so you don’t have to wait until you return to civilization to view your video. It also comes with multiple cables that allow you to connect to a computer for downloading footage, or connect directly to a TV to playback video. The cameras will also time and date stamp video and pictures, which is handy for tracking your nocturnal adventures.

The 40mm lens allows for 5X optical magnification and 8X zoom magnification, allowing you to target objects and animals from up to 656 feet while also adjusting the field of view. Plus, the infrared illuminator allows you to move between nine different brightness adjustments, which is key for setting the infrared level to suit the lighting conditions.

Things to Consider Before Buying a Night-Vision Monocular

Magnification: Magnification for a set of night vision monoculars ranges from 1X (which magnifies an image 100 percent over what you see with the naked eye) to up to 6X (600 percent magnification). Whether it's a monocular or set of binoculars, most people tend to choose the highest magnification they can afford. This is a mistake when it comes to night-vision monoculars. Yes, a 6X monocular will allow you to spot targets three football fields away, but you may not be able to get a full view of any animal at closer distances 100 to 200 feet away.

In comparison, a 1X or 2X monocular may not allow you to pick up animals at long distances, but you’ll have a much easier time tracking objects and animals that are at a closer range. With this in mind, it’s crucial to consider how you’ll be using the monocular and choose the right lens magnification to suit those needs.

Zoom: In addition to the fixed magnification of the monocular lens, most night vision monoculars also allow you to zoom in digitally. Zoom powers range from 3X up to 8X, allowing you to zoom in or zoom out and change the size of the monocular’s field of vision, so you can continue to track an animal even if they move closer or further away from you. This makes them ideal for hunting or bird watching.

Video and Photos: Some night-vision monoculars not only give you the ability to see at night but also to record what you’re seeing by giving you the ability to take video or pictures. These night vision cameras come equipped with SD cards for storing this footage. Some also come equipped with built-in WiFi that allows them to stream footage to a smart device in real time. Whether you want a night-vision monocular that’s equipped to capture videos and photos will depend on what you intend to use your monocular for.

Q: Are monoculars better than binoculars?

Binoculars offer a greater field of vision due to their use of two lenses and hence both of your eyes; however, binoculars are a better choice for night vision as they allow you to maintain your natural night vision in one eye since they only have a single lens. Monoculars are also much lighter than binoculars, making them easier to carry around your neck. Some are even small enough to fit in a pocket.

Q: What is the strongest magnification for monoculars?

Q: Is a monocular good for stargazing?

Monoculars are actually great options for stargazing, especially since they are much more portable than a telescope. The portability makes it easier to take them into remote areas away from surface glow that can make it more difficult to view the nighttime sky. While some models have a magnification that could be too high. Keeping that in mind, a monocular with an eight times magnification and a 42mm lens is ideal for viewing the stars.

Bushnell’s Equinox Z2 gives you options when it comes to magnification and lens size, as well as the ability to record live video footage or even stream footage in real time via WiFi, making it the best overall night vision monocular you can buy right now. Those looking for an inexpensive night-vision monocular should consider the affordably priced Creative XP Digital Night-Vision Monocular, with its 5X optical magnification and 8X digital zoom.